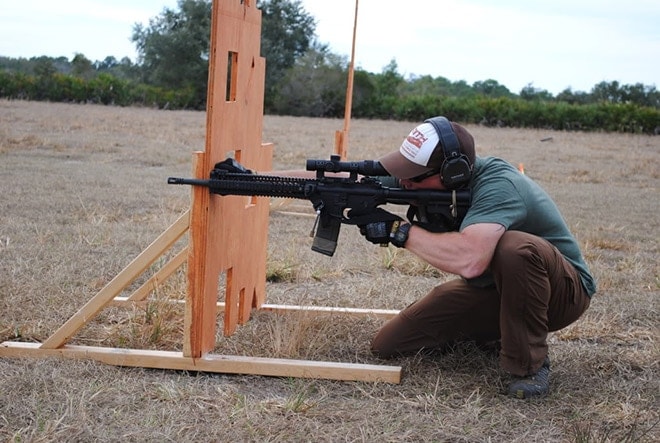 If this is something you might end up doing, you may as well practice to do it well. (Photo: Andy C)

I have never met anybody who loves doing dry fire. It’s understandable — by nature this is a repetitive activity. Maybe this is why so few people actually do it despite it commonly being suggested as one of the easiest and cheapest ways to improve shooting performance.

I’ve also never met anybody who performed really well in shooting competition who didn’t dry-fire. While I’m sure such people are out there, they are few in number and wildly gifted in skill. Your average shooter can benefit enormously from regimented dry-fire practice.

I’m not going to espouse the benefit of dry fire here as I’m sure you’ve heard it all before. If that hasn’t compelled you to actually practice dry fire, then another article isn’t going to do the trick. Rather, this article is about making dry fire less boring and hopefully more effective. 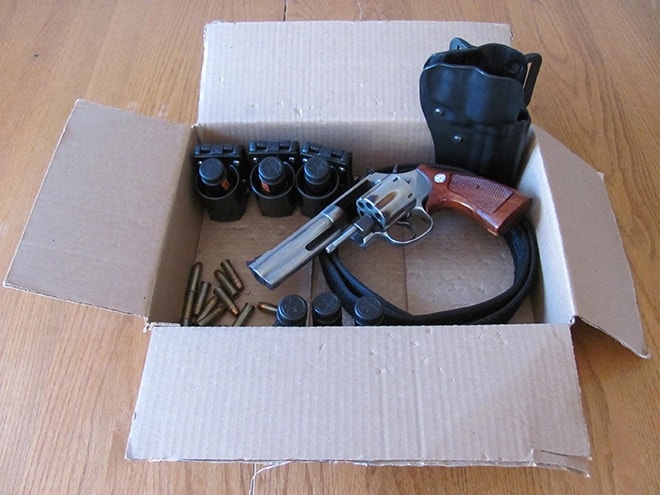 My practice box, containing everything I need for a good session; setting the box at my feet saves me time in picking up snap caps. (Photo: Andy C)

Good dry fire practice has to be engaging. We’re not machines  — doing the same mind-numbing training techniques will reduce their effectiveness. Our capacity to benefit from such practice is directly tied to how much we can enjoy doing it. In this sense, dry fire is much like physical exercise. If we practice in crappy conditions, we not only ingrain bad habits and act sloppy, but we’re also a lot less likely to continue dry fire practice at all. You want to create a positive feedback loop that compels you to dry fire because you like the results you’re getting.

In the end, this stuff won’t make dry fire riveting, but it will help break up the monotony.

Dry fire time isn’t TV time, sit down time, or “squeeze it in during other activity” time. It should be designated dry fire time. That sounds strict and boring, and it might be, but why waste fifteen minutes half-assing dry fire and reinforcing bad habits or not paying attention when you can derive an actual benefit from just five minutes?

If your focus starts to wane, your technique will likely slip too. And it’s been repeated endlessly by people smarter than myself that, what you practice, you will enact when it counts. It doesn’t matter if you practice for competitive shooting, self-defense or hunting. When it actually matters, you don’t want your performance to reflect you going through the motions absent minded. 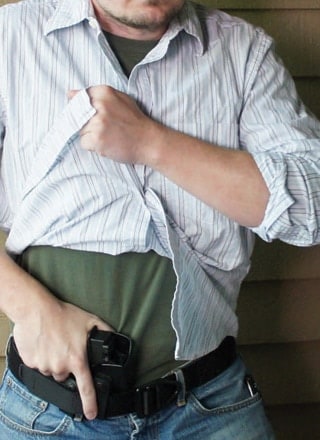 Drawing from your drop-offset speed holster won’t help you defend yourself, so practice what you plan to use. (Photo: Andy C)

As a result, I find keeping your dry fire session focused and short makes a huge difference. Got five minutes? Grab your gun of choice and get to clicking while leaving out the external distractions. The shorter time spent makes you more likely to actually go back and practice again later because it feels like less like a grind and you’ll be mentally more present.

A lot of people dry fire standing square to a theoretical target, hold their gun in their preferred way, then repeatedly pull the trigger while half-heartedly trying to ensure the sight remains level. This eventually progresses to pulling the trigger while sitting down watching TV and intermittently trying to “shoot” characters we don’t like.

Unless you spend a lot of time shooting from a couch, stop doing this. It’s bad practice and you’re wasting your time.

What does make sense is to practice dry fire from a variety of practical positions and stances. People often neglect to train on this and lament when they miss shots from anything other than a perfectly squared-up standing position.

Practice shooting from any position you might reasonably encounter. The perfectly still, front-facing profile shot is actually rare outside target ranges. If you shoot IDPA, practice leaning around cover. If you do multigun, get into the habit of spending some time in modified prone. If you’re hunting, train to mount and pivot towards targets outside your current facing (and don’t smash a lamp swinging your shotgun). This obviously introduces a huge range of potential stances, but just a short list of things you should be trying at a minimum:

If you keep your sessions short, maybe you can spend a designated session every now and then on training to shoot from ‘unorthodox’ positions. But I prefer to mix it in with my standard trigger control drills.

I’m mostly a revolver shooter. In competition, a significant factor to scoring well is reloading technique yet I still know a lot of revolver shooters who mostly dry-fire standing with their gun in hand, no other gear, simply pulling the trigger over and over. Why no belt? Where’s the moonclip holders? How come your gun isn’t being drawn from the holster? Why do you pull the trigger more than six times without reloading? The bad habits are obvious.

In keeping with the short and focused practice sessions, make them count by using your actual equipment. If your rifle has a sling, wear it, and practice intermittently using it. If you have to draw a handgun at the start of an encounter or stage, then wear it as you expect to be when the time comes and learn to find your sights properly. And go through the motions of reloading after the appropriate number of trigger pulls. 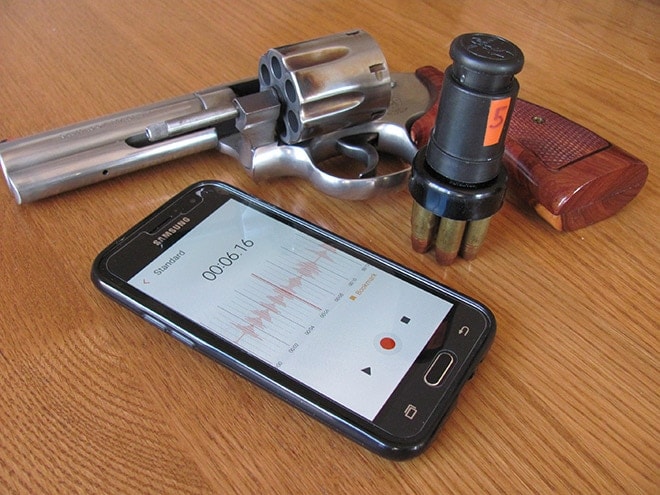 Your phone is all kinds of useful for dry fire. (Photo: Andy C)

It might be a hassle to get on a gun belt and magazine pouches for five minutes of practice, but on the other hand, you don’t practice with a wooden gun, do you?

Dry fire is important for trigger control, but trigger control is only one element of what makes precise shooting. Drawing, mounting, and other movements are important too, but consider environments you’re likely to use your firearm and think about how you need to handle a gun there. There’s lots of practical experience you can gain during dry fire that will leave you better prepared for real world situations.

For example, when I practice for multigun matches, I can almost guarantee at some point I’m going to have to put my barrel into a barricade cutout or brace on a wall. So I practice between trigger pulls occasionally putting my gun smoothly in an awkward position. If you hunt, you’ve likely braced your rifle against a tree as an improvised rest.  There is no reason not to get used to doing it at home so you can develop a smooth technique.

For defensive gun users, consider drawing your gun from the unpleasant position of being knocked to the ground and on either side, your stomach, or back. Being ambushed and attacked is a common criminal M.O. Can you still get out your defensive firearm? How much better can you get at it with a small amount of dedicated practice?

By practicing manipulation of your gun like this, you’re less likely to mess it up when you need to maneuver precisely, and won’t feel as awkward. Additionally, your comfort level with more difficult gun movements might open opportunities you wouldn’t have been warranted otherwise.

If you carry a cell phone, you have a suite of options readily available for you to enhance your dry fire sessions. A big one is a simple stopwatch and timer. How long does it take you to reload from slide lock right now? Can you reduce that by a full second with practice? The likelihood is pretty high if you put in some work. Rather than having fuzzy goals of “feeling” faster, set an alarm to sound in progressively shorter time and try to have completed a variety of tasks before it goes off: drawing, aiming and firing, reloading cartridges, how quickly you can fire X times, clearing a malfunction and so on.

It’s important to set up challenges with concrete metrics, as it will give you a proper goal to strive for and also create that positive feedback loop mentioned above as you improve or notice you’ve regressed!

There’s plenty of dry fire aids beyond this article’s scope, like laser training systems. These tend to cost a bit of money, but consider what an average trip to the range costs: if you dry fire three times a week and use whatever your preferred practice aid is each time, how quickly has it recouped its cost in ammo better spent?

Dry fire isn’t sexy or thrilling. You can’t doll it up much and keep it effective. But you can make it interesting and practical enough that you keep going back and start deriving serious benefits. Paradoxically, the keys to benefiting from dry fire are consistency and variance: taking the time for consistently focused practice in short sessions, and varying your activity enough to keep it from being too boring with gun handling drills, position changes, and so on.

Ultimately, dry fire will never be super exciting, but it will always be super important.