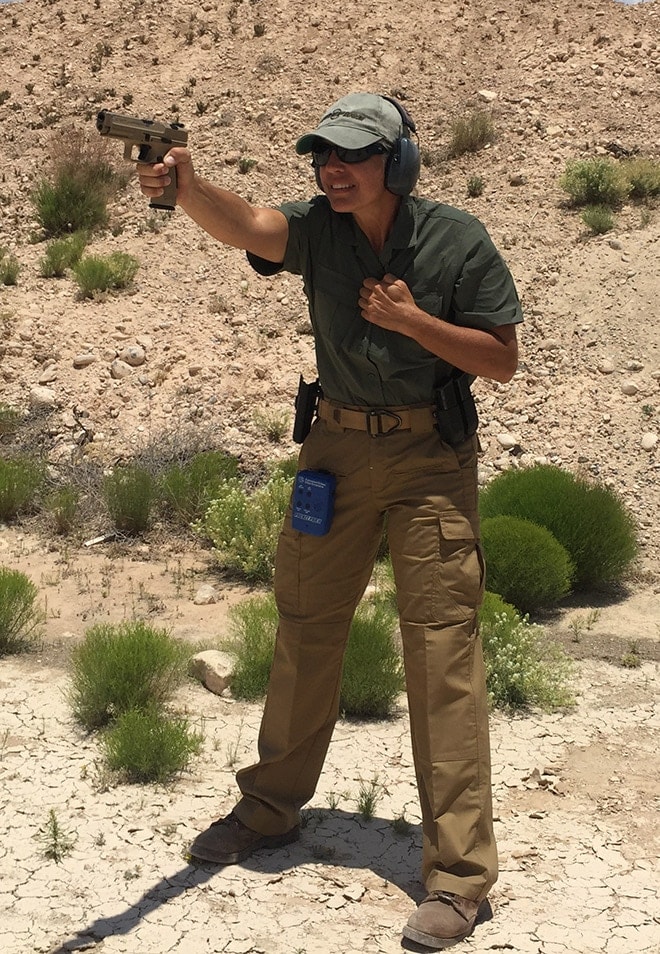 Practicing one-handed shooting safely is of paramount tactical importance. Many shooters reflexively engage a threat one-handed, so why not practice and master it? (Photo: Team HB)

One-handed handgun shooting is a technique I use often and teach early on with new shooters. When training with the intent to be handy with a pistol for defensive shooting, there are lots of reasons to make friends with single-handed fire.

For starters, I’ve seen firsthand that people tend to draw and fire with one hand, without giving it much thought, when surprised by a threat. Knowing this, it’s logical and responsible to practice a technique that increases the likelihood that shots will impact as intended, and not angle off to the opposite side from the gun-wielding hand, as is the tendency of most untrained shooters using this technique.

Use of cover should be in the mental plan for defense when possible. Firing with only the hand that’s closest to the edge of cover can maximize the protection afforded by that barrier, especially where exposure of the head is concerned. If that means firing with the non-dominant hand, or as some call it, the other strong hand, then it’s a darn good idea to practice that way. 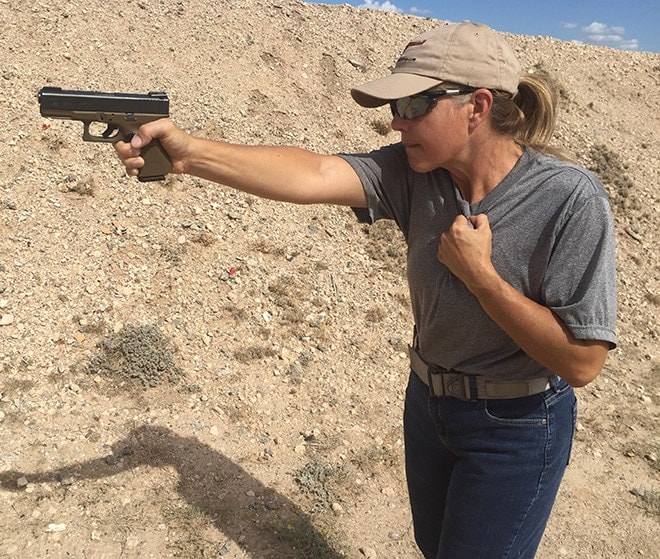 Anchor the non-shooting hand. I prefer front of shirt for a few reasons. (Photo: Team HB)

Lives of good people have been saved by firing and even reloading with the “other strong hand” in a gunfight, after the dominant limb became disabled. That should be motivation all by itself, but if it’s not, here’s yet another good reason to practice one-handed shooting:

The first consideration when firing one-handed is to keep the other hand out of the way. Don’t just let it hang at your side. For safety and tactical reasons, in that order, anchor it somewhere.

My favorite option is one shared by CJ Caracci, former SEAL being one line on his long list of credentials. I just grab a handful of shirt over my sternum before I draw. This method not only indexes my hand where I can’t possibly shoot it out of negligence, it also helps me balance, protects the solar plexus, and keeps that hand poised for a fast strike if necessary. For these reasons, “grab shirt” is my go-to strategy. Other options include anchoring the hand on your belt behind your torso, or, as Gunsite Academy teaches, wrapping the fingers around the back of your neck, keeping that elbow forward toward the threat—and who wants to run into an elbow? This technique does assume your muzzle will never point upward toward the elbow, especially when firing from retention position. 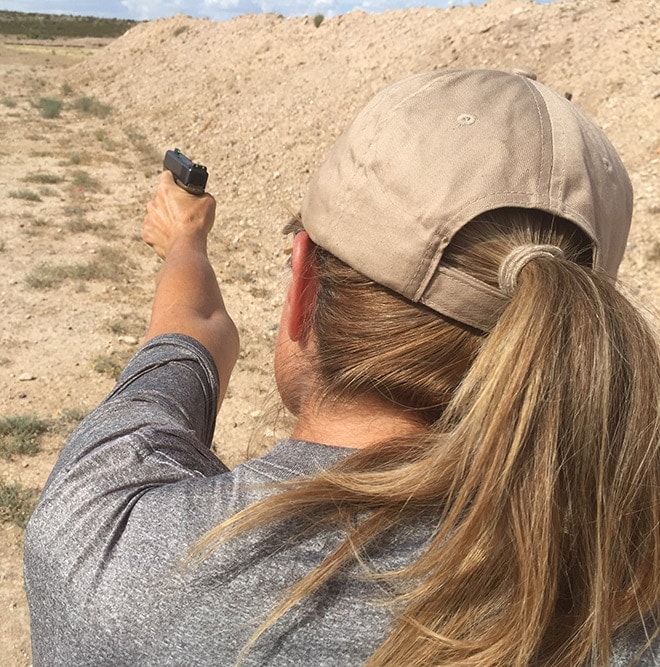 Practice with the non-dominant hand too. (Photo: Team HB)

With the off-hand secured and weapon drawn, stance is the next building block of good one-handed shooting, especially where multiple shots are involved. Keep feet shoulder width apart, or more if it feels more balanced. Knees are soft, neither locked nor bent. Bend forward from the hip, pressing the weight of your upper body into the gun. Extend the arm to achieve sight alignment and sight picture, with the feeling that you’re pushing the front sight toward the bullseye. Keep the wrist, and, if possible, the elbow stiff. If one of those two joints is arthritic, doubly stiffen the other for maximum recoil control and to prevent malfunctions in semi-auto pistols.

Your job is to keep the front sight from drifting off target until after the “bang,” recover the front sight to the bullseye as quickly as possible, and repeat. It’s simple, and really, that’s the shooter’s job even with two hands. Thing is, you’ll likely find that the sight wants to drift in the direction opposite of the side you’re firing from. Left-handed shooting is likely to develop right-oriented groups, for example. 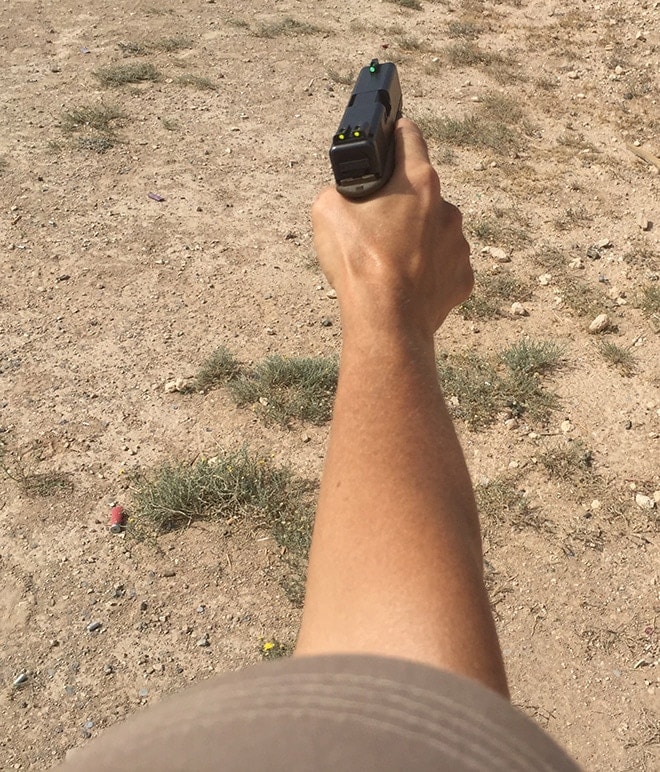 Keeping your eyes open and concentrating on keeping the front sight on the bull will prevent this most common form of inaccuracy. A high grip and good trigger press are working assumptions here.

Many people, myself included, find it easier to tilt the top of the firearm slightly inward, 20 to 30 degrees. At typical defensive distances, the slanted sight picture doesn’t matter. This bit of inboarding exploits the strength of the forearm to maximize stability, especially during recoil. Give it a try. You’ll only look like a gangster if you hold the gun horizontal, which is just… not very smart.

After putting a few rounds downrange with your usual shooting hand, switch hands, secure the dominant hand, and fire with the other. It’ll feel awkward; do it anyway. You’ll likely surprise yourself with success.

Got it down? Try advancing or retreating on an oblique line toward or away from the target, shooting as you move. Keeping a front sight focus will continue to serve you in the accuracy department. Moving and firing is a topic for a whole other training session; please go no faster than your skill level and nimbleness allow. As always, Guns.com and I aren’t responsible for any unintended consequences of your practice of the techniques described here. 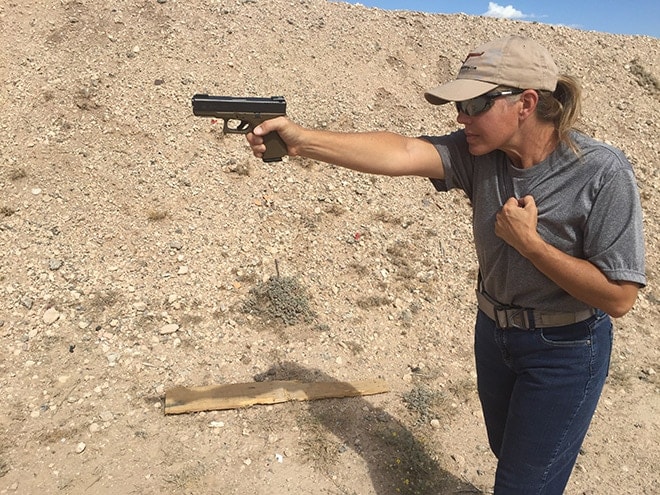 Advancing toward cover and shooting — keep the front sight on target at all times. (Photo: Team HB)

Becoming adept at shooting one-handed is enjoyable, and will put you in good stead for the day you may need to use one hand or the other, by itself, to make that life-saving shot.