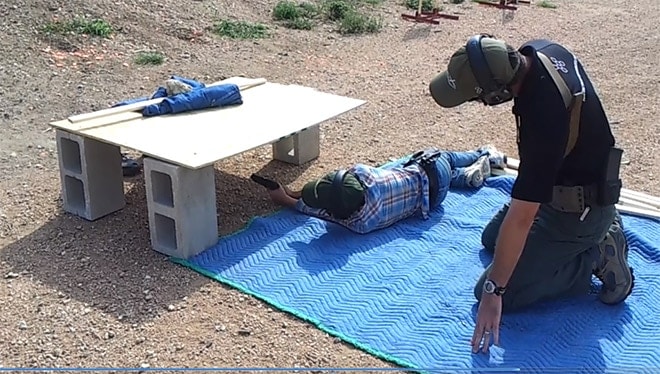 Surely you can imagine a situation where this position would be handy. Contrived or not, as long as you practice, you’ll be proficient. (Photo: Andy C)

I’ve discussed previously that dry fire is important, but also super boring. There’s techniques you can use to make it less mind-numbing and my finding is that keeping things practical as possible goes a long way in facilitating regular practice.

But what should you practice? This depends on your goals — if you want to become a very good competitive pistol shooter, your general practice regimen will be different from somebody trying to improve at benchrest rifle shooting. For this article, I’m going to highlight some general positions and scenarios that most pistol shooters (and many rifle shooters) can benefit from, which I refer to as “variances” — changes from your typical standing square to a target. They’re commonly encountered in the “real world” of defensive shootings and in the fantasy land of competitive shooting, so people who train with these small variances in mind have an edge.

We all practice reloading after emptying our ammunition, but how often do practice getting ammo into it in the first place? In this variance, place your firearm on an object (or inside one to simulate keeping it in a safe or case) with ammunition carriers nearby, and practice picking up the gun, loading it, and getting off your first shot. 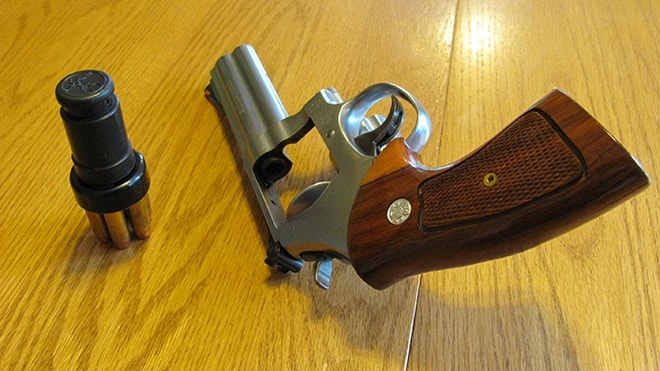 I had to experiment quite a bit to figure out this is how I like to put a revolver on the table to load it as quickly as possible. (Photo: Andy C)

In shooting games, a starting condition with an unloaded firearm is common, and makes a surprising difference in some people’s performance. While many have an excellent reload because they’ve developed the muscle memory, fewer have trained to grab that same carrier from a different position and load it into a gun they don’t immediately have in hand.

In reality, depending on your local laws or in-home conditions, having a loaded and ready firearm close by may not be an option — it may need to be stored empty, but with ammunition nearby. If you intend to use it in the gravest of circumstances, you should be competent at loading it.

While being seated is easy, shooting from sitting may not be. There’s a lot of variables — is there a table or steering wheel in front of you? Is a target directly in front of you or beside you? Can you even draw your firearm comfortably and safely when you’re sitting? Sitting and shooting isn’t necessarily a cakewalk — some people do markedly worse shooting the same string or stage sitting as opposed to standing. 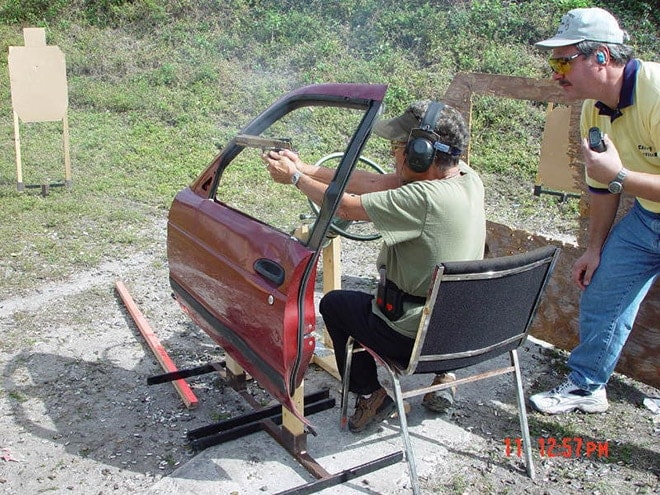 A fantastic demonstration of simulated shooting from a car, without the whole car!. (Photo: Andy C)

How much of your day do you spend sitting? Given the quantity of time we spend on our asses, shooting from sitting should be an essential skill we’ve all developed, but a surprising number of people take it for granted as easy.

Shooting stages with a sitting start or spent sitting entirely are common as well, so if you don’t know how to clear your holster safely from sitting, you might be surprised with a DQ by sweeping yourself.

Practice this variance all kinds of ways; with a target in front of you, offset to the left and right, even behind you. Do it with an object blocking you from the front, like a table, or in a confined space like a car (you can simulate this by sitting in a corner).

Can you use your pistol well one-handed? One of the biggest benefits of handguns is their ability to be operated single-handed, but not many people practice because it’s difficult and discouraging. But knowing you can put fast hits on a target with only one hand is a huge milestone in pistol shooting. How about your defensive long gun in the house? That’s a skill rarely practiced that might come in handy!

The obvious answer is also a practical one: sometimes, you need to hold a flashlight, or open a door. Other times, you need to ferry your small child out of harm’s way, but still need to hold onto your defensive tool. And, of course, there’s the bleak prospect of being wounded — or, similarly but less painful, maybe you can’t use one arm because of a recent operation or medical condition.

Any way it happens, competent one-handed handgun operation is a good skill to have, and knowing you can use a defensive long-gun one handed won’t hurt either. This is one of the most important real-world variances to practice. For competition pistol shooters, if you’re not training one-handed, you’re probably not too worried about scores anyway.

Variance 4: Modified Prone/Lying on Side

Our instincts and the evidence agree that getting low to the ground is a great way to avoid being shot. But we live in a society permeated with barriers that have a gap along their bottom: cars, benches, counters, and so on. All provide concealment and cover to a person who understands how to shoot from a modified prone position. 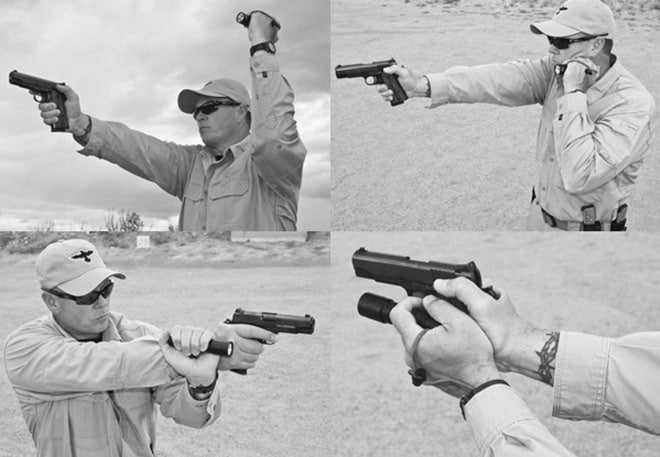 Depending on who you ask, these are all perfectly valid uses of a flashlight with a handgun, but you can only find out what you like by actually practicing them. (Photo: Andy C)

This is another skill that is mostly useful for people concerned with real-life scenarios that involve defensive shooting. Learning to shoot lying on your side minimizes your profile, gives you stability, and can give you a huge advantage over a threat who’s not expecting it. But shooting in this position is unusual and it takes effort to maximize the advantages.

For competitive shooters, sometimes the stage designers are jerks and like to make you lay down in mud. Not much you can do here but get them back by beating their scores.

Next time you’re dry firing and your mind wanders to anything else, consider switching up your practice by introducing one of these variances. It’ll bring your attention back to the task at hand (at least for a while), and while you’re at it, hopefully develop some real and valuable skill.