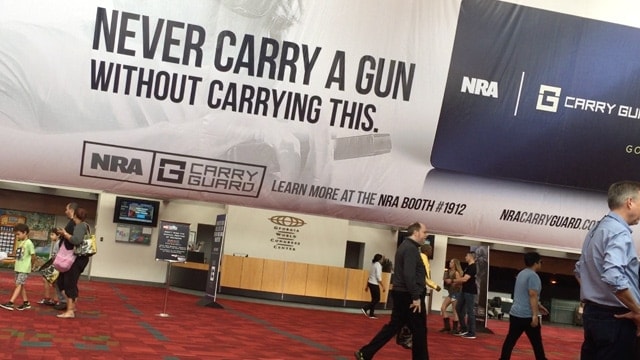 The NRA greeted guests with a sign promoting its new self-defense insurance during the organization’s annual conference in Atlanta from April 27-30, 2017. (Photo: Daniel Terrill/Guns.com)

As a concealed carry instructor, I receive my share of offers to benefit financially from enrolling students in various self-defense insurance policies. These policies generally involve various levels of coverage for criminal and civil legal representation, and sometimes protection from personal financial sequelae resulting from legal trouble.

Usually sold in a monthly fee structure from $10 to $50 per month depending on promised coverage, advertising for these policies bears all the hallmarks of any successful subscription product. True stories from would-be crime victims are presented in convincing fashion, flanked by industry experts—attorneys—who reassure potential customers that their legal incompetence will surely undo their social and financial future should they be forced to draw and/or use a gun in self-defense.

As an armed citizen and instructor, I’ve observed with interest both the marketing of these programs and comments from subscribers, some of whom are close friends and family. Data to back my conclusions isn’t available anywhere; these are anecdotal observations and an attempt to perform consumer education.

What marketing of these programs doesn’t deliver, nor does the nightly news for that matter, is information on how very slim the chances are that they’ll need this coverage. Imagine if the nightly news reported on the many crimes are prevented or curtailed before loss of life or property thanks to the presence of a gun.  One listserv I’m on reports many per day—and those are the ones that drew the attention of the press. Perhaps thousands of other encounters that are intended as crimes, but are ultimately peaceful, occur every day and are never documented.

Another trend I’ve noticed in the stories that make it onto my radar is the surprising frequency with which an intended victim manages to disarm a criminal and ends the encounter, peacefully or otherwise, with a newly possessed firearm.

Incidents that end well are far more common than dreadful ones.  Yet there’s no denying that the unfortunate few who end up in oppressive and/or expensive legal entanglements for legitimate acts of protecting oneself or others can suffer multiple, devastating effects.

The handful of those around me who subscribe to self-defense programs and have shared their thoughts seem to be deriving one primary benefit, as I perceive it:  peace of mind.  Their subscription, and more importantly, the leaky-faucet-like drip of literature and videos that come their way on a regular basis, remind them of the ugly circumstances they’re paying to be protected from.  For them, the confidence that they won’t be jailed for long, if at all, and won’t lose important assets over a defensive gun use is worth the cost. Thus far, none of them have had the opportunity to use the plan, so I’ve had no ability to hear if they had a choice of legal representative or felt that their legal defense was satisfactory.

At this year’s annual meetings, the NRA silently divorced itself from the apparently still-functioning Second Call Defense program it was once associated with, and announced its own combination of self-defense insurance and training for subscribers.  NRA-certified instructors received the usual email promising a share of the pie for subscriptions sold as a result of our own promotions.

NRA, and another insurance program, use the word “Association” in their names. Since many charitable organization names include that word, subscribers are lent a sense of supporting a good cause. And while education and lobbying may be causes they support, there should be no doubt that these are profit-driven enterprises, designed to compete for their subscription money.  There’s nothing wrong or illegal about that, but it’s probably a good idea not to ponder too long on whether it preys on naïve consumers.

Another observation I’ve made of program subscribers is biased, coming from a local instructor, but nevertheless true.  Subscribing to the programs that provide training in the form of articles and videos, especially those that offer such training at an additional premium, tend to turn away from actual training. Now, there’s plenty of educational research that says watching videos can result in acting out behaviors seen on the screen. Whether such learning can translate to tasks as multifaceted as responding to a violent criminal attack remains to be seen.  Common sense would indicate that the value of such passive education pales in comparison to actual practice. Experience with committed YouTubers on the range, who inevitably discover that performing defensive pistol skills isn’t the inborn trait they thought it was, bolsters my belief that passive training is inferior.

Biased? Sure it is.  Maybe the five bucks per month I’d make on each subscriber is the easiest form of passive income I’ve ever said no to. It’s my take that agencies selling these policies hurt local instructors-turned-salespeople by grooming a sense of self-satisfaction in owners who see no need for live fire instruction or practice—after all, they’ve watched their monthly video, and why even waste energy thinking about honing judgment about use of force because, hey, they already have a lawyer just waiting to jump into action on their behalf?

In an ideal world, consumers could subscribe to both peace-of-mind-lending insurance, and get both passive and live practice. Few people are that well-funded or have that much time. Fortunately, my passively trained friends and loved ones will likely never have to use their self-defense insurance. If they do, though, expect a follow-up report about any application of their video training as well as their satisfaction with the legal protection they’re paying for.