Training: The value of competition shooting to your type of shooting

And sometimes you get some glamour shots with your fellow competitors. (Photo: Andy C)

You’re shooting your favorite gun at your local range. It’s a fantastic day and you found some boxes of ammunition in the couch pillows last night so it’s like this is all free. But it all feels… hollow. It’s not boring — not yet — but it’s not as much fun as it was in bygone days.

If you’ve been shooting for a long time, you’ve likely experienced this feeling. At this point, I see a lot of gun owners start shopping for a new firearm to give the hobby a shot in the arm. This gun will end up just like the others in time, though, and you’re back to square one. How do you break this cycle?

To get it out of the way, let’s start by addressing common complaints or downsides of competitive shooting: 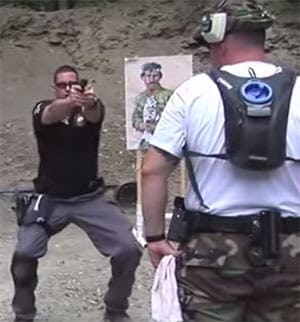 While competitive shooting may get you killed on “the street”, some training looks likely to kill you on the range. (Photo: Everydaynodaysoff)

This is the most common and valid case against organized shooting. Unfortunately there might not be a range with facilities and range officers putting on sanctioned matches nearby. If there are, it may be a discipline that doesn’t interest you, or that your equipment is incompatible with.

This is also the hardest one to answer. All I can say is be flexible and talk to your local shooting community. I’ve found local matches I didn’t know of until I put the word out I was looking to try different things. If you’re ambitious, gauge interest with others and consider starting something yourself. You might be surprised by how little work it is to get certified as a safety officer and start hosting local matches.

This is the second-most-common argument I hear about competitive shooting and among the least valid. Can getting into Cowboy Action Shooting be pricey between your costume, ammunition, cart and guns, gunsmithing and paying a mascot? Of course. But that’s cherry picking the high end. At the low end, we have Rimfire Bullseye. Do you own a rimfire handgun or rifle? Can you afford bulk ammunition? If so, you can compete.

There’s a spectrum of investment with shooting, like any sport. My wife shoots IDPA with a hoodie, a holster she made and a police surplus S&W Model 10. She shoots next to a guy who spent thousands on his Sig X-Six, a custom Kydex holster, a 5.11 vest, and a camera on his head. There are certainly shooting games that let you use what you have, and if you like it, you can slowly invest in specialized gear.

Speaking of investing, I often find that the people who lament the expense of competitive shooting own dozens of different guns. Instead of buying another rifle that gets shot twice a year, why not invest that money in competitive shooting fees, ammunition and equipment?

I don’t see this argument too often, and only seems to come from people who wear load-bearing vests in YouTube videos. I guess you might develop a “training scar” from habits like moving around an IPSC course without taking cover, but then, I might also forget to wear pants to the grocery store because I never wear them inside if I can avoid it. For most people, developing any habit with their guns that lets them shoot better is an improvement over the habit of shooting slowly on a square range — or leaving their gun in a drawer.

On with the show 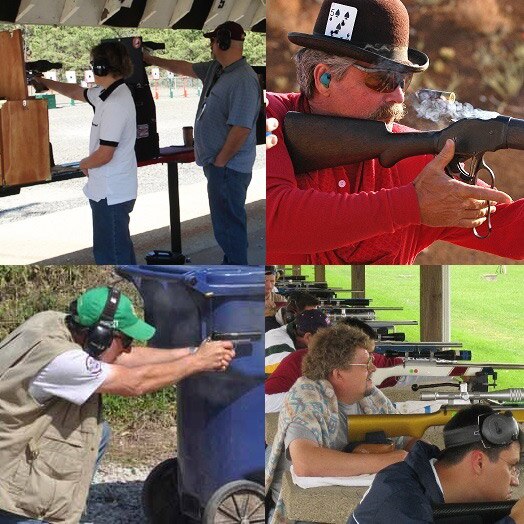 For every type of shooter, there’s some kind of discipline to try. (Image: Andy C)

So, with the negative nancies hopefully placated by a firewall of disclaimers, let’s get on to why you should look into organized shooting.

“Competitive shooting” is a big umbrella with a range of activities under it. You have stuff like Bullseye ranging to Five-Stand and 3-gun. The specifics of what competitive practices you pursue in are dependent on your interests and equipment, but I recommend trying any of them out, and here’s why.

For the casual firearm owner

Maybe you bought a gun a few years back, have a box of ammo, and keep it in the nightstand. You go to the rental range every two months and buy your ammunition at their attached store, shoot a few silhouette targets and go home. Competitive shooting might sound too hardcore for this type of person, but they’re the ones who likely benefit most from it.

The main reason is it provides a reason to go and shoot. There’s a date on the calendar that says “use your gun.” This is a pretty strong motivator to get said gun out of the nightstand. It also provides meaningful feedback with scores and rankings. Whether you try to beat personal records or develop a competitive edge, once values are assigned to the quality of your shooting, it’s a natural to try and improve those scores. That has a good chance of leading to more frequent range time and may even lead to that most secretive of arts, dry fire practice.

For the non-competitive shooter

You might be worried that this paragraph is going to tear a hole in the space-time continuum. But hear me out. A lot of people also aren’t crazy like me and start competitively tying their shoes if they see somebody else doing it nearby. But the term “competition” might not be the right term for these shooting sports for everyone. For a lot of people, it’s more important that it’s “organized” than “competitive.”

Organized shooting gives you solid metrics and goals you can set to measure progress. In any activity, it’s hard to stay motivated and know you’re improving without a solid set of parameters to measure progress. The framework of games like Five Stand and Steel Challenge provide anybody unconcerned with beating other people an easy way to watch their own improvement and set concrete goals to strive for.

For the self-defense enthusiast 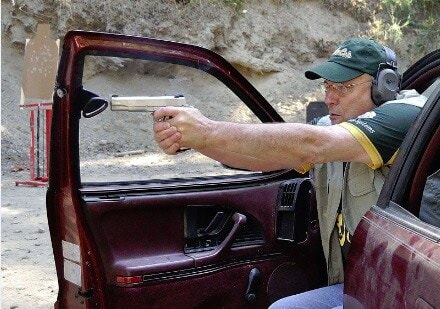 It’s not the real thing, but it’s fairly close — and without the court dates. (Photo: IDPA/ArmedDefense)

Are you being crushed by the weight of responsibility to be ready for the fight that never ends? Going broke signing up for every “class” on defensive shooting you can worm yourself into where oddly there’s no shot timers, no grades, and everyone seems to pass? If so, consider redirecting some of that class money into shooting IDPA or “Tactical” multigun matches.

No competitive shooting rule set can really replicate self-defense accurately. But the important thing for somebody preparing to use a gun defensively isn’t to try and simulate the scenario of shooting perfectly–it’s to get better and safer at shooting a gun. Competitive shooting will give you an environment that fosters developing that skill set in fun, challenging and diverse set of conditions.

Competing doesn’t replace traditional training. But it can serve as a good way to practice the technical aspects of firearm usage, get accustomed to shooting under stress, and also serve as a fun palette cleanser. When you’re tired of having “THREAT” screamed in your ear and diving under a prop car, running around shooting cardboard can remind you shooting is fun.

There’s plenty of guys who own more camo coats than guns and shoot four to six rounds a year — three to sight in, the rest directly into delicious animals. A hunter who does well each year filling the freezer might not see the benefits of competitive shooting, but they’re there.

One of the important ones is that there are many shooting sports that emphasize accuracy at range. While it’s not always ethical to shoot an animal from long ranges, it becomes more viable when you’re confident you can place a humane shot from farther away and that requires practice. Long-range rifle shooting like Black Powder Cartridge Silhouette or Steel Silhouette can give you that practice and the motivation to stick with it. As your scores climb hitting the targets, so does your ability to hit an animal from farther away.

For bird hunters, I don’t think the value of clay shooting sports is a secret. But getting into or starting a local league at your trap field makes the activity fun and measurable. 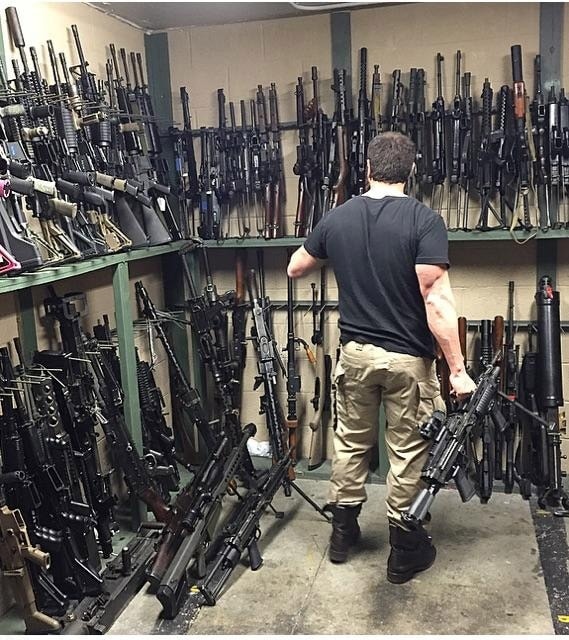 Like any hobby, shooting can get boring. People drift into and out over the years for various reasons. Before I started IPSC, I was selling some of my guns and considering not renewing my range membership.

Getting the social element of organized shooting keeps people in the fold. It also provides variety to typical range shooting from stalls. But there’s also another type of variety — disciplines. When I started to get a tired of pistols, I moved into Service Rifle. After a few years of shooting at Figure 12s with an AR, I see black powder Cowboy Action on the horizon as a way to keep things fresh.

Until you look at the varied world of competition shooting, you’re walling off a huge range of fun shooting activities that can help you develop skills you want. You’re depriving yourself of opportunities to have a lot of fun with the expensive guns you own, improve your skills, and most importantly meet like minded people.