Tricks and tips to building a defense shotgun on a budget 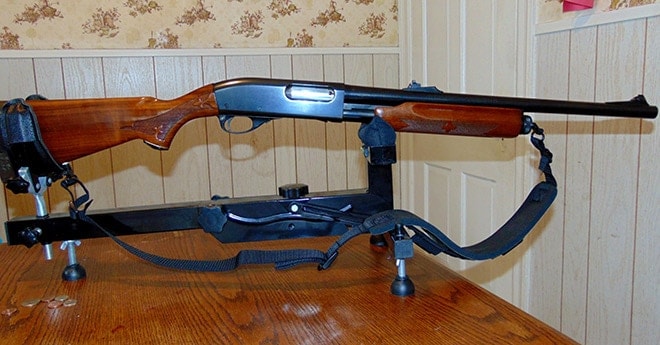 I found a Remington 870 Wingmaster 12 gauge with a long field barrel for a steal. All I had to do was find a shorter barrel and viola – a budget defense shotgun. (Photo: David LaPell)

With most of us watching our pennies, buying a long gun for personal defense is not as cheap and easy as it once was. Recently I decided to try to find a true budget shotgun for personal defense but my tight budget had me doing mostly window shopping. That is until I took a different route and brought home a great deal, one that can be repeated by anyone if they try hard enough.

Beforehand, I decided it would have to be a 12 gauge pump shotgun — but since my budget was so tight that even a new Mossberg 500 was out of the question, which to choose from?  I had to find another way. I went into a local gun shop and spotted a used Remington 870 Wingmaster 12 gauge. While in excellent shape, it came equipped with a thirty-inch full choke barrel, hardly something you would want in a personal defense gun. Still it was a Remington 870 and I knew the parts for these are like Legos — you can mix and match like nothing else. I was able to get the gun for a whopping $260 which included tax out the door. Not a bad start.

The first thing I did was to price new barrels versus cutting the existing barrel down to 20 inches or less. I really didn’t want to mess up a nice vent rib barrel, especially since the one on the gun was like new, but I personally had no use for it, so I decided to try my luck and put it up for sale on Ebay. To my surprise I got far more than I expected. I had checked around a couple of online retailers that buy and sell used shotgun barrels and had been offered $75, but after the auction ended, the barrel sold for $125!

With some new money in hand, I went shopping again. I could have gotten one of the new Made in China barrels for about $70 or so and pocketed the rest but I instead decided on a rifle sight, 20 inch smoothbore barrel in case I ever did decide to take this gun deer hunting. The cost? Exactly what I sold the long barrel for, $125. So to replace the barrel I had broken even.

Any good defensive shotgun needs a sling, but again since this gun could be used for hunting I went the traditional path and added a standard sling for the wooden buttstock and a magazine cap. The cost there was $15 total. I had been up to $275 in and once I purchased a sling I shot up to a whopping $290.

Now with the gun together in its basic defensive form, I decided to give it a few improvements. I had seen a few of the high visibility magazine followers out there, but I decided that I really didn’t want to spend $10 on one. It’s not that I am that cheap, I just found another way — I took the factory black plastic follower that came with the gun and painted it bright orange using lettering enamel. This is the type of paint that they pinstripe cars and motorcycles with so it is pretty durable. You can also use model paint or something else that stands out. Even though it was only $10 saved in the long run, that money allowed me to pick up a couple of boxes of Federal 00 buckshot.

Many of you might be wondering, why didn’t I add a magazine extension, a synthetic stock, flashlight mount, or a bayonet lug? Sure, I could have added any or all of those things, but as I mentioned I am on a pretty tight budget and, to me, there is nothing wrong with the wooden stock the gun came with, especially since it is such quality. As far as a magazine extension, I am torn on this and I might throw one at some point. Since the Wilson Combat version is right around $50 for the two shot extension, that would put my grand total up to $350 altogether. But as of right now I am keeping this gun as is and enjoying it immensely.

So I learned that you don’t have to break the bank to get the defensive shotgun you always wanted, you just need to put in a little work and creativity into making it specifically for defense. And that’s not to say the deal I got is even the cheapest. I went to another gun store recently and spotted a whole line of used pump action shotguns with a couple of them under $200. One was a nice looking Mossberg 500 that if you were to buy a short barrel for would still keep you under the $300 mark, probably much less if you sold the long field barrel already on it.

You don’t need to smash open your piggy bank and rob Peter to pay Paul to buy the defensive shotgun you were always looking for, or need to complement your existing defense guns. There are plenty of good used shotguns out there like Mossberg and Remington just to name a few with plenty of aftermarket parts that are also easy to come by.  Keep in mind that buying and selling the barrels can allow you to recoup some of the initial cost you put into it and make your dream shotty a reality. Just because you don’t see that Mossberg Persuader on the shelf or the 870 Tactical, doesn’t mean with a little ingenuity and time you can’t build your very own from the used donor Field Grade 500 or secondhand Wingmaster on the rack.