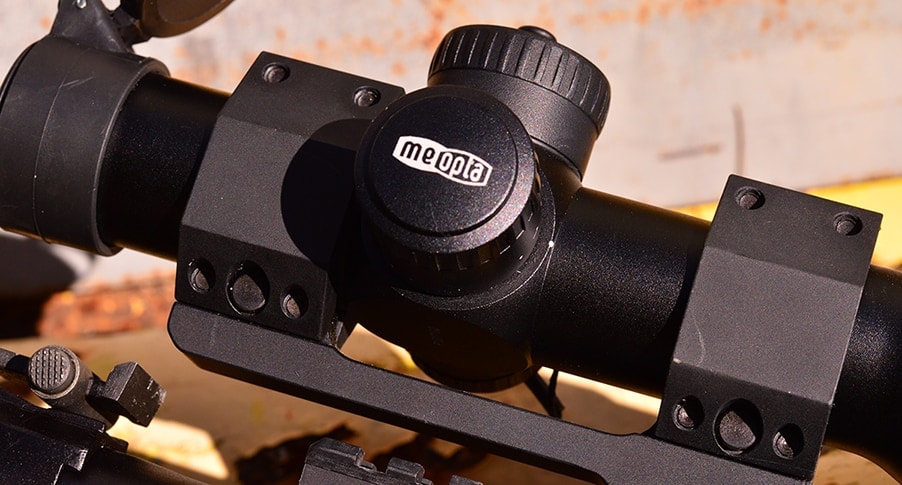 Not as well known as Leupold but every bit as good. (Photo by: Jim Grant)

Leupold, Zeiss, Swarovski, Nikon: everyone knows these brands and the quality they represent. Optics are expensive and hugely important to the hunter, so why would said hunter spend close to a thousand dollars on a brand of optic they have never heard of?

When SIG first came out, some people commented, “What’s a SIG, I’m not wasting my money on some import gun.” A decade later, these same people were helping SIG make money hand over fist once word of their quality hit the streets. Along the same lines is a relatively unknown Czechoslovakian optics company called Meopta.

When a coworker of mine suggested I review their products my response was: “Who?” Our resident hunting expert is Kristin, not me. Every scope I own, with the exception of a single Leupold, is a military optic. Not as a result of my day-job as a mall-ninja, but because I like my equipment to be “Jim-Proof”.  I have dropped two guns in my entire life (one wasn’t my fault, my belt loops ripped and the holster twisted and ejected my Glock), but I have dropped every single scope I own.

I was able to get my hands on three of Meopta’s scopes: the tactical ZD 1-4×22 RD, the Meostar R1 in 3-12×56 and 1.5-6×42 varieties. In order to make a more thorough review, I selected scopes with and without red-dots and with first and second focal plane cross-hairs.

What the Focal Plane?

I’m certain a few of you just gave me blank stares after that last statement, let me explain. Every scope you’ve probably used featured a second focal plane reticle. This means that as magnification increases the size of the crosshairs remains the same. This is ideal for reticles lacking a bullet drop compensator as the BDC will only work at the magnification the rifle is zeroed at. Whereas first focal plane reticles grow as magnification increases, so your BDC applies no matter how zoomed in your are. The BDC’s holdover marks, known as reticle subtensions, are ideal for shooters who engage multiple targets at various distances.

OK, which do I need?

Now that you know what both are, the matter of what you should use depends on application. Most traditional hunters will find a second focal plane is perfect. Since most hunters engage targets within 100 yards, where most hunting rounds experience little to no drop, the BDC just makes the reticle needlessly busy. If you’re out in the desert dispatching insurgents at 100 to 500 yards, the first focal plane allows you to utilize the BDC, even when fully zoomed in, to determine proper holdover.

When the trio of Czech optics arrived at my door, I was excited and then dismayed. There was nothing wrong with the scopes, I just didn’t have the 30mm scope rings necessary to mount them. After a great deal of research, I determined the best mount for the money was the Vortex QD auto-lock.

I test a lot of guns and frequently move scopes from one rifle to the next. The quick-detach mounts save me a great deal of time while being rock-solid.

Meostar scopes are an excellent value (Photo by Jim Grant)

I tested the second focal plane Meostar R1 1.5-6×42 on a new Winchester Model 70 featherweight in .30-06 to see how it held a zero. I fired 300 rounds of Greek HXP surplus ammo through the Model 70 without incident. The clarity of the Meopta Meostar R1 scope is astounding, not simply because of the enormous 30mm tube, but also because the lens coating is top notch. I quickly engaged targets in most lighting conditions. Using a foot tall scaled-down, man-shaped swinging steel target at 175 yards, the R1 series made hits laughably easy even at dusk.

For the more tactical first focal plane Meostar R1 3-12×56 scope, I mounted it on my favorite battle rifle, the second model VEPR in 7.62x54r. I was sure the combination of the hard-hitting 54r round and the violent AK action was going to bring the Meostar to its knees. Only it didn’t. I fired 440 rounds of Bulgarian silver-tip 54r ammo in slow and rapid fire strings, believing the rapid firing would cause the scope to move. Nevertheless, both the Meostar scope and the Vortex mount held steady.

The ZD on my favorite AK (Photo by Jim Grant)

I outfitted the tactical ZD 1-4×22 RD on two of my favorite carbines: a 20-inch Bravo Company Machine AR15 in 5.56x45mm and a milled Arsenal SAM7SF in 7.62x39mm. While most tactical guys will limit the use of high-end scopes to AR platform weapons, I wanted to test the ZD on a wider variety of platforms. On both the AR and AK, the ZD scope is a tremendous boon to accuracy. Even with the magnification dialed all the way down, the ZD’s built-in red dot makes rapid target engagement a matter of shooter skill, not eyesight.

I rarely hunt, so while I can objectively appreciate both of the Meostar scopes, the ZD tactical scope is my favorite of the lot. If I were an NRA high-power shooter or hunter, the ZD wouldn’t be my first choice. For three-gun matches and plinking multiple targets, the ZD 1-4x22RD is a solid choice on par with offerings from Zeiss and Nikon.