Pump-action shotguns are the go-to home defense weapon. Simple, reliable and powerful, the 12-gauge shotgun sets the standard for single-shot, man-stopping capability. Thrifty shooters can often find good deals on used scatter-guns at either pawn shops or gun stores. But shooters looking for a new Mossberg 500 or Remington 870 will be surprised at how expensive they both get.

Thankfully, there are smaller companies importing quality shotguns at base-model prices with many bells and whistles included, like the TriStar Arms Cobra Tactical Marine.

The Cobra Tactical Marine shotgun is a magazine tube-fed, 12-gauge pump-action shotgun. It holds five plus one rounds in its tubular magazine located underneath its 18.5 inch barrel.

The relatively short barrel makes the Cobra more maneuverable and thus better-suited to home defense and indoor use. While the magazine is less capacious than some would prefer for a home-defense weapon, six rounds of double aught buckshot makes short work of any attacker on two or four legs. TriStar would probably like to increase this capacity, but since the Cobra is manufactured in Turkey, it’s subject to 922r import restrictions. 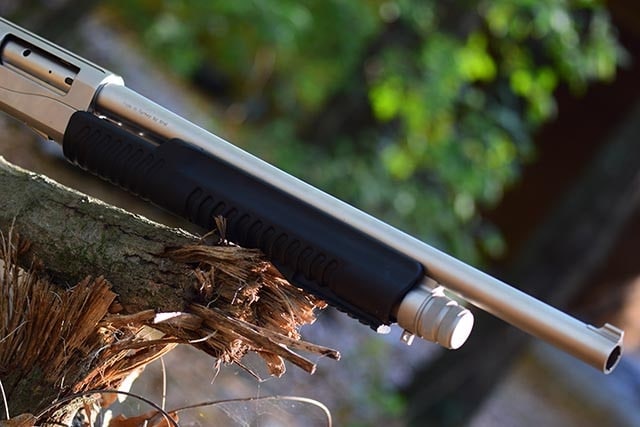 The Cobra gets the “marine” portion of its title from the brushed nickel finish that adorns everything metallic on the weapon. This not only looks great, but also better resists corrosion caused by humidity. Other weather-resilient features include the synthetic furniture and chrome-lined chamber and barrel.

The buttstock is black plastic with a rubber recoil pad to help shooters deal with the notorious knock of its hard-hitting 12-gauge shells. The fore-end is constructed of the same polymer and includes gill-like grip cutouts. This strange pattern isn’t what sets the Cobra apart from other designs, but rather what lies beneath it.

Under the fore-end is a coil spring wrapped around the magazine tube that’s designed to aid shooters in closing the action and locking the breach prior to firing. While conceptually a great idea, in practice the spring is more of a nuisance than anything else. The increased resistance it adds makes wracking the action needlessly difficult, and could potentially cause a shooter with wet or slippery hands to short-stroke the action by releasing the pump prematurely. Thankfully, the superfluous spring can be removed without affecting the function of the shotgun. 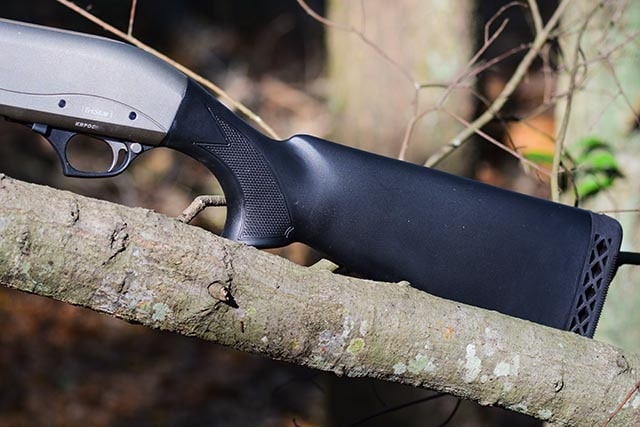 Directly competing with the likes of Mossberg and Remington invariably leads to comparisons. So how does it stack up? In terms of fit and finish, the TriStar Arms shotgun is just as attractive as any offering from either company, but the fit isn’t quite as nice, especially compared to Remington’s cash cow, the 870. Like both shotguns, it loads from underneath and ejects to the right. It features a Remington-style push-button safety and action release lever forward of the trigger guard.

In fact the only downside to purchasing a Cobra over a more prolific shotgun is aftermarket support. Yes, the Cobra includes a dovetail mount for installing optics and standard swivel mounts for slings. However, shooters looking to customize their shotgun with pistol-grip stocks or integrated flashlight forearms must have a gunsmith fit parts to their TriStar shotgun if they don’t exist. 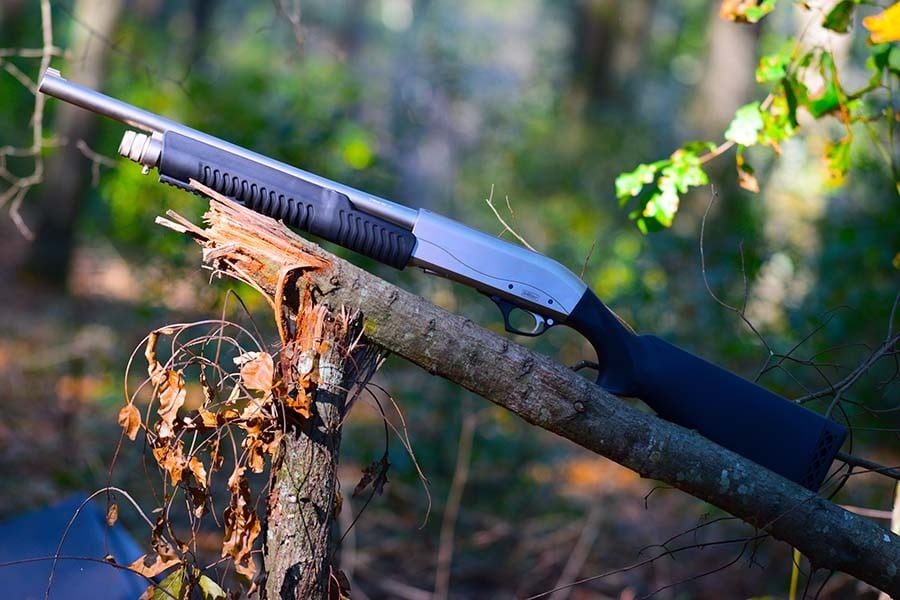 While the nickel-plated finish might be too flashy for most shooters, it’s clean and resists corrosion. (Photo: Jim Grant)

The Cobra’s accuracy is limited by its short barrel, but is still more than acceptable for both home defense and combat use. Despite its abbreviated barrel, it’s threaded for Beretta-style chokes to help shooters squeeze every last drop of range from it. Though using anything other than cylinder on a home defense shotgun is only advisable if shooters live in a mansion with 25 yard long hallways. The other limiting factor is the nickel-plated front sight post. It is reflective, smooth and doesn’t contrast with the barrel, making it difficult to rapidly acquire in most lighting conditions. 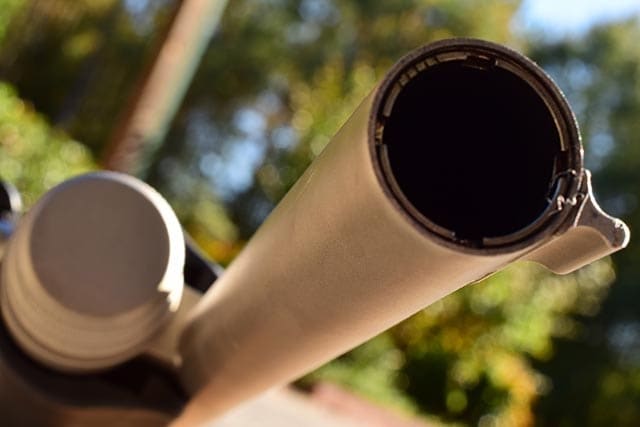 Despite being a home defense weapon, the Cobra ‘s barrel is threaded for Beretta-style chokes. (Photo: Jim Grant)

Reliability from the Cobra is great after running a box of your desired ammo through it. At the end, no failures whatsoever after 250 rounds of various ammunition including slugs and buckshot.

The only area where the TriStar Cobra suffers is ergonomics. The spring-assisted pump is awkward and difficult for smaller shooters to effectively manipulate. As stated previously, the spring can be removed to convert the Cobra Marine Tactical to a traditional-style pump action shotgun by removing the magazine cap and extracting the spring.

With an MSRP of $369, the TriStar Arms Cobra Tactical Marine offers shooters a more cost effective solution to all-weather home defense. It is every bit as functional as pump guns twice its price and includes several features not present on more expensive guns, making it a solid first shotgun choice. Shooters looking to extensively customize their home defense shotgun might want to look elsewhere, but the Cobra makes a good turn-key defense weapon.