Not only a staple of American Thanksgiving cuisine, Turkey is also a country in Europe. One which manufactures phenomenal handguns at old-world prices.

The leading small-arms manufacturer in Turkey is Canik 55, a company that has been making CZ-inspired handguns since 1998, though initially its efforts were concentrated on domestic construction for Turkey.

Tristar of Missouri imports dozens of these Turkish pistols to compliment its already substantial catalog of shotguns. Every pistol currently imported by Tristar is based substantially on the CZ-75 series of handguns, an all-steel semi-automatic handgun from the Czech Republic. 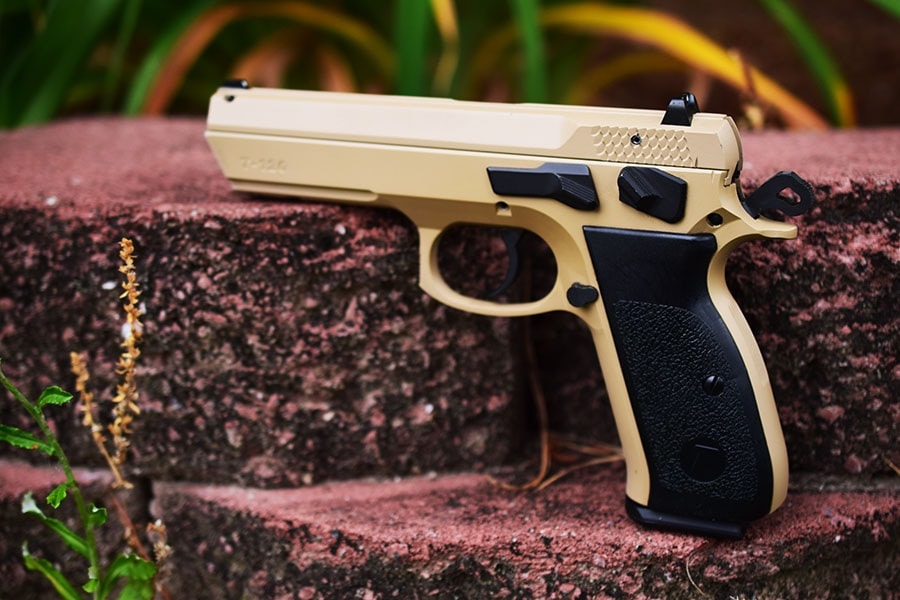 A CZ clone crossed with a Jericho 941? Sign me up. (Photo by Jim Grant)

What is a CZ-75? The letters C and Z in the 75’s moniker are the abbreviations for Ceská Zbrojovka or Czech Armory, betraying its Cold War heritage.

The biggest tell-tale sign that the CZ pistol heavily influenced the production of the T-120 is how the slide rides inside the frame. The accuracy of the SIG P210, the first pistol to employ this configuration, undoubtedly impressed Czech engineers and they decided to integrate it into their design. Ironically, the CZ-75, a derivative design itself, has spawned countless imitations from a myriad of nations, some licensed others not.

The Tristar T-120 is more than just a clone. It includes modern features and Israeli appearance not dissimilar to the Jericho 941. 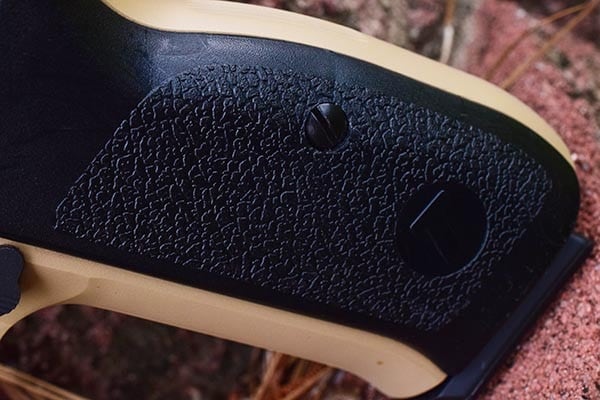 Despite being much less expensive, there’s nothing cheap about the T-120. (Photo by Jim Grant)

Shooters familiar with the CZ-75 series of pistols will find the Tristar T-120 very familiar as its layout and firing lock are identical. The only external differences between the T-120 and a genuine CZ-75 is the rear slide serrations, Cerakote finish and a railed dust cover that allows the mounting of lasers and flashlights. The pistol featured in this review came in a matte tan Cerakote with contrasting polymer grip panels, trigger controls and hammer.

The Tristar T-120’s controls are all Czech, meaning, they function like a Hi Power pistol or a cross between a Beretta 92 and a 1911.

The Tristar, like the CZ, can be carried hammer back with the safety up, but it lacks any mechanical method of decocking the hammer. Unlike CZ-75 pistols, Tristar handguns can be fired without a magazine inserted, a tremendous advantage during a tactical reload. The pistol’s action is DA/SA and allows for second strike capability, dropping the hammer a second time on a round that failed to detonate. Real CZ pistols tend to have heavy, long double-action triggers and light, short single-action ones.

The T-120 functions similarly, but the bearing surfaces need additional polishing. The double-action trigger pull measured in at 8.2 pounds, while the single-action pull measured a pleasant 4 pounds. If you’re not willing to invest in a professional trigger-job, 500 dry fire pulls of the trigger in double-action will smooth the trigger pull substantially, but be sure your weapon is unloaded and pointed in a safe direction.

Speaking of pulling the trigger, the T-120 was boringly reliable with every type of 9mm ammo I fed it. For the review I utilized five varieties of ammo to check its versatility and reliability. Everything from Federal frangible ammo, Hornady Z-Max, 9mm NATO spec +P and SIG’s new 9mm defensive ammo ran without incident. The Tristar seemed to prefer 124 grain ammo and the increased recoil of the round was unoticable thanks to the substantial weight of the all-steel frame and slide. 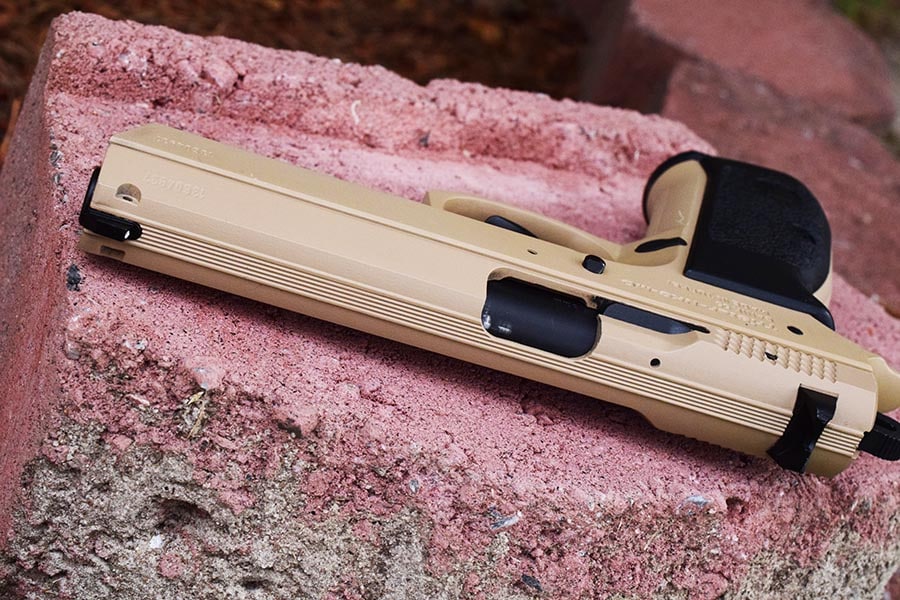 The most notable feature of the CZ-75 and, thus of all its clones, is the slide-inside-frame design that locks up tighter than the traditional slide over frame method. This is due to the tighter fit achieved by having the slide ride between the frame, minimizing horizontal movement. The downside is the lack of exposed slide gives the shooter about half as much gripping area to rack the slide, making clearing a malfunction more difficult. Canik 55 addressed this by fish-scale serrating the slide, a more aggressive alternative to the standard linear serrations found on most handguns. On the bright side, the extra low slide is the lowered bore height that minimizes felt recoil by giving the barrel less mechanical advantage over the shooter’s wrist.

Overall, recoil is easily manageable, due to the Tristar’s construction. The ergonomics are similar to that of a Browning Hi Power or slightly thicker 1911 and allow most shooters to comfortably grip and fire the weapon. Shooting steel plates at normal handgun combat distances of 10 to 15 yards was enjoyable and effortless. The partridge style post and notch sights are usable, but would be perfect if they were just a little bigger. 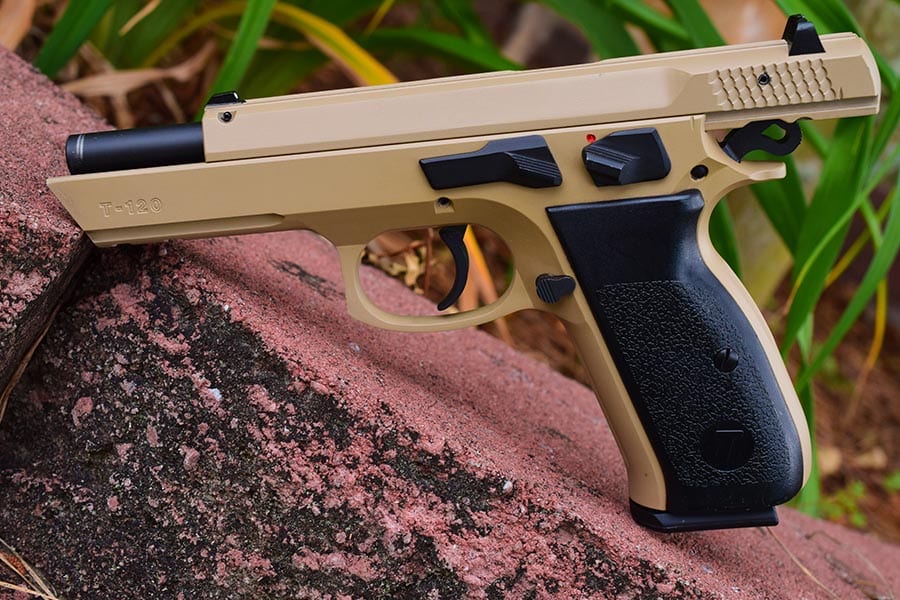 The slide-inside-frame look is initially quite strange, but grows on you. (Photo by Jim Grant)

Also, nearly every part of the Tristar is compatible with genuine CZ aftermarket parts, including magazines. So finding night sights or different grips isn’t a problem. Magazines are even available in pre-ban high-capacity varieties thanks to the original CZ pistols prevalence and 20-year pre-assault weapon ban existence. Shooters in ban states will no doubt pay a premium for these magazines, but their existence is a nice addition to the T-120’s aftermarket selection.

The Tristar T-120 Cerakote might not be as attractive as the old-world blued finish of genuine CZ-75 handguns and this is reflected in the price. The T-120 retails for $469 compared to the CZ-75B’s $680. The Tristar is a dependable choice for a bedside pistol especially for recoil-sensitive shooters and those on a limited budget. Users who have limited upper body strength or arthritis may wish to avoid CZ designs in general, given the limited gripping surface area on the slide.

The Tristar is roughly $200 cheaper than the real deal, functions identically and allows the shooter to mount lights or lasers. If you’re the kind of person who had to buy name-brand, the Tristar might not be the best gun for you. If you simply want a rugged, dependable pistol and can’t spend a month’s rent to afford one, the Tristar T-120 won’t disappoint.