One of the most important things that I have seen overlooked by turkey hunters is the choke and the pattern their shotguns throw.  That’s like going to a rifle competition with gun that hasn’t been zeroed.  You could get lucky and have it be dead on, but you’re probably more likely to hit the target next to yours. Ok, that is a bit of an extreme analogy, but it still doesn’t make sense to take a gun out hunting and not have an idea how the gun will perform or the pattern it will throw at different distances.

The preferred choke for turkey hunting is an extra full choke because they tend to be tighter than the full chokes that come with most shotguns. An extra full choke ensures that a full fist of lead heads downrange and packs an effective punch.

However, there are almost as many turkey chokes on the market as there are turkey calls.  Trying out all of them would probably cost you as much as buying a new Benelli.  Are there differences in the different tubes? You bet. However, if you buy one good quality choke and take the time to pattern it with different ammo you will most assuredly end up with a good tight pattern.

Like I said, there is a plethora of choke tubes out there to choose from.  Some are more budget minded, while others are rather pricy.  But they all should do the same thing: throw a tight pattern. Here are three good choices.

2. Comp-n-Choke – Comp-n-Choke makes a wide variety of chokes, actually that’s about all they make.  The ports they use are slotted while most others are round. This is to slow the shot cup down as it passes the ports to get your pattern set faster.  They refer to this as the “slot-ported breaking system”.  Comp-n-Chokes are available for a wide range of shotguns and with different constrictions to fit your needs.  They sell for around $50.

3. Gobblin’ Thunder from Kicks Industries – The Gobblin’ Thunder has been around for a while and is touted as being the first extended-ported choke tube.  The MSRP is around $70, but these have preformed well over the years and will continue to do so.  They are also available for most current manufactured shotguns. You can also pick from different restriction sizes.

Once you have an extra full choke for your shotgun you need to see what it is throwing.  It’s time to shoot and take a look at the pattern. Patterning a shotgun is simply seeing what the shot pattern looks like at a set range. 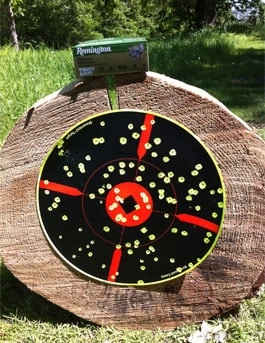 For turkey guns I like to pattern at 40 yards with a 12-inch target.  The ideal pattern will have at least 100 pellets in the target with a good spread that doesn’t have any turkey head sized holes in it.  It’s simple, you can use store bought targets or draw a 12-inch circle on some butcher paper, put an inch center dot for point of aim, measure out 40 yards and go to town.  Try a few different loads to find a pattern that looks good.  Remember that different barrels will pattern different, even on the same gun.

There is no secret formula to find the perfect pattern and you don’t have to spend a ton of money to get a good and tight pattern from a turkey gun. With a good full turkey choke and some time with different ammunition you will find a match to get the bird.  Assuming you can call him in and he doesn’t see you that is.