Ultimate Gobbler Challenge: Taking a turkey with every gauge

After logging hundreds of hours afield chasing longbeards with 12-gauges, I sought an even greater sporting challenge: taking a turkey with every common gauge shotgun.  No experiment is worth wounding an animal; therefore, paramount remains a fair chase and clean kill.

With adequate fore-planning — and sometimes a good hunting buddy — a new challenge in the field can turn an average day of hunting into an unforgettable memory.  Besides, this ultimate gobbler challenge is a great way to break out some safe-dwelling scatterguns that seldom see the light of day.

Harvesting a turkey with all the gauges is perfectly fair and effective if the hunter can master a few relatively simple, albeit time-consuming, things: patterning, load selection, and effective range.  Too many times, I’ve heard burly men claim the only way to cleanly kill a turkey is with (insert either “10 gauge” or “12 gauge 3-1/2 inch” here). While there is great truth to the stopping power of those two big bangers, lesser gauges and smaller shells can be equally deadly.  Depending on gauge, various loads, choke tubes, and shot sizes must be tested at the patterning board from different distances.  When adequate factory loads were not readily available, I tinkered at the loading bench.  Most of my hunting spots were chosen ahead of time, usually from a pop up blind.

Given range limitations due to gauge, I carefully measured and marked  distances from the blind with a series of sticks to make sure the bird was within lethal shot pattern range.  Also, ensure that all gauges are legal for turkey and game bird hunting in your state. 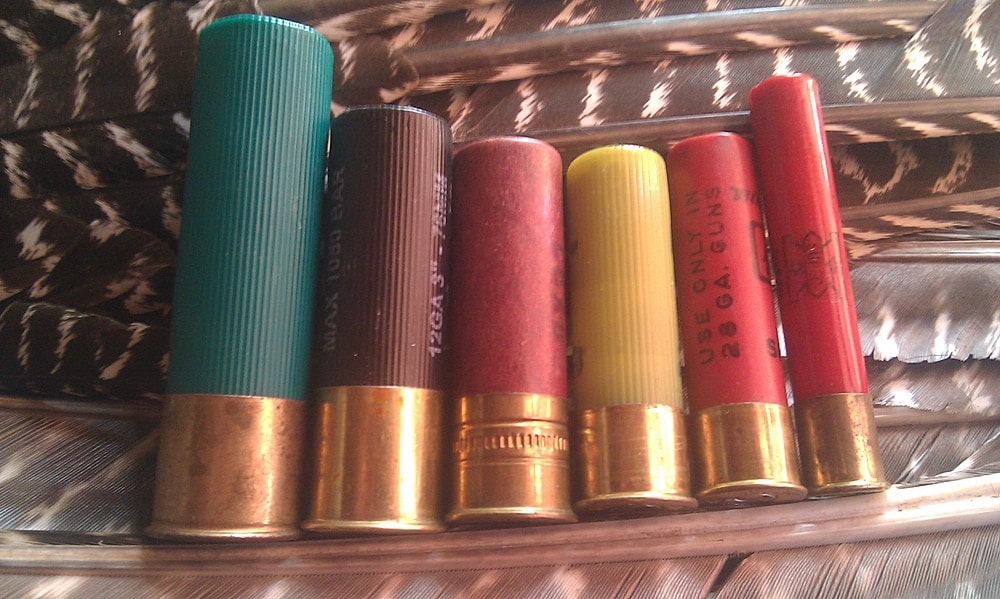 The firearms options here are boundless.  As it was for me over a decade ago, I am sure the majority of turkey hunters bagged their first bird with a 12 gauge.  There are more loads than you can shake a stick — er, box call — at. With the new extra-super-duper full turkey chokes, ranges can really be stretched out, though I’m a believer in patience, scouting, decoying, and working to pull birds in to the 40 yard range.  Heck, some of the most thrilling hunts I’ve been on have involved close-working birds — gobbling, spitting and drumming so nearby that the hunter’s hair stands on end.  I have taken numerous gobblers over the years with my 3-inch chamber Remington 11-87 and loads of various factory flavors.  Today’s 3.5-inch loads can arguably challenge the pattern of the oft-forgotten 10 bores.

While the mighty 12 may be the first choice for most hunters, the 20 is booming in popularity with the rise of youth and learn-to-hunt programs.  With perhaps a tad more attention to range and accuracy, the 20 is perfectly deadly on big toms — even with the savings of a little recoil. 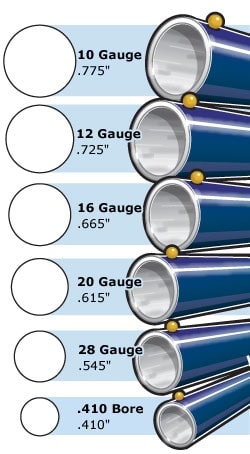 For this hunt, I shouldered a beautiful Beretta 391 Urika 3-inch chamber semi-auto.  Given the 20s turkey popularity, standard gobbler loads were readily available and patterned nicely with a turkey-full choke at around 30 yards.  I went with handloads just for the joy of reloading, though a box of Golden Pheasants I tried out patterned nearly as well, and the range can certainly be extended safely in most cases.

For this test, I borrowed a Remington SP10 semi-auto. Admittedly, it was my least favorite of the group, mostly due to the gun’s weight and the fact that I am not too familiar with 10-gauge loads.  I’ve seen this gun skybust many a goose, so I knew marking out ranges for this beast was not as critical.  The turkey on this rainy-cold hunt worked to within about 35 yards and didn’t stand a chance, though both the gun and pattern were capable of reaching much, much farther.

I was thrilled to take my 16 gauge Browning A5 out to the field.  This gun is a family Browning Sweet 16, which had been shot and loved by both my great-grandfather and grandfather.  It has its battle wounds that left a great patina, yet unfortunately, I just don’t take it out of the safe often enough.  But boy, did it make a great turkey gun. Unlike the previous 10-, 12- and 20-gauge arms with their screw-in chokes, I had to compensate for a fixed modified choke.  While I reloaded a selection, factory loads performed just as well at the board, and my comfortable range off hand came to around 35 yards.  While turkey hunting with a bow is my greatest gobbler adrenaline rush, this was one nostalgic hunt I’ll never forget.  Besides, 16s are just plain underrated guns.

Of all the gauges, naturally I was most tentative of turkey time with a .410 bore.  However, I was also most pleased to carry the hand-me-down New England Arms Pardner into the field once again.  It was the first “real” gun with that I’d ever shot anything (a squirrel) and was a hand-me-down gift from my Papa for my eighth birthday.  Despite its light surface rust and a few nicks in the stock, I loved it then and love it still.

The downside to using the Pardner for a turkey hunt was its single shot limit.  The fixed full choke was adequate, though lots of patterning was required, as changing tubes was not an option.  I loaded shells with varying amounts of powder and shot sizes.  The 4’s and 6’s  I would have preferred to shoot wouldn’t pattern worth a darn.  However, 7’s grouped marvelously.  While the pattern was solid out to 30 yards, I felt best inside 25.

Just to make sure I wouldn’t wound a bird, I had a licensed hunting buddy backing me up — with what else than the big 10 gauge.  After several days and passing on numerous trophy birds that were outside range, I had my choice of three nice toms that worked right into the decoys, inside 15 yards.  It was the perfect scenario and when the little .410 snapped out its shot, the turkey went down stone dead.  As excited as I was, my Papa was even more so.  He never thought that little gun would harvest a turkey.

The 28 Gauge: The elusive one 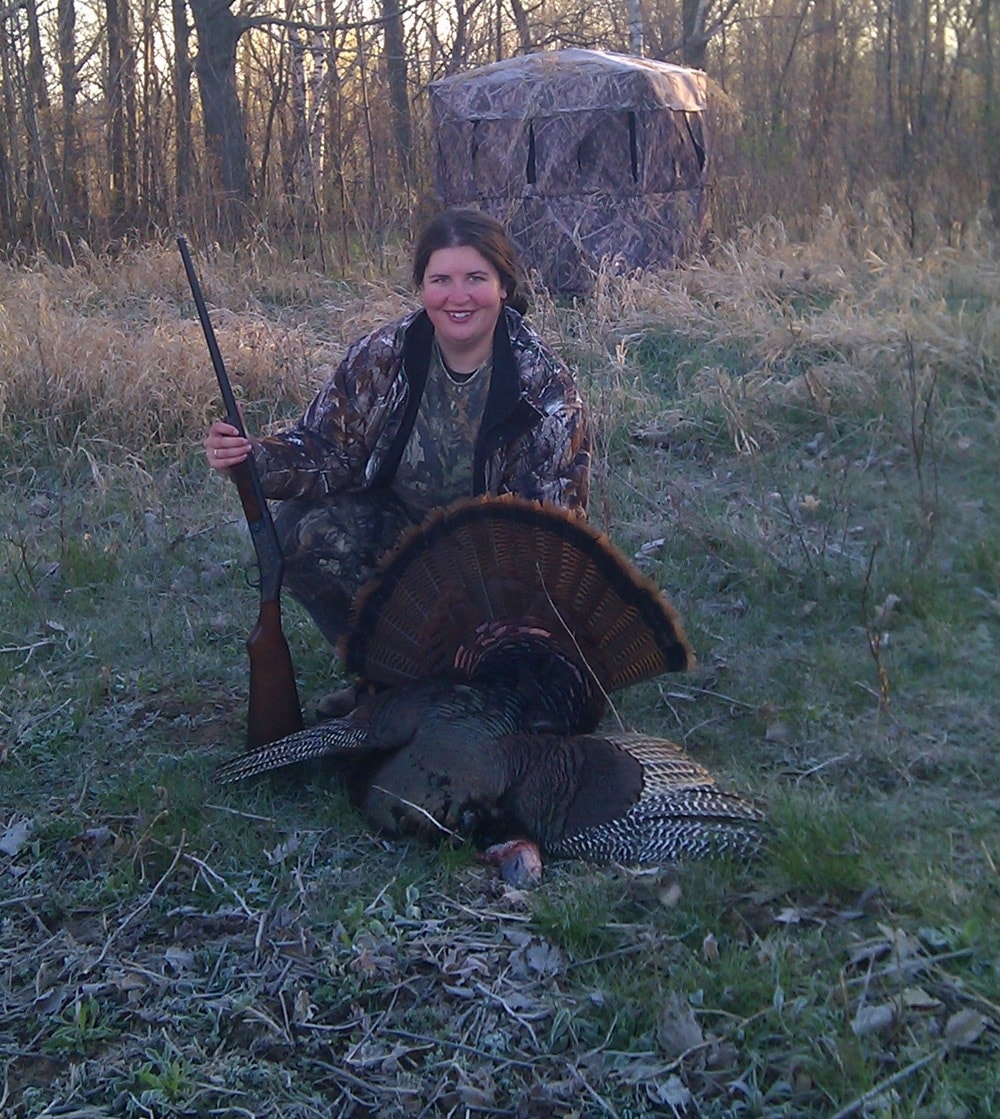 The author with her A5 shotgun and trophy.

All that remains is the 28 gauge.  A few months ago, I received my spring turkey permit for a week in May.  When I camo up and take to the newly-woken woods, I will be carrying a 28-inch barreled CZ Redhead 28-gauge O/U.  Until then, I will be working up loads at the bench, patterning, changing chokes and finding my optimum range.  So when that beautiful tom comes strutting in to my lonely hen call, he will meet his end at an uncommon gun.

What remains when this multi-gauge challenge is complete?  There are always new ways to do the same old things in the field, and sometimes old guns make the best hunting partners.  This spring, I wish you the thrill of morning gobblers sounding off from the roost, a good hunting buddy, and the satisfaction of a successful hunt.  Whatever challenge and joy you face in your hunting endeavors this coming season, spend the time to do it safely, humanely, and most importantly, make some great memories in the field.