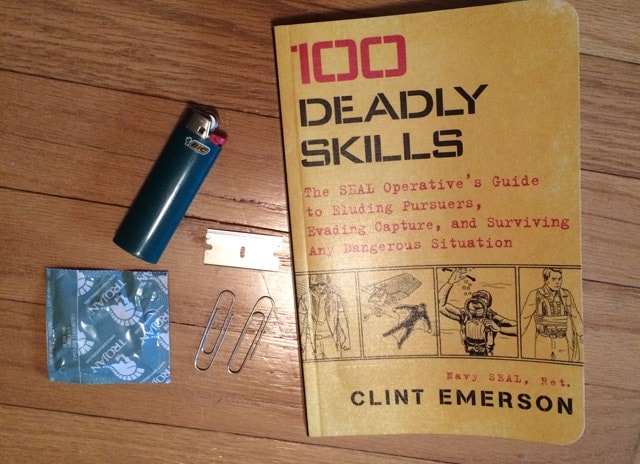 With this manual and some common household items, you too could survive anything. (Photo: Kevin Kane)

Using his two decades of experience as a Navy SEAL and an operative inside the National Security Agency, Clint Emerson has put together a detailed guide on how to survive in a multitude of dangerous situations.

Put together in large categories like Mission Prep, Infiltration, and Sanitization, Emerson groups the skills used by what he calls the Violent Nomad — essentially a highly-trained spy with a “disregard for international borders and their bias for swift, brutal action.”

While the book could obviously be used to help someone on a special ops mission (Steal a Plane), enter a foreign country (Cross Enemy Borders by Air), locate a target (Mobile Surveillance), steal information (Pick a Lock) (Turn a Speaker into a Microphone) or carry out an assassination (Win a Knife Fight) and escape (Escape a Multistory Building), a normal civilian also has a tremendous amount to learn from the guide. Each skill in the book includes an explanation of how and why along with an illustration to help understand, and a Bottom Line Up Front — or BLUF — so that a civilian can easily learn the lesson of preparedness and response from each particular skill.

The written explanation is direct and understated to the point of tongue-in-cheek humor at times. For instance, in the self-defense skill Deploy a Roll of Coins, the BLUF states, “Coins can be used for tolls, meters, public transportation, and to crush a face.”

For anyone that has watched the the more recent James Bond or Mission Impossible films, it’s hard not to think about the differences between the real-life operatives and situations that Emerson provides guides for and the Hollywood version. Instead of high-tech gadgets, the Violent Nomad must use improvisation with whatever is handy — more Jason Bourne than James Bond.

Though the guide can inspire a certain sense of paranoia toward unseen, lurking attackers running surveillance in order to kidnap someone, in general Emerson is careful to explain that most of the skills will hopefully never be necessary for any normal person, but that he wants instead to provide the knowledge to empower everyday folks should the need arise — to turn victims into survivors.

He writes that the “true purpose of this book is not to make you more dangerous, but to make you significantly safer.” Having read through this book amid the stories populating news media today, many of the lessons do feel unfortunately necessary.

“100 Deadly Skills: The SEAL Operative’s Guide to Eluding Pursuers, Evading Capture, and Surviving Any Dangerous Situation” is available wherever books are sold. It retails for $18, or $11.99 as an e-book. For more information, check out the book’s website.