US Firearms Lightning: A faithful, yet, improved reproduction

Previously I reviewed the Uberti Lightning in .357 Magnum, which is a nice gun, and you could say the pump-action carbine broadened my horizons a bit. The U.S. Fire Arms Manufacturing Company, Inc., on the other hand, had another take on the Lightning and it wasn’t so much a nice gun as it was an amazing gun.

USFA is well known for making the nicest (and priciest) “Old West Guns and Cowboy Action Shooting Rifles”. Their reproductions are very well made and they offer a variety of custom detailing and upgrades that allow customers to get just the kind of gun they want. Well, so long as it is a gun they make. Unfortunately, they are no longer offering their version of the old Colt Lightning, originally manufactured in 1884.

Nonetheless, these guns are available used at least, and they are highly prized – for very good reason, too.

The one I shot was chambered in .45 Colt and a few years old. It also had just enough rounds put through it to be broken. It featured a heavy, 20-inch octagonal barrel (making it the ‘carbine’ version). Gorgeously blued and with USFA’s characteristic lovely engraving. And the owner had opted for a beautiful blond maple stock with checkering on the grip and slide grip. And everything about the fit and finish was perfect.

Where the Uberti was a solid, faithful reproduction, the USFA Lightning seemed to be something more. In essence, USFA improved the Lightning in areas where it needed improvement.

For instance, like the Uberti, it also had a new hammer safety of the transfer-bar variety, which eliminates the ability to fire the gun just by pumping a new round into the chamber while the trigger was pulled back.

But USFA also seemed to have improved the design flaw of the Lightning. With the original design and the Uberti it was easy to get a cartridge wedged under the carrier while feeding a round into the chamber. It often happened if you weren’t careful pushing the slide grip fully forward and back. That was the case, at least, when we shot the Uberti and in turn we had to be conscious of it. With the USFA, that wasn’t a problem at all, and we didn’t take any particular care in loading or using the gun. 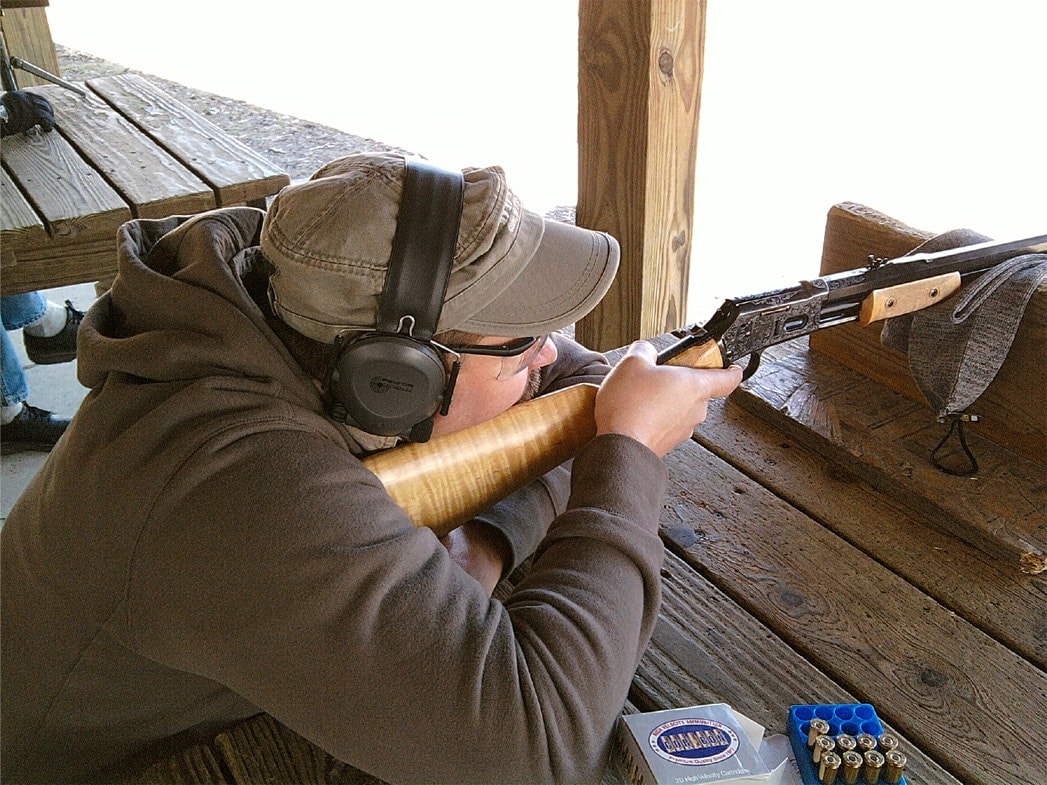 Shooting the USFA Lightning was much like shooting the other version: it is faster and easier to stay on target than using a lever gun. But it was even nicer. The trigger was better. The pump operation slick and more ‘definite.’ Accuracy out to 50 yards was fine (about 4-inch groups) using the iron sights (that’s the limit my eyes can handle without a scope) and a bench rest, and at 25 yards it was easy to put 10 rapid shots into about a 3-inch group from a standing position.

Recoil was more noticeable than with the Uberti, but that was shooting 158 grain .357 magnum loads. This time we were shooting Federal 225 grain LSWC target loads and CorBon 225 grain +P loads. Even with the hotter, heavier loads the recoil was quite manageable. The gun does have a curved metal buttplate, so the recoil-sensitive shooter could easily add something there to cushion recoil if necessary. The gun is very well made, and I wouldn’t have any qualms about shooting the hottest loads through it.

There aren’t a lot of these guns out there for sale. I think that is because they are very highly valued by those who own them. If you do find one for sale, don’t expect it to be less than about $1,200 well used – ‘NIB’ models will probably be more on the order of $1,500 on up, depending on how much custom work or materials went into it.