It’s what we called “The Franken-gun.” At first, I thought that this was just some cobbled-together oddball that one of my friends had picked up somewhere – a refugee from some amateur gunsmith’s bench. But it turns out it was a fairly accurate reproduction of another fabled WWII gun, which itself had been cobbled together for a very specific purpose.

The original was the De Lisle Commando Carbine, a bolt-action, short-barrel carbine designed to be as quiet as possible. See, it also had a substantial suppressor built into the long ‘can’ on the gun. It was purportedly so quiet that the loudest sound it made was the firing pin striking the primer – quiet enough that it couldn’t be heard at all at 50 yards, the effective operating range of the gun.

The original had been a wartime project meant for British commandos, made using parts from a Thompson SMG (the barrel), a short-action Lee-Enfield Mark III (the receiver/action) and modified magazines from an M1911. I’m not sure where the stock came from on the original. It proved successful, but only about 130 of the guns were made.

And a decade or so ago a small company out of Washington state called Valkyrie Arms decided to offer a reproduction of the De Lisle, using similar components cobbled together the same way. Actually, they offered two versions. The first is a supposedly accurate reproduction with a short barrel and full suppressor (and therefore required the appropriate paperwork and tax stamps). And the other was only a mock-up with a conventional 16-inch barrel and no suppressor. The latter is the one my friend owned, and which I had a chance to shoot.

The gun is— rough. I mean, it really does feel like it’s something that has been ‘Bubbafied’. It’s made of parts that only kinda-sorta fit together – no one is going to take pride in how it looks. The stock has been abused and the joint between the rear and the receiver area has a steel band hiding the joint. The same goes from the receiver to the fore-stock. The magazine well is sheet metal, and not well-formed. The ‘can’ covering the barrel (meant to represent the suppressor) is something out of a high-school shop class.

But the functioning parts work reasonably well. The bolt operated decently, though there were some minor ejection problems (this seems to be historically accurate). The trigger was stiff, but not horrid. The sights were OK – I think they are also from an Enfield. 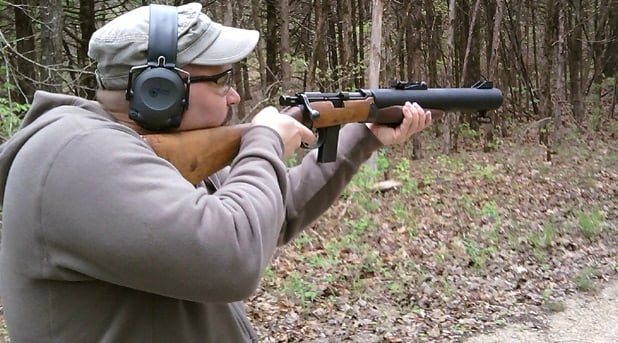 Shooting the gun wasn’t bad at all, and the accuracy from this model was decent. It was easy to make tin cans jump and six-inch steel spin at 25 yards. The gun is supposed to be much better than was typical of the original De Lisle or the suppressed reproduction version, either of which were evidently only accurate to about a ‘minute of human torso’ at 50 yards.

Recoil was minimal. Shooting a .45 ACP out of a gun with this much mass just doesn’t generate much recoil. Of course, the .45 was selected for the original De Lisle because it is a sub-sonic round in standard loadings. This meant that there was no supersonic ‘crack’ (sonic boom) from the round, which made it much easier to suppress for commando purposes.

While there is still a Valkyrie Arms page up for the De Lisle, it seems that the company isn’t actually functioning at present. And I cannot in good conscience recommend that you track down one of these guns used. But if you happen to stumble across one, take a little time to check it out. Look beyond the cobbled-together character of the gun, and see the history that it represents.