Versacarry: The 'zero bulk' holster has a very clever design

The Versacarry is a lightweight concealed carry holster that the company touts as “the world’s first and only zero bulk holster,” and I think we might have to take their word for it.

The Versacarry isn’t a strap of leather or a shell of plastic. It has a unique design in that instead of wrapping around the gun, the pistol actually sits on the holster. 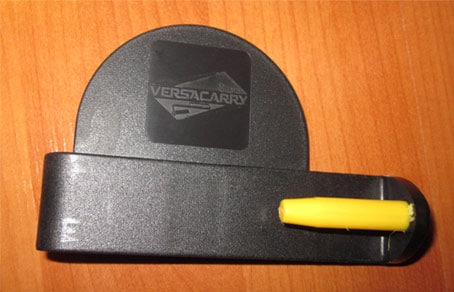 “Within nothing flat you can go from unarmed to armed and ready to go,” a Versacarry spokesman said. The idea behind the Versacarry was to make something easy enough to take off when you don’t need it on you, say while sitting in the car, but also easy enough to put right back on when you do, like running into the 7-11.

It’s actually a very clever design. The barrel of the gun slides onto a retention rod and, once it is fully seated, you then clip the holster onto your belt.

The retention rod is made of a plastic called ‘Delrin,’ which is very durable material made by DuPont, and is held in place by a screw. The major benefit in using that particular type of plastic is that it has a smooth and durable surface in addition to it being cut 15,000s of an inch below the barrel’s diameter, meaning the barrel will fit snugly onto the retention rod. Guns.com was able to perform a test for this introductory review with the new Smith & Wesson Shield, a subcompact 9mm handgun. 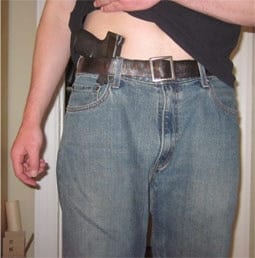 Another appealing aspect about the Versacarry is its diversity. The holsters are sold by caliber and gun size. Each retention rod is sized for a specific round. They sell .32 ACP, .380 ACP, 9mm Luger, .357 SIG, .40 S&W, 10mm Auto, and .45 ACP, and in five different sizes ranging from pocket pistols to full size 1911s. So, for example, you can buy a small 9mm Versacarry and carry a Ruger LC9, Kimber Solo or a Glock 26, just to name a few. Lastly, it’s designed for ambidextrous use as well and it also doesn’t matter if you have accessories attached to it (except for, maybe, bayonets).

The Texas company has been around for more than a year now and in that time the product has evolved. From what the author has seen, the original design was slightly larger before and it lacked the plastic plate, what Versacarry refers to as a “trigger guard,” it is now available with.

Ideally, the trigger guard would prevent the trigger and controls on the gun from snagging on your pants. The more I looked at it, the more I thought it was a rather brilliant feature. I was blown away by the simplicity of it all. 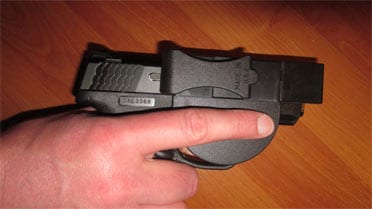 When secured onto my waistband, the gun was comfortable to carry and there was no difficulty drawing the pistol with one hand. It also holds the gun pretty securely in the waistband making it really easy to conceal even while wearing a thin T-shirt.

My only criticism of the line is that they’re not available for revolvers yet, but according to the company’s website they will be shortly.

The Versacarry sells for $25 and they’re available at about a hundred mom and pop stores around the U.S., but they’re also available on Versacarry’s website.