There are numerous ways to carry your guns.  The design options are based on one defining set of questions—how secure do you need the gun to be, and how fast will need to access it?

But there is another obvious question that determines options for concealed carry—how obvious do you want to be?

That’s where Verscarry holsters have a significant advantage.  They don’t look like much, but the offer a confident way to carry a weapon with a very low profile.

The Versacarry, when seen in profile, is kind of like an “S.”  The top of the S is a belt hook that wraps over (and back under) a belt.

The bottom of the S is a post that fits securely into the weapon’s barrel.  This post is snug and just slightly slanted back so that the gun is forced against the holster. 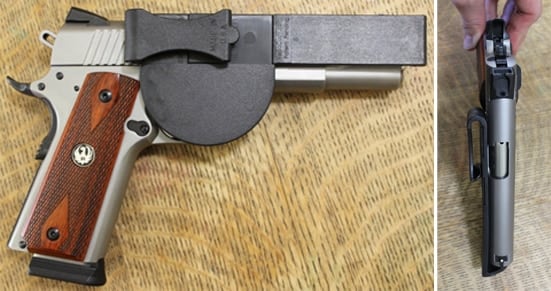 The Versacarry is ambidextrous.  There is a small wing that serves as a trigger guard and it can be moved to either side.

With the holster firmly attached to the weapon, both can be secured in place.  Drop the holster and gun inside the pants slide the belt hook over a belt.  It helps if the belt is as wide and thick as the slot inside the holster—otherwise the draw moves much more of the Versacarry before the gun is drawn.

The Versacarry has a very low profile.  It is a minimalist approach to the holster.  As it adds much less mass (especially width) to the weapon, the weapon is easier to conceal.  That’s it.  And that’s a big deal.

There are no disadvantages

If I were forced to name limitations with the current design, I would point to the holster’s only secure point of contact with the weapon—the barrel retention rod.  Yet this is not really a criticism, as it was designed into the Versacarry—and I have tried to shake it loose and I can’t. 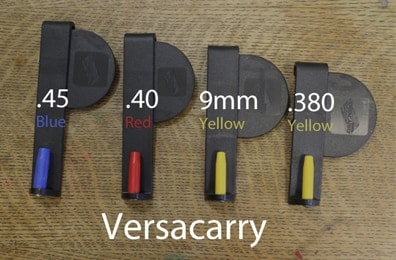 A secondary connection is made where the belt (threaded through the belt clip) holds the frame against your body.  The holsters are meant to keep the grip accessible.  I’d like to see a Versacarry that drops the whole weapon below the belt line, so the only visible element would be the narrow polymer belt clip. However, that could be remedied with a different size Versacarry.

When I first heard of the Versacarry, I thought the idea seemed a little odd.  It isn’t.  The holsters look strange, but they work great.

There is a learning curve with the Versacarry.  For example—if you draw fast, the system works smoothly.

Versacarry has hit on an ingenious design.  It isn’t new, exactly—I know police officers who carried undercover in a similar fashion by bending coat-hangers into S-hooks.  But that was always a last resort option.  The folks at Versacarry have actually refined that idea.  They engineered and tested their products.  And they work.

If you are looking for a low profile option that allows for fast access, try on a Versacarry.