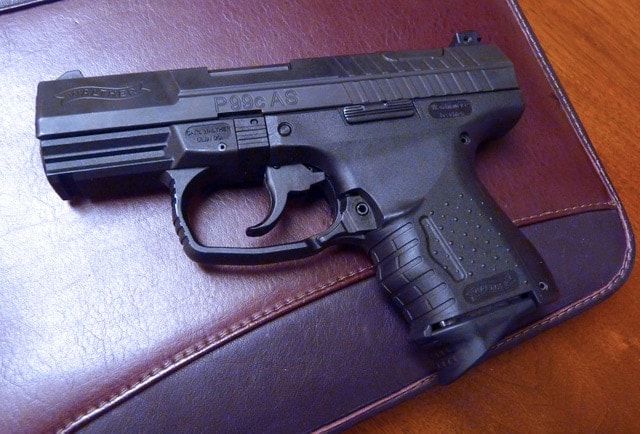 Originally designed for police use, the Walther P99 began production in 1997 in 9mm and .40 S&W calibers.  It was originally designed for service use, as it is a full size handgun holding 16+1 in 9mm and 12+1 in .40 caliber, but what set the Walther apart was Walther’s replication of the feeling and action of a true traditional double action hammer system.  Competing with Glock, Walther wanted to appeal to users of hammer-fired guns such as the Beretta or Walther’s previous pistol, the P88.  A compact version of this P99, called the P99c AS (the c AS standing for compact Anti-Stress), was introduced in 2004.  It has a half-inch shorter barrel at 3.5 inches, and has a 1 inch shorter grip, coming in at 4.3 inches tall, and has a 10-round magazine in 9mm and 8 round magazine in .40 S&W.

Not another polymer striker-fired pistol

We are in the age of the polymer-framed, striker-fired handgun.  So why should you have another?  Yes, the P99 has a lightweight polymer frame.  It uses a linkless, modified Browning type locking mechanism.  It is small (at least the compact is), and has a striker fired mechanism.  So WHY would you want it when you could buy a Springfield Armory XD or a Glock or a Ruger or an Smith & Wesson M&P —  you get my point. 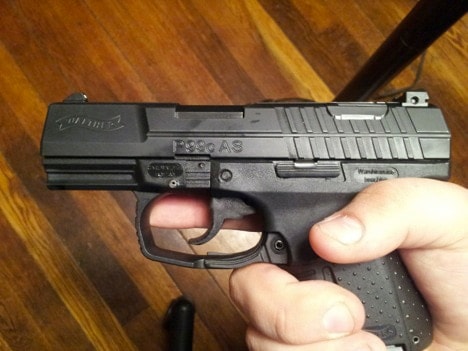 It all comes down to trigger pull and mechanics.  Personally, I own two Springfield Armory XD’s (one is the XD 45 and the other is the XDM 9mm 4.5) and I love them to death.  But their trigger pull, like many other striker handguns, has a little something missing.  I even went as far as to install a Springer Precision trigger into my XDM, and it is an excellent trigger.  But it will never be like the crisp single action trigger of a 1911 or even a Beretta 92.

What sets the P99 trigger apart is it is a true traditional Double-Action/Single-Action mechanism that gives the feel of a DA/SA hammer-fired gun.  How it works:  When the magazine is inserted and the gun cocked, the trigger enters what is known as Anti-Stress mode.  The striker is fully cocked and ready to fire; however the trigger remains forward in the double action position.  Pulling the trigger now can be likened to a two-stage rifle trigger: a little under a half an inch of the trigger pull is slack, and at the end of the pull, the trigger will stop and suddenly experience an increase in pull to about 4.5 pounds.  The trigger break is very crisp with minimal over travel and a short reset of about 0.1 inch.  If fully released, the trigger will stop in its single action position, which has about half the take up of Anti-Stress mode.

On the top of the pistol, to the rear on the left hand side is a button flush with the slide.  When pressed, it safely decocks the striker, putting the pistol in double action mode and sending the trigger to its full length of pull.  The double-action pull is about 8 pounds and a half an inch, after which the gun enters single action mode.  Also, if the pistol is decocked and in double action mode, the user can pull the slide approximately 3/8 of an inch to the rear to cock the gun and put it in Anti-Stress mode. 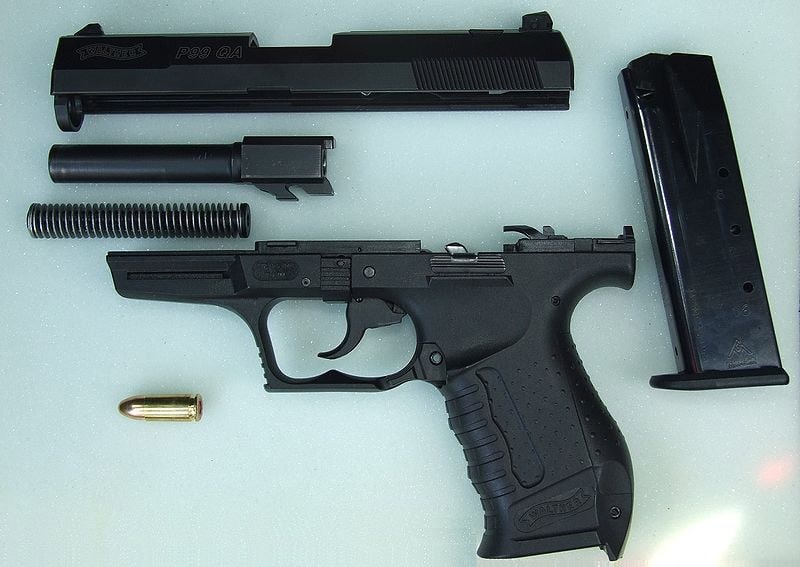 In order to for the user to know what mode the gun is in, a red cocking indicator button protrudes into a recess in the slide.  It can be seen or felt tactilely.

The P99 is also equipped with a standard drop safety, which blocks the path of the striker until the trigger is fully depressed, and a trigger bar safety that prevents unintentional movement of the trigger bar.

Walther also produces two other trigger versions: the QA version has a preset striker that uses a quick action like a Glock trigger, and a DAO version, requiring the striker to be fully cocked by the trigger on each shot.

On the range (and in the holster)

The P99 Compact has some excellent mechanics, from its ingenious trigger to its ambidextrous magazine release integrated into the trigger guard (which, to me, is easier to reach with my trigger finger for a reload that doesn’t require me to shift my grip).  But it also has some excellent ergonomics.  There aren’t many compact handguns that “just fit”.  I have large hands, and the perfectly molded backstrap hugs the web of my hand like a welcome friend.  The finger grooves on the front of the grip seem like they were made for me.  This all adds up to make it a very pleasurable gun to shoot and carry with minimal perceived recoil and muzzle jump.  The grip even fits smaller hands (like my fiance’s).

The sights work well, even if they are a little large.  The rear sight is adjustable for windage with a flathead screwdriver and the front sight is interchangeable to adjust for elevation.  My only complaint about the entire pistol is that there is too much room between the rear sights for the front sight.  I am not sure if this was done on purpose to increase visibility of the target, or an oversight on Walther’s part, but the front sight only takes up little more than half of the room in the rear sight posts.  I am used to shooting the Springfield Armory XDM, which seems to perfectly fill the rear sight with the front post. 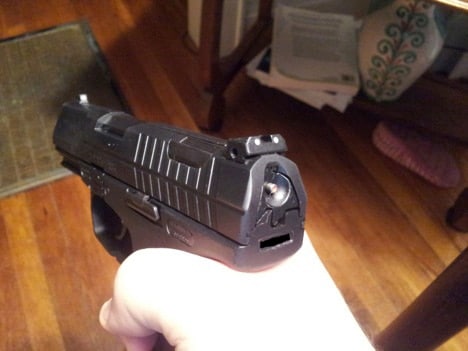 The cocking indicator can be seen protruding from the rear of the slide, and the decocking button can be seen just in front of the rear sight. (Photo credit: Patrick Stump)

It is also worth noting that on the model that is not designed for import into the U.S., the sights are fixed combat sights which I’m sure fit the overall style of the gun better and may even be functionally superior.  That being said, this compact pistol is capable of an inch or so groupings at 30 feet, and easily capable of hitting center mass at 25 yards.

On a man, the P99 Compact carries very easily.  It is very comfortable especially at the four o’clock position in an IWB holster and doesn’t print.  Appendix carry is possible, but slightly uncomfortable.  A shoulder holster would be excellent under a light jacket, or the more adventurous may even try carrying in an ankle holster, but that’s not my cup of tea.

Overall, the Walther P99c AS is an excellent concealed carry handgun.  It is accurate, lightweight, comfortable, with good magazine capacity, and has a familiar trigger mechanism that most other striker-fired handguns lack — features that handgun aficionado crave. MSRP is $660, but can be found for about $100 less.