What We Want to Shoot: De Lisle Commando Carbine, the Silent .45 (VIDEO)

At the peak of World War II, in 1943, the British military began issuing a new weapon to their commandos for their nighttime campaigns.  Developed by an English tinkerer, the carbine they wound up with is possibly still one of the quietest firearms ever made. 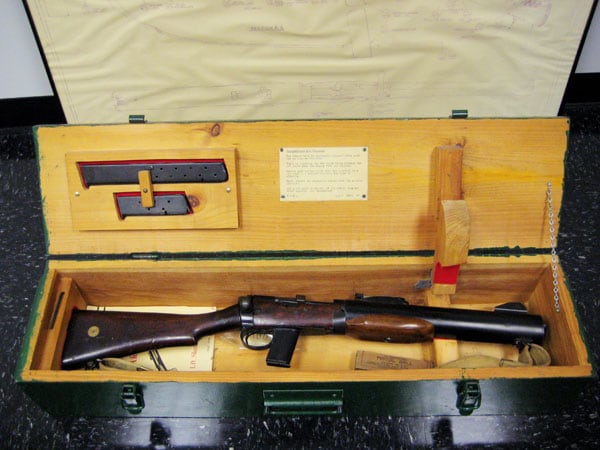 That carbine was the De Lisle Carbine, or De Lisle Commando.  It was a bolt-action Lee-Enfield rifle/Thompson submachine gun/1911 hybrid; his prototype started with a .22 but the inventor, William Godfrey De Lisle, soon moved up to the subsonic big bore .45 ACP for his final product.

The De Lisle used the Lee-Enfield stock and bolt action with a Tommy gun barrel, and fed from modified 1911 mags.  Its ported, 8¼-inch barrel was completely shrouded by a silencer that extended well beyond the end of the barrel, by about a foot.  The overall length of the carbine was just over forty inches, weighing about 8 pounds.

Firing from a completely-closed bolt and being half suppressor, the guns were exceptionally quiet—measured at the time to 85dB—a fraction of the sound pressure of a standard .45, which measures at about 150dB.  At 50 yards, it was not noticeable, and grouped at two inches.  Even the extractor was designed to pour the spent cases out, but only if you held it sideways; this way you could control the sound of the empty brass.

De Lisle and his team of one other dude, Ford Dagenham, were asked to build 500 of them—by hand—but by 1944, stopped at 130.  They are exceptionally rare with only a couple having even come to the U.S.  It is not likely that we’ll have the chance to shoot a De Lisle, no matter how much we want to.

But we can get our hands on a DeLisle.  Manufactured by Valkyrie Arms of Washington State, the DeLisle carbine is an exact replica of the De Lisle, made from the man’s blueprints, using modern tooling.  And seeing how it’s part custom SBR and part high-end silencer, its pricetag, $1,995, is downright agreeable.  (That doesn’t include the two tax stamps you’ll also need.)

The De Lisle was a highly-effective weapon in Germany, and would continue to see duty in battle afterwards, in Burma, Malay, and Korea.  (And some would add Ireland to that list.)  It was, and is, an impressive and infamous carbine.  Even if the replicas aren’t pieces of history, they certainly embody it, and damn it if we don’t want to spend some quality, ah, “range time” with one.