You might be scratching your heads or you might know right off the bat what an M-41A is.  It’s the pulse rifle from the movie Aliens.  But we don’t want no movie gun.  We want to shoot the real thing.  Not a replica, not an Airsoft gun, a real M-41A pulse rifle that shoots bullets.

Turns out, there are at least two real M-41As.

The originals made for the film on sight alone tip off the inspiration for their design in a couple of subtle ways, and after you stare at it long enough, it’ll hit you: it’s a Tommy gun with an under-barrel 870.  And an LED round counter. 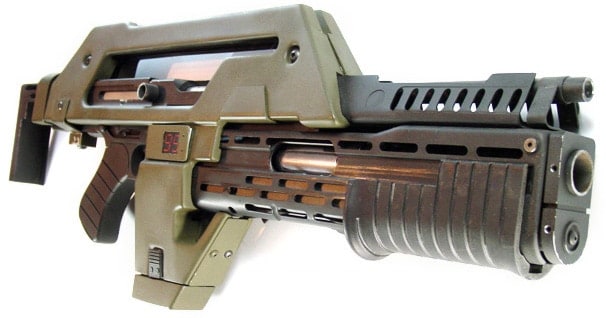 It’s true, they used real, functioning firearms for the movies.  They were converted to fire those bright-as-hell blanks used to put on light shows, but they started life out as honest, non-futuristic firearms.  Recently, Arizona firm LAGE Manufacturing put together one to see how hard it could possibly be.

Turns out, they’re pretty hard to make.  We’re going to get this out of the way so your hopes don’t get nuked from orbit.  “[The] MAX-41A will not be going into production. Due to the personal time and effort it would require to produce them, even in small quantities, it would not be a good investment of resources. We have other new products to design, manufacture and sell and this project would just delay them.” 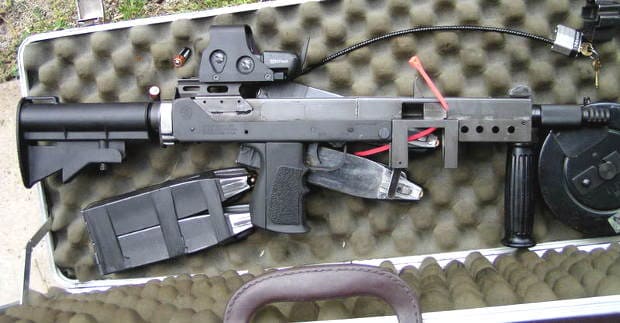 The first real M-41A is a little different from the film props, in that it used a Suomi submachine gun with a squared upper receiver, but it came closer to the specs of the imaginary firearm with a 50-round quad-stack 9mm magazine, which powers on and resets the totally-functional round counter.  Simultaneously with the insertion of a magazine, the gun powers up its red dot sight.  The 870, despite looking different, remains 2+1, as it’s your standard Remington 870 under the shroud.  The whole thing weighs 18 pounds.

It’s not the only functioning M-41A, however.  There is at least one other model made true to the film’s props (also by LAGE) using a Thompson submachine gun out somewhere in the wild:

One day we might really get to handle a real M-41A, until then, maybe we’ll take up Airsoft with one of these.