What We Want to Shoot: Multi-Magazine Shotguns

A short while ago we brought up the impressive and inexpensive Baikal MP-153 automatic shotgun.  Yes it is nice and yes it is durable, reliable, and cheap.  But for all that, it’s not the most wieldy gun ever made.  Even taking into consideration the fact that it’s a heavy long arm to begin with, it, like most shotguns, either pump or automatic, the magazine itself presents a problem.

The majority of the magazine hangs out above or in front of your support hand, and when they get long, boy do they get heavy.  There’s a reason double-barreled shotguns have stuck around for so damn long.  It’s not just the weight of the ammunition that affects how the firearms point, it’s the leverage the weight has being out as far as it is.

These are five shotguns that deal with this head-on.  In no particular order, here goes.

The Kel-Tec KSG. Easily one of the more promising and well-known of the bunch, the KSG is still undergoing testing and evaluation, although we’ve heard that the ATF has already received theirs for green-lighting.  It’s also the least likely to get fucked with, governmentally-speaking, since it’s a pump shotgun.

But what a pump shotgun!  It has two 7-round magazine tubes and ambidextrous controls.  It’s very, very short because of its bullpup design, and makes smart use of lots of polymer to keep the weight down.  Because it’s a bullpup, we also expect it to have less perceived recoil than shotguns where the action sits in front of the strong hand.  Although it’s not available quite yet Kel-Tec is hoping to price it around $600, putting in reach for most people.

The twin magazine tubes have a manual selector, which means that it’s possible to load different types of ammunition in it.  Slugs for doors, buck for targets; cops are going to loooove it.  And so, we think, will we.

There’s also the UTAS UTS-15, another “long gun” in the same style of Kel-Tec’s.  Namely, that it features twin magazines; it is not a pump, but rather, an auto that alternately feeds from the magazines.  Not really great for multiple types of ammo, but it still impresses us with its 14+1 capacity and cycling speed. In theory, anyway.

The UTS-15 is a Turkish gun and they’re looking for an exporter; until they get a foothold in the US the only way you’re going to shoot one is to fly out to the Mediterranean.  Getting them stateside would be super-nice of them because we want to load one up and run it hard, even if it’s a hair bigger than the KSG.  The UTS-15’s action is further back than most shotguns, but it’s still right on top of the strong hand.  Only parts of the action ride behind the grip.  We have no idea what they would cost because we don’t know what their funny fruity money’s worth in dollars.

The Initial Point SRM 1200-series of automatic shotguns doesn’t have two magazines, it has four.  Actually, it uses a magazine magazine.  Alright, it’s like this: after emptying one 4-, 3-, or 2-shot magazine, you rotate the forward magazine assembly which locks a second, fresh and full magazine in place.  You can do this four times, but reloading’s super.

The magazine magazine is detachable.  The whole thing pops out and you can rock in another set of tubes for another 16 shots.  This one is available, and if you can afford one, would you like to sponsor the coolest online gun magazine ever?  Writing requires good booze… Anyway, the SRM shotguns, which come with one magazine, cost $2400.  You can get extra magazines for two bills.

Then you got your unconventional shotguns with conventional magazines: the Akdal MKA 1919 and the Saiga 12.  The Akdal is another Turkish shotgun (which is funny, because they don’t have any turkeys in Turkey, ha ha… sorry) and it’s stylized on the AR-platform of rifles.  It looks really easy to use if you’ve ever spent time with an AR, it just happens to kick like a 12-gauge.

Because they have detachable magazines, you can shoot however much you can carry.  That’s, unfortunately, the downside.  Because of 922(r) law, we’re currently limited to 5-shot magazines.  Still, the MKAs aren’t that expensive ($700) and it’s only a matter of time before someone starts making parts to allow for higher-capacity, even drum magazines.

But the grandaddy of them all is still the Saiga 12.  Definitely on the cheap side, the Saiga 12 is an AK-patterned shotgun that starts at about $550, but boy, you can spend as much on a Saiga as you could any top-dollar Benelli.  Once converted, though, it’s like a party in your pants, and also you own a boss shotgun.

In fact, there’s so much to say about the Saiga platform that we’re gonna have to split it off into another piece.  That being said, we like all of these shotguns and really want some private time with all of them.  Not all at once… well, maybe… 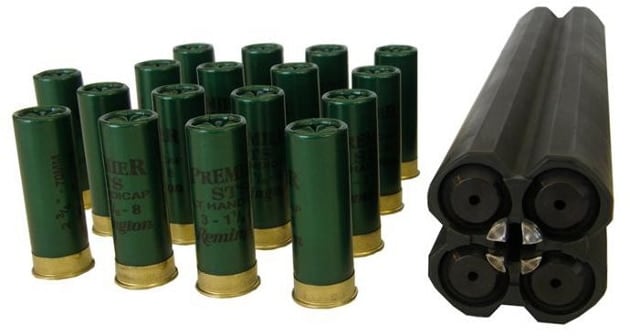