What We Want to Shoot: Nikonov AN-94, The Russian Next-Generation Assault Rifle (Video)

So as you might recall, the Russian military is no longer looking to purchase more AK-74s, on account of the fact that their entire combined armed forces number a million or so (two including reservists) and they have ten million rifles.  Russia’s now shopping for a next-generation rifle.

They’ve been planning this for some time, since the end of the Cold War.  Something to represent a new generation of Russian military.  So they contacted their armories, Izhmash and Izhevsk to make up some new guns to take the AK-74s place.

“The modernization of old weapons is good as a transitional measure or a means to maintain combat effectiveness. According to some sources, the Defense Ministry is directly interested in adopting new firearms and no longer intends to buy old ones.”

Funnily enough, the AN-94 is not that rifle.  Designed by Gennady Nikonov and put into production in 1994, the Avtomat Nikonov-94 was intended to be Russia’s next rifle, but its mechanical complexity, cost to produce, and complex manual of arms all weighed against it in the battle to be issued en masse.  But it is in production and gets used by Russian operators like the dudes of Spetsnaz.

Mostly because it’s so damn bomber.  The rifle has a maximum firing rate of 1,800 rounds a minute and is capable, in two-round burst mode, of putting two bullets into the same hole.  For both effectiveness on soft and armored targets, it’s unbeatable.  It has three firing modes, plus safe: semi-automatic, two-round burst, and fully-automatic, the first shot being a high-speed burst and the subsequent shots cycling at a less-rifle-melty 600 RPM.

The rifle is not at all patterned on the AK-series of rifles and that should become apparent when you hear that it has an internal sub-receiver, two magazine feeds, and also, there’s a pulley in there.  Despite being revolutionary it doesn’t suffer unreliability.  To understand what makes it so different is not really decipherable from its describers:

“Since the bolt group is relatively light and the amount of the gas pressure is carefully calculated, the bolt group rapidly goes back, unlocking the barrel, extracting and ejecting the spent case. Due to the recoil impulse, the barrel receiver assembly begins to recoil inside the gun housing, compressing the recoil spring. At the same time, the cartridge rammer quickly strips the next cartridge from the magazine and introduces it into the feedway.

The bolt group, under the influence of its main spring and the return buffer spring, rapidly goes forward, chambering the second round from the feedway. As soon as the bolt group locks the barrel, the hammer is released automatically, and the second shot is fired with the theoretical rate of fire of 1800 rounds per minute. At this moment the receiver is still recoiling inside the housing, and its recoil is accumulated and not yet affects the shooter and the position of the gun. When the second bullet is fired and left the barrel, the recoil cycle of the receiver / barrel group is stopped, and the hammer is held in the cocked position. At this moment the shooter feels the recoil of two fired rounds simultaneously, ‘shifted in time’.”

Yep, none of that makes sense.  It sorta makes sense, like it’s easy to recognize the words and they have meaning but not in the order they’re presented… Which is precisely why one kind soul made this:

And now it all makes sense.

Even though the AN-94 is not the most practical, ergonomic, powerful, or even recently-designed, we still want to spend an afternoon with one.  Probably have to go to Russia for that… Still, it’s not just shooting two bullets at once that’s so interesting.  We want to know how having the magazine angled like that affects its shooting, if that crazy-looking muzzle brake really works better, and we want to spin that clever yet clearly Russian-designed diopter sight.  Oh, plus it can sling both a bayonet and a grenade launcher, boss (and also extremely Russian). 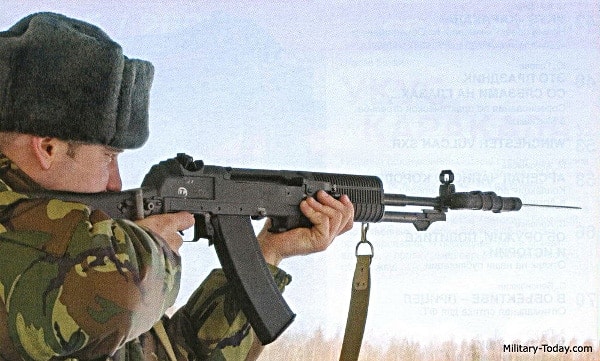