What We Want to Shoot: Robinson Arms XCR (Video)

A fews years back, SOCOM asked the assault rifle world to give them a better gun than the M4.  They called this the SCAR competition, for Special operation forces Combat Assault Rifle.

Clearly, the Robinson Arms, or Robarm XCR did not win; Fabrique Nationale’s aptly-named SCAR did.  The FN SCAR is a fine rifle, no one’s claiming otherwise; the latest sniper support SCAR is downright gorgeous.

But the reason the SCAR was selected over the XCR is simple: the XCR never entered the competition.  Robarm didn’t meet the qualifications of the competition by not supplying blank firing adapters.  What is arguably one of the most innovative and impressive modern battle rifles made in the 21st century got kicked out of the game before it started for having the wrong muzzle device. 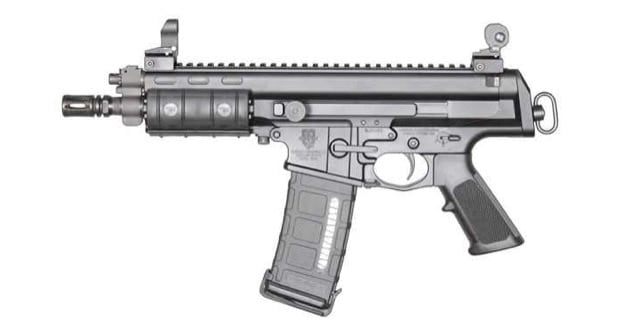 So when you look at the AR, if you were going to pick one single potential point of failure for it, you go straight to the gas system.  This is why the SCAR uses a short-stroke gas piston.  This is why pretty much all top-tier AR variants do.

When Robarm looked at gas-piston rifles, they looked at the granddaddy of them all.  The rifle that has been found in mud and sand, lost for decades, still loaded, still operable.  The XCR uses a long-stroke gas piston.  The AK’s gas piston.  And it’s been ever-so improved with an adjustable gas port.

The XCR is one of the simplist AR-patterned rifles, if you can even call it that.  It just doesn’t have a lot of parts, even when you take into account the pins and trigger parts, and that’s always a good thing.  Sure, it’s available in 5.56 NATO and takes STANAG magazines, but its operation and manual of arms is different to the point where it only counts as an AR insomuch as it looks a little like one.  With a left-side non-reciprocating charging handle, extended barrel bolt, and no buffer tube.

That’s one of the cooler things about the XCR.  With no need for a buffer tube, the rifle can be used with folding stocks.  The prototype used a tube-style side-folding stock, although Robarm just announced their new version which looks like a SIG stock that’s been eating right and jogging every morning, with a telescoping buttstock and adjustable cheek riser.

But it wouldn’t be a SCAR contender if it didn’t feature one thing: caliber interoperability.  And this is where the XCR trumps all.  It uses a barrel bolt that can be unscrewed with hand tools, and the barrel slides right out.  It can be swapped by anyone in almost any condition, in no time at all.  It’s currently chambered in 5.56 NATO, 6.8 Remington SPC, and 7.62x39mm, 7.62 NATO, and 5.45x39mm, and rumors about 6.5 Grendel persist, especially now that 6.5 Grendel is a SAAMI-approved chambering.

Despite being disqualified by SOCOM, Robinson Arms continues to develop the XCR.  It’s now available in multiple lengths and sizes, from full-length rifle down to pistol versions, and they’re inching closer and closer to the military spotlight.  It is formally one of the contenders to replace the Army’s M4s, and we can’t really find any problems with that.