What We Want to Shoot: TDI Vector, or the Kriss Super V (Video)

As a collective, we at Guns.com have shot a lot of firearms.  Many trips to the range and the woods between all of us.  And yet, you can’t shoot all the guns, not even if your name rhymes with FPS… Prussia.  (Where does he get access to all those… no, it’s not worth speculating.  Now, finding where he lives, on the other hand, well… Ahem, sorry.)

And one of the guns we dream of owning, and settle for shooting, is the Kriss Vector SMG, sometimes called the Super V, originally prenomee the TDI Vector, back when KRISS USA was Transformational Defense Industries.  Legend has it that it was dreamed up by a mad Belgian waffle-iron-maker, driven to edge of his sanity by staring into too many little squares; one day he just snapped, and locked himself into the factory’s tool shed with an old 1911; he wanted to kill himself but he was super-Catholic, like he was one of those folks that goes to Mass on Wednesdays, and he just couldn’t do it.  But he found another way out: after all those squares, he delivered the world’s most advanced hole-puncher ever made… And ask yourself, is it a coincidence that waffle iron squares have .45″ sides? 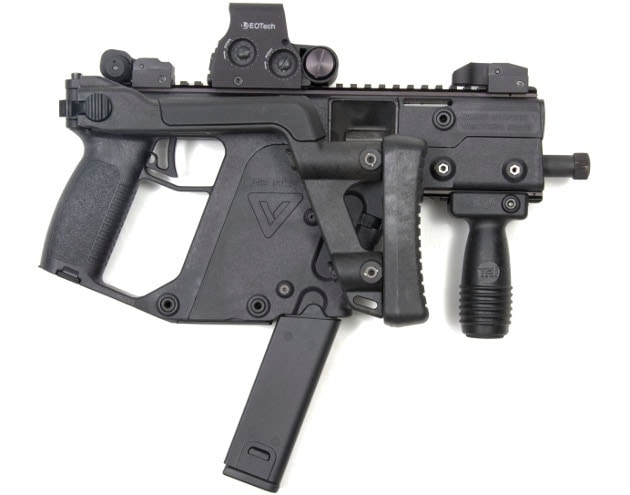 But that’s the legend, where in reality, the TDI Vector’s inventor was sane engineer and French weapons inventor Renaud Kerbrat working with, for some reason, Timothy Lindsay, MD.  We’re guessing that Kerbrat’s contributions were the majority.

The gun is a blow-back design, not uncommon for submachine guns, but it uses a delayed-lock breach that’s somewhat like the one used on so many HK firearms.  The breach is connected to a buffer, like on ARs and the MAS-38, but the buffer is cammed to travel downwards and not rearwards like on, well, pretty much all other small arms out there.  Forgive us if we’re wrong, but the Super V is startlingly unique.  (And if it’s not, let us know.  We’ll dream about shooting that one, too.)

That’s what gives it the blocky sci-fi look.  But there’s no mistaking it for a grand ol’ gun, either.  And it’s getting an update already; only a couple of years old and renamed twice, Kriss has been strutting around with a Vector K10.  Modified to add ambidextrous controls, an improved charging handle situation, it also gets a stubby little quad rail for a pistol grip and lights and stuff.  It’s also rumored that they’re rolling out their own magazines (based on Glock magazines) but a full 30 rounds in a stick.  Currently you add a magazine extension (looks like a Magpul) on there to convert a Glock 21 13-round magazine to a 30-round stick.

But the mostest coolest thing about the K10, oh right, and it’s easier to take down and strip, the coolest thing is that it’ll be available in .45 ACP, but also .40 S&W and 9mm.  And still, it gets better!  The caliber conversions will be user-swappable.  One gun, three guns!  One in .45 for when you need mass or suppression, 9mm and .40 cal for departmental bullet happiness!

Of course, they’ve all been made post-1986, which means it’s not legal for citizens of the United States to own.  Fortunately for us and a smart move for Kriss, they make street-legal Super Vs, (really, if not for a model regular people could buy, we doubt they’d survive long enough for departments to consider them as an HK alternative).

But while we can appreciate the recoil reduction across a few fast double-taps, we long to shoot the Super V with a fun button.  It’s a gun we really, really want to shoot.