What's better than a SIG 1911? How about three of them 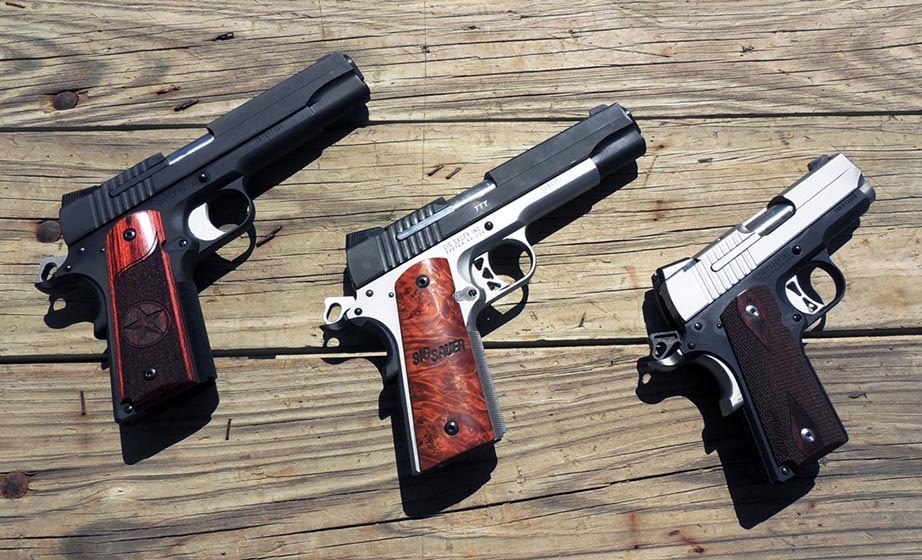 When John Moses Browning designed the “1911 Automatic Pistol” in the early 1900s, he could not have imagined that more than 100 years later his gun design would still garner as much enthusiasm and loyalty as it does. Before the U.S. Military selected it as the primary sidearm in 1911 and even today, millions of 1911 enthusiasts still love it and swear by it. It has certainly proven itself over the years. From innumerable combat operations with all of the armed services to competition and self-defense, the 1911 remains not only a viable firearm, but one that — for many people — is still their first choice.

The 1911 is available from hundreds of makers, in price ranges from a few hundred dollars (for a reliable one, true to the original design) to several thousand dollars (for very fine custom guns, with many modern additions). With so many choices, there exist multiple books, magazines and websites dedicated to breaking down the available configurations for you to choose from.

One of the companies that have been offering 1911s for years is SIG Sauer. It offers one of the most extensive lines of 1911 pistols you can find: more than 41 models, at last count. They range from a traditional line, which follows the original Browning design, most visibly the classic round-top slide, to more customized designs with the more squarish-top slide. They are available in many different configurations and calibers, from “government” sized (featuring five-inch barrels, full height grips and an eight-round capacity) to “carry” sized (with 3.3-inch barrels, short grips and seven-round capacity magazines).  Available calibers are .45 ACP, 9mm Luger, .40 S&W, .22 LR and even .38 Super.

I had the chance to test several of SIG’s 1911s recently and found them to be surprisingly good overall. As is traditional for SIG, they are well built from top-notch materials, well-fitted and very reliable and solid. In addition, their modern designs are particularly attractive.

All of the SIG 1911 pistols tested were from the standard line and incorporated many of the upgrades and accessories that people have come to expect from modern firearms. These include checkering on the front strap and mainspring housing, beavertail grip safety, night-sights, an external extractor, match-grade barrels, extended thumb safety and SIG’s very tough Nitron finish on the slides.

The tests ran were geared towards the more casual firearms enthusiast who is interested in the practical performance of a firearm at the range from a “real-world” standpoint. The primary focus was evaluation of quality, reliability and accuracy of the pistols. I tested ammunition manufactured for the purpose of self-defense as well as ball ammo. 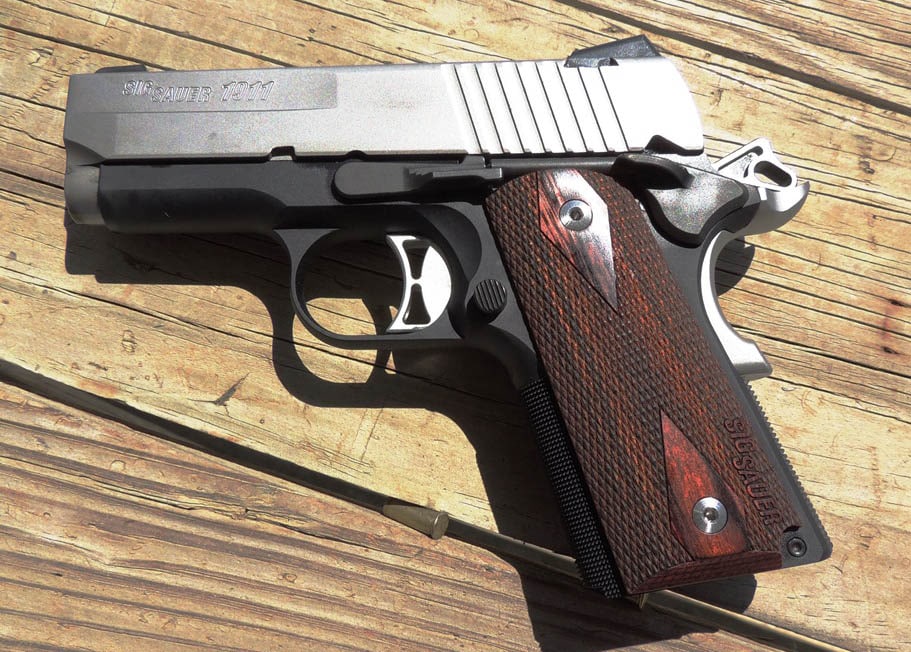 The first one tested was the carry-size SIG 1911 Ultra Two-Tone. A small 3.3-inch barreled pistol with a short grip and seven-round magazine. It is primarily designed for concealed carry, while still offering the power of the .45 ACP round.

Although it was the smallest 1911 with a short sight radius, it felt good in my hands and was as accurate as the full-size guns. It was easy to shoot as well, even with the slightly greater recoil. As with most of these small 1911s, it does not use a traditional 1911 barrel bushing. Instead it has a bull barrel arrangement, making it slightly different to disassemble. 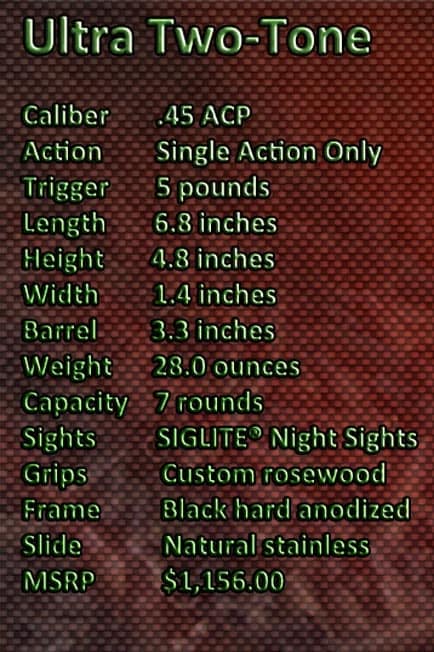 The SIG Ultra performed well, although a few extraction issues occurred. First I attributed the issues to the Tula ammo that I ran, due to expanded casings, but the same issues occurred with a Hornady Critical Defense cartridge as well. I suspect it may be a minor issue with the extractor, since it only failed to extract a couple of times out of about a hundred rounds. SIG Sauer, since then, has noted that a total replacement is coming soon, due to an unspecified mechanical defect.

Accuracy and ease of use were on par with its full sized cousins, firing both FMJ Tula and hollow nosed Hornady defensive rounds. At 10 yards, the Ultra hit its mark over and over, with flair and grace.

I give this carry model high marks as a good choice for concealed carry, thanks to its good blend of size, power and ruggedness. 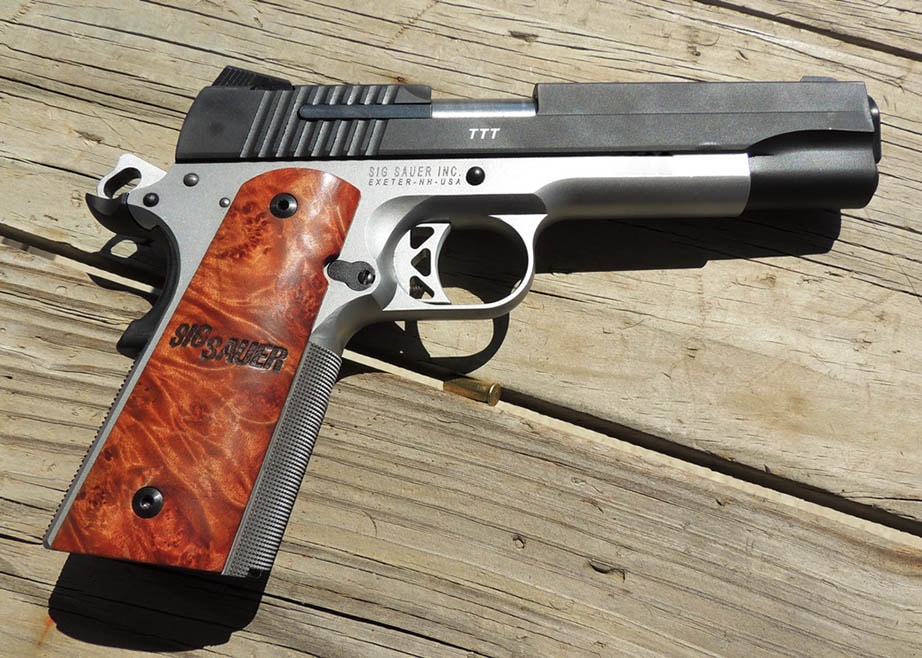 The next shooter on the list is the SIG TTT, or Triple-T, which is one of the nicest-looking 1911s I have seen. Its two-tone construction coupled with the very beautiful, smoothly burled maple grips makes for a pistol that is a joy to behold. Although many may not like the idea of smooth grips, the fine checkering on the front and back straps allows for a firm and solid hold, even in the southern heat. It has the SIG-style squarish slide and this full-size 1911 ships with a 5-inch barrel and standard height grip that comfortably houses either of the two eight-round magazines that come in the box. 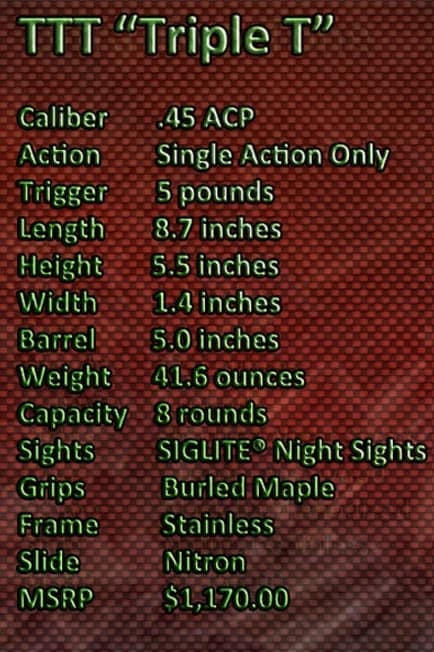 The SIG TTT is an absolute joy to shoot. It has the heft of a full sized 1911 and performs flawlessly with most magazines and ammo.

Accuracy is exceptional and the sight picture across the SigLite sights feels natural. The original TTT comes from the factory with adjustable combat sights, but they were replaced with the commander-style sights on this particular handgun. Muzzle flip and recoil are very manageable, as the solid stainless slide absorbs most of the shock.

The TTT cycled Tula steel-cased ammo, Hornady Custom, Critical Defense and Zombie-Max rounds without a single hiccup, even while using several brands of magazines. The only issue was that some magazines prevented the slide from remaining open after the last round, but this is not unusual with 1911s.

For those who prefer full-size 1911s and appreciate a fine finish, excellent quality and consistent performance: this would be a good choice any day of the week. The TTT model has also been dehorned, so it would work well for concealment if you were to choose to carry a full-size firearm. 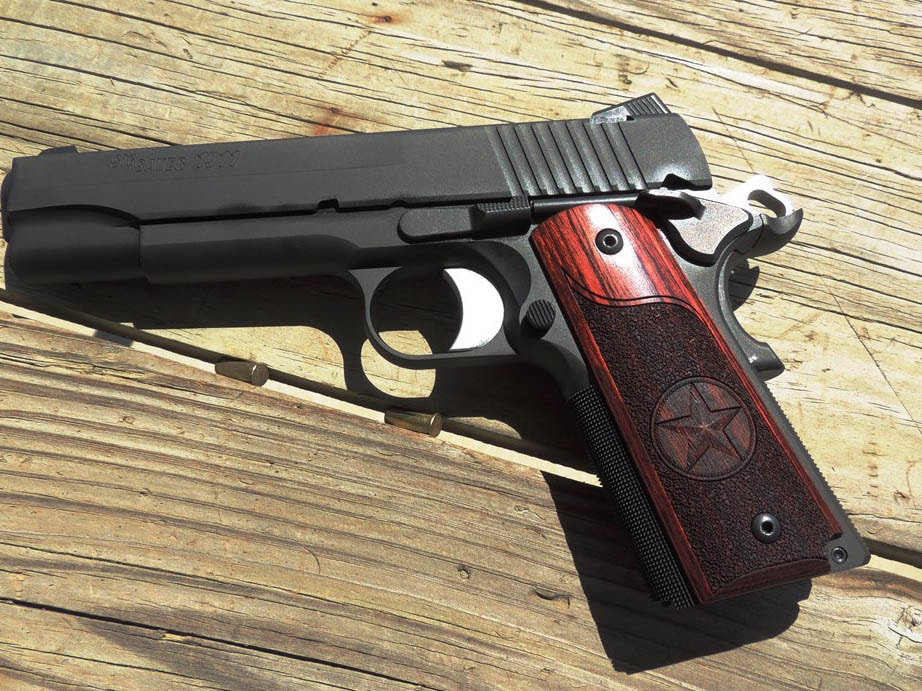 The SIG 1911 Texas, with its Gold Star will awaken your inner cowboy. (Photo by Henry Kadoch)

This pistol is basically a standard SIG Nitron-finished full-size 1911 with a Texas twist. The Texas Edition does not currently appear on SIG’s website, but I have seen several of them up close in Texas. 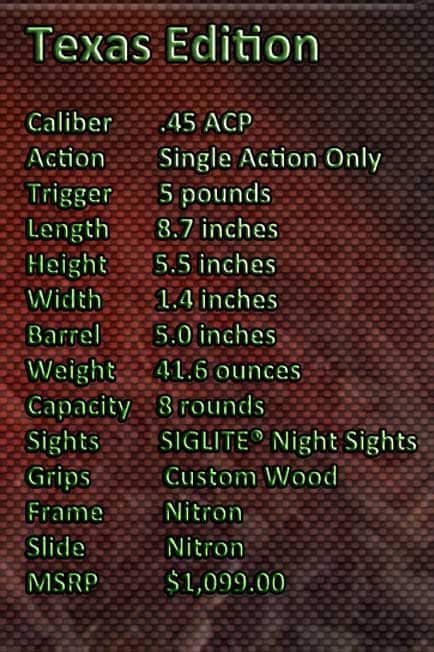 SIG makes numerous special editions for different states, state agencies, etc. The enhancements added are custom wood grips engraved with the Texas star, an engraved map of Texas on the top of the slide (in front of the rear sight) and special serial numbers in the form of TX1911xxx. However, its form and function are almost exactly those of the TTT model.

There were no issues with the Nitron, except for one failure to feed with Blazer aluminum cased ammo. Other than that, it happily ate all types of ammo fed from several types of magazines without a hitch.

Accuracy and feel were also very good, providing a solid platform for target practice or home defense. The Nitron is not as smoothly finished and dehorned like the TTT, but still has a very nice matte black finish.

This would be a great choice for open carry or service,and of course, will take all of the abuse that you care to give it in stride.

The full array of SIG 1911s impressed me. They are very well built, well finished and they all performed well. I’m sure the Ultra will too, as soon as SIG’s excellent service department is done with it.

While SIG Sauer may not be the first manufacturer to come to mind when you think of 1911s, perhaps they should have your consideration. The company boasts a very extensive line of pistols for all purposes in all sizes and calibers. SIG has definitely surprised me with their excellent 1911s and I look forward to handling more of them in the future.