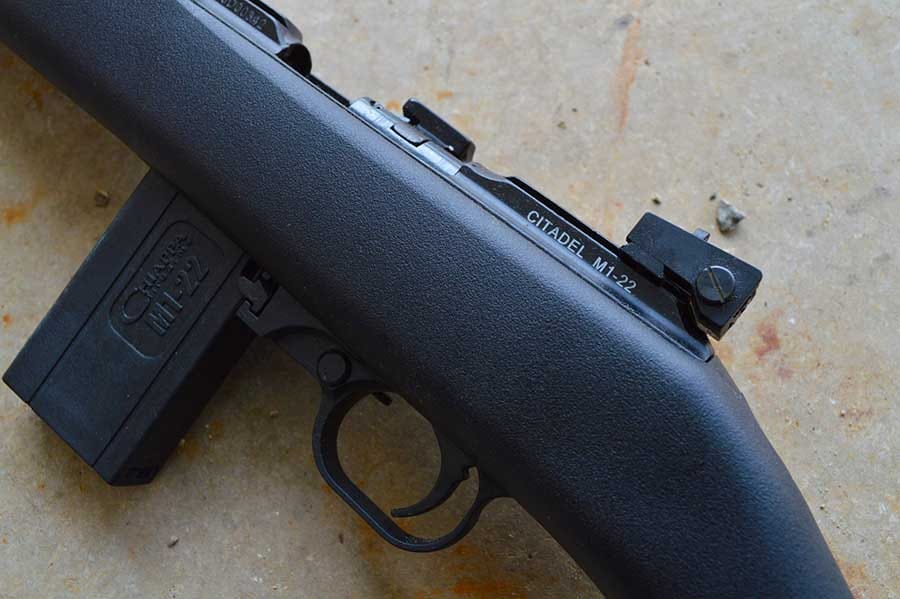 The War-baby now comes in an even softer-shooting caliber. (Photo by Kristin Alberts)

What do you get when a classic WWII gun collides with a plinking-man’s .22 rifle? The Chiappa Citadel M1-22. Fans of the original M1 Carbine will quickly recognize the trademark features of the old standby now replicated into a svelte, light, low-budget shooter built to tickle the fancies of both youngsters and the young-at-heart.

No shooter can fully appreciate Chiappa’s new M1-22 without first knowing from whence it came. Aside from the M1 Garand, the M1 Carbine is perhaps the most recognizable firearm from World War II. Like the Garand, its use extended through the Korean and Vietnam eras. The M1 Carbine, however, was built for around $45 — half the cost of a Garand — and weighed only half as much at just over 5-pounds empty.

Short, squat and built to last, the original M1 was chambered for 7.62×33 or as it’s commonly known: .30 Carbine. This, “light gun”, as the military called it, filled the gap between the lesser power and accuracy of  the 1911 .45 ACP sidearms and the incredibly heavy M1 Garands. As a carbine, the overall length on these rifles is just over 35 inches with a barrel length of 18 inches.

One of the most interesting facts about the M1 is that although designed by Winchester, the majority were produced by the most unexpected companies: Inland (General Motors), Rock-Ola, IBM and Underwood of typewriter fame. While most of these classic rifles now rest in the gun safes or on the walls of reverent owners, the design has not been put to bed.

Envisioning a market for the carbine in a caliber more available and affordable — if any shooters consider .22 LR ammunition to be either of those right now — Chiappa’s Citadel line hit the rimfire market.

The most noticeable feature upon handling the M1-22 is its incredibly light weight. At just a hair over 5 pounds empty, like the original, the rifle barely ducks feeling like a toy gun. While the barrel and bolt are built of steel, the other parts, including trigger guard and magazine, are polymer. Yet as soon as you load up the 10-round detachable magazine and pop over a row of cans with the adjustable sights, you realize this is anything but a toy.

I had the pleasure of shooting both the synthetic and walnut stocked models and must admit to being a sucker for the wood. Chiappa offers their synthetic stocked models in the appealing camo patterns of Muddy Girl, Harvest Moon and Moonshine in addition to the standard black. They also claim that their stocks are interchangeable with the original, though I did not have one lying around to swap. Perhaps they’ll go a step farther and clone some of the variants of the original M1A1 family with folding stocks and flash suppressors.

The Citadel M1-22 comes with integral bases for quick scope mounting and the rear aperture sight is removable for easy optics mounting. I tested out the rifles with only the open sights. I can’t imagine that the rifle would be a real tack driver at great distances, but to be fair, I didn’t give it that chance. It just didn’t seem right to scope an M1, .22LR or otherwise.

The M1-22 maintains the trademark sling/oiler slot in the stock and a forward side-sling mount. With overall measurements of 35 inches and an 18 inch barrel, the gun is more than reminiscent of grandpa’s old carbine; it’s a clone right down to the bayonet lug. A trigger pull of over 7 pounds seems heavy, but workable. The size of these rifles makes them ideal for young or small-frame shooters, albeit any shooter can familiarize themselves with the benefits of rolling carbine-style.

As far as I can tell by stampings on the rifle and packaging, the Citadel M1-22 is manufactured in Italy by Chiappa, then marketed in the U.S. through some combination of Chiappa USA in Dayton, OH and Legacy Sports International. Several of these new M1-22s have filtered in and out of my local gun shop. They just don’t stay on the rack very long. With an MSRP floating around $399 (depending upon configuration and real world prices almost $100 less) these rifles have sold equally well to young fans of semi-autos and to owners and admirers of real-deal-M1-carbines. The walnut version in particular is incredibly reminiscent in appearance to the original. I’ve seen more than one gun-store shopper mistake it, at a short distance, for the real McCoy.

Also, we at Guns.com have yet to see one, but rumor has it that Chiappa is also producing their replica M1s in an M1-9 version chambered for 9mm. 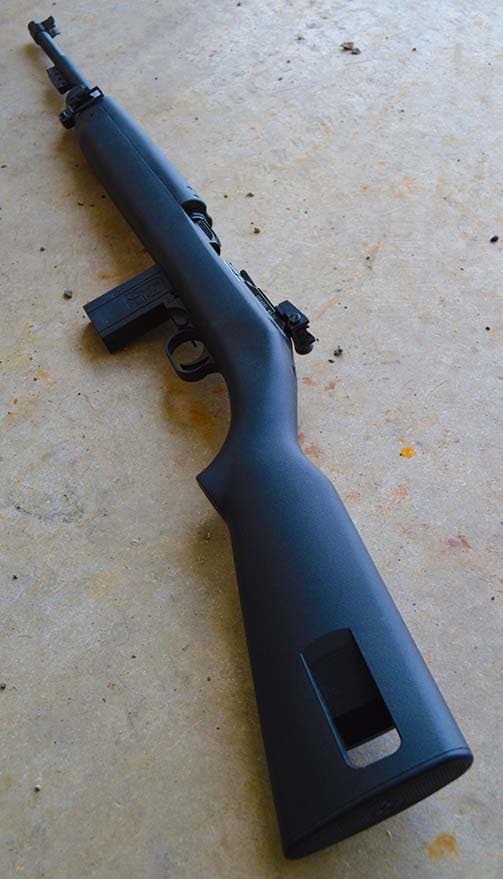 Whether pulling the trigger as fast as possible or slowly acquiring a target, the M1-22 never missed a beat. I ran through every type of ammunition I had. From Remington Thunderbolt, to CCI, to the random leftover .22 rounds that accumulate at the bottom of the shooting bag and still the gun never failed to perform.

Though the iron (read, polymer) rear aperture and front blade sights seemed awfully flimsy to the touch, they maintained their mark and the rear was simple to adjust. I would be afraid to bump the rear sight in particular though, as its profile leaves it particularly vulnerable to, say, a squirrel hunt in thick brush. This makes the polymer sights our biggest gripe with the rifle.

I shot soda cans at 25 yards, reactive spinners at 50 and punched holes in paper up to 100 yards with what I’d consider more than adequate results from a short, light, rifle with open sights. The M1-22 is just plain fun to handle and shoot.

As with any firearm, it’s important to wear glasses. More so when blasting with the M1-22; the blowback action can send empties into unusual places. The controls on the rifle, including the mag release and safety, don’t particularly have that built-to-last-a-lifetime feel, but I were not gentle with our test guns and did not encounter any problems. That being said, if you expect something closer to replica perfection, you may consider putting an M1 carbine stock on your Ruger 10/22. Sure Chiappa’s M1-22 is built largely of polymer, but its price is hard to beat. As with any item, a little buyer-awareness never hurt anybody.

The long and short of it

The Chiappa Citadel branded replica M1-22 is a short, light, rimfire rifle with roots to an all-time classic. For that alone, I applaud the manufacturer. Based on performance, no fan of .22 plinking should feel shorted by this little gun. Whether you dress it down with camo and a scope or stay classy with a traditional walnut stock and olive drab sling, this rimfire is built to please.

If the M1-design introduces a few new shooters to the rich history of classic and collectible firearms, everybody wins.