When the lights go out: Reloading a revolver with a light in hand 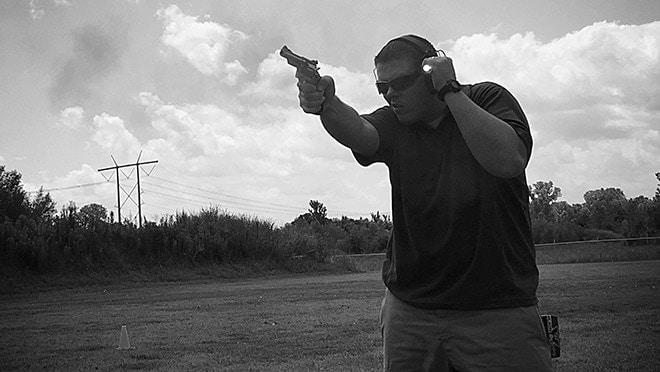 The author draws his revolver as the light fades. (Photo: Nate Parker)

If you have spent much time behind a wheel gun you know two things: they run out of ammunition in a hurry and reloading is comparatively slow and complex. Complicated enough to reload during daylight hours, imagine trying to reload a revolver while also holding onto a flashlight. Add a handheld light to the mix without some prior training and practice (or without a background in juggling) and the task can get incredibly cumbersome.

The obvious answer here is to ditch the flashlight for something like a Thyrm Switchback, if running a Surefire brand ligh. Or use the lanyard loop that come with most flashlights. The lanyard loop is a great idea, if you have enough time to put it on. This is in itself a two-handed operation. It also assumes you can reacquire the light quickly and efficiently.

Another pretty straightforward option is to just drop the light in a pocket — though the need to dig it back out again could present even more of a problem. Consider if spare ammo happens to be stored in the same pocket and then trying to get the ammunition out and into the gun.

An important principle to keep in mind is that if a light is required to shoot the gun to start with, it will likely be required to continue shooting. This means you’ll have to able to reacquire the light quickly and return it to a position that allows you to gain positive threat identification so that you can get back to work. A primary goal through this process is to minimize the downtime associated with using a handheld light by making it easy to reacquire. 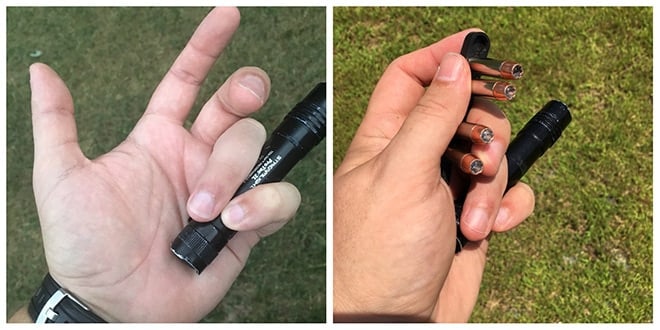 Demonstration of how the light is trapped between the pinky and ring finger, freeing up the other fingers to load the revolver. (Photo: Nate Parker)

When it comes to shooting a revolver with a flashlight — or any handgun for that matter — I default to what is commonly called the eye index technique. I do this for a few reasons: one, it is easy to index the light and the gun on the target simultaneously with this technique and two if I am shooting a revolver, like a J-frame with already difficult to see sights, using an eye index will allow me to use the light to illuminate the sights as well.

This isn’t the only method. Other techniques incorporating a light and revolver are also useful as long as you’re careful to make sure that the hand holding the flashlight stays behind the face of the cylinder. It doesn’t really matter if the light goes in front of the cylinder, but you want to keep all of our skin clear of the barrel/cylinder gap to protect yourself from escaping gases.

Personally I reload a revolver with my non-dominant hand (my left hand), similar to what Michael de Bethencourt teaches.

With the handgun in my right hand and flashlight in my left hand I have to figure out some way to free up enough in my left hand to hit the cylinder release, eject the spent casings, retrieve the spare ammunition and get the gun loaded and back up again. My go to EDC light is a relatively slim Streamlight PT2L, so to free up my thumb, index finger, and middle finger on my left hand to accomplish the reload I secure the light between my ring and pinky finger with the base of the light still in my palm. This technique works amazingly well, especially if I am reloading from some sort of speedloader pouch like a Safariland Split Six or JOX speedloader pouch. If I have to go digging in a pocket for a speed strip it still works, but requires a bit of gymnastics.

To completely free up my left hand I secure the light between the pinky of my dominant hand and the stock of the revolver with the bezel up. This positions the light properly to reacquire it in the non-dominant hand once the reload is complete with a slight rotation of the wrist.

If using a more traditional reloading method (i.e. transferring the gun to the support hand to reload with the dominant hand), the technique of trapping the light between the ring and pinky finger on the non-dominant hand still works. In fact you might even say it works better because the gun and flashlight are being held by the same hand and the dominant hand is free to search in pockets as necessary to retrieve spare ammunition. By adjusting the position of the light to between the ring and pinky finger, the thumb, index finger, and middle finger can be used to assist with the reload as normal if using the dominant hand to operate the ejector rod.

Where this does not work so well is when using what is generally referred to as the FBI technique. This also entails using the support hand thumb to operate the ejector rod. However, with a slight modification, you can get that to work too while maintaining the light in the non-dominant hand:

Instead of trapping the light between the pinky and ring finger, trap the light with the index finger and use the middle and ring finger to roll the cylinder out of the frame and secure the revolver with those two fingers and the pinky on the rear of the hammer. This provides enough stability to use the thumb to operate the ejector rod per usual with the FBI technique.

It is possible to use these same techniques for larger lights as long as the fingers can still wrap around the light. I have used them with a Streamlight HL4 without much issue. However, if the light is too large, like a Maglite perhaps, you’ll have to figure out something else. Typically with a large light, I default to trapping the light under the arm that is also holding the revolver. In my case, that is the right arm. If the support hand is used to hold the revolver while the dominant hand retrieves the ammo and reloads the revolver, it would be that arm. Very straightforward, and easy to accomplish, just make sure the light gets turned on before tucking it away.

With proper technique being able to efficiently manipulate a defensive firearm while also operating or maintaining control of a handheld light is not a difficult thing to do. It gets a little more complicated with a revolver because the gun is basically disassembled and then reassembled during reloading, but even still, it is not a hard thing to do with good technique. It can become very easy with regular practice, be it dry fire or a couple of reloads on the range with a flashlight or a suitable stand-in each time you make a trip to the range.