Trying to find a good competition gun, just like finding the right equipment, can be a daunting task.

Although the options are endless, more often than not most self-defense or law enforcement pistols will do, but, for me, the Smith & Wesson M&P 9 stands out as an excellent choice because it is affordable, easy to operate and modify, and there’s an abundance of accessories and gear for it. 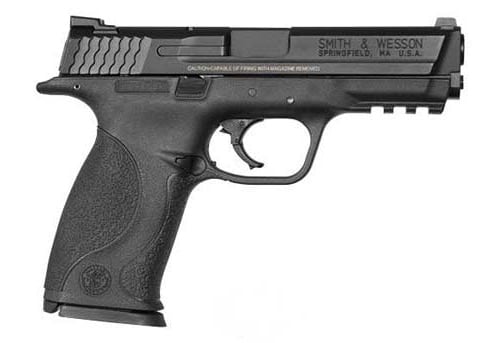 Out of the box the M&P 9 has a lot going for it. Equipped with the 18-degree grip angle made popular by the 1911 platform and easily interchangeable back straps, the M&P is one of the most universally ergonomic firearms on the market. While many advanced competitors prefer to switch out sights to one of the aftermarket platforms, such as 10-8 Performance, the stock 3-dot system is popular among more novice shooters who are accustom to the standard 3-dot set up.

Popular polymer frame pistols also have a huge market for drop-in trigger systems and swapping out the M&P’s trigger system is rather common. Though it’s considered fine for those who prefer to just get the feel for it, some would rather adjust it to their liking. Installing something like a $23-Apex Tactical Reset Assist Mechanism, a small part that drops very easily into the sear block, gives the M&P a positive and even audible reset virtually eliminating any problems with trigger short stroking. Apex Tactical has also released their Competition Action Enhancement Kit that improves trigger pull and trigger return making the gun easy to shoot and fun to run in all different competitions.

The wide variety of aftermarket parts availability for the M&P 9 also extends to holsters and magazine pouches, which are important components to any competitor’s rig. Almost all popular competition and carry brands, including Comp-Tac, Safariland, Blade-Tech, BLACKHAWK! and Galco, have a wide variety of different options for the M&P platform. Meaning competitive shooters can find the magazine pouch and holster set up that works best for them and that they are most comfortable with. 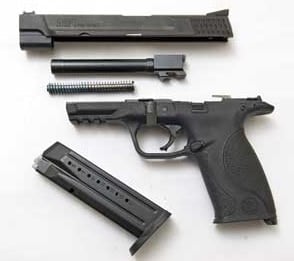 The M&P is also an extremely reliable pistol. It’s been around for a while and it has endured a lot of damage. The most reported failure is a breakage of the slide stop, which, given that the M&P is equipped with an ambidextrous slide stop and has serrations on the slide making it easy to manipulate overhand, is a minor malfunction and a cheap part to replace.

Pistol-training.com ran a 62,333 round endurance test on the gun before the firearm was declared unsafe due to a cracked slide by the lawyers, but not the engineers.

The M&Ps reliability is also reflected in its adoption by law enforcement and military agencies. Currently the M&P is being used by over 260 law enforcement agencies in the United States, including the DEA, and many other law enforcement and military agencies worldwide. The Smith & Wesson M&P 9 can run through tens of thousands of rounds, and due to its self-lubricating design requires minimal cleaning and will run even when dirty, which is important when shooting competitions outside in dusty or wet environments.

The simplicity, reliability and aftermarket availability for the Smith & Wesson M&P 9 make it a favorite among competitive shooters, law enforcement and military professionals.

What is your preferred competition handgun?