Why the Taurus Judge holds its own (VIDEO)

The Taurus Judge, the company’s bestselling and most enduring design. It wasn’t the first time a gun of this type was fashioned, but it was the first time it became successful as a production handgun from an established company. Legend has it that several judges in high crime areas carried the gun under their robes in their courtrooms. Whether that’s true or not, it’s the genesis of the successful two cartridge revolver.

Chambered for both .45 Long Colt and.410 shells, there are countless variations of the Judge available. Taurus built the Judge with a rifled barrel so it qualifies as a handgun and not as a short barreled shotgun (meaning it can’t be banned as a result of the National Firearms Act of 1934).  The only U.S state with an exception to this law is California, where the definition of a short barreled shotgun is broader and consequently bans the Judge. 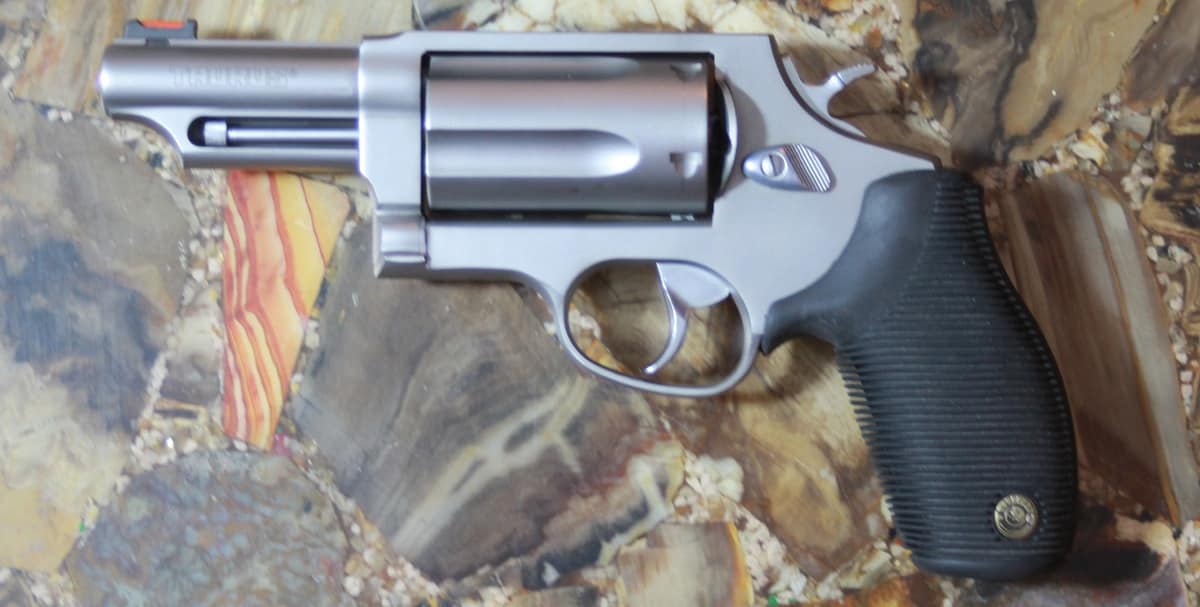 Most people prefer loading the Judge with shot shells and may write off the .45 Long Colt as obsolete. But the cartridge was favored by legendary lawmen, gunfighters and outlaws in the last quarter of the 19th Century. Today it remains as popular with cowboy action shooters and handgun hunters alike. However, hollow point rounds would likely be deadlier than .410 in a self-defense situation. 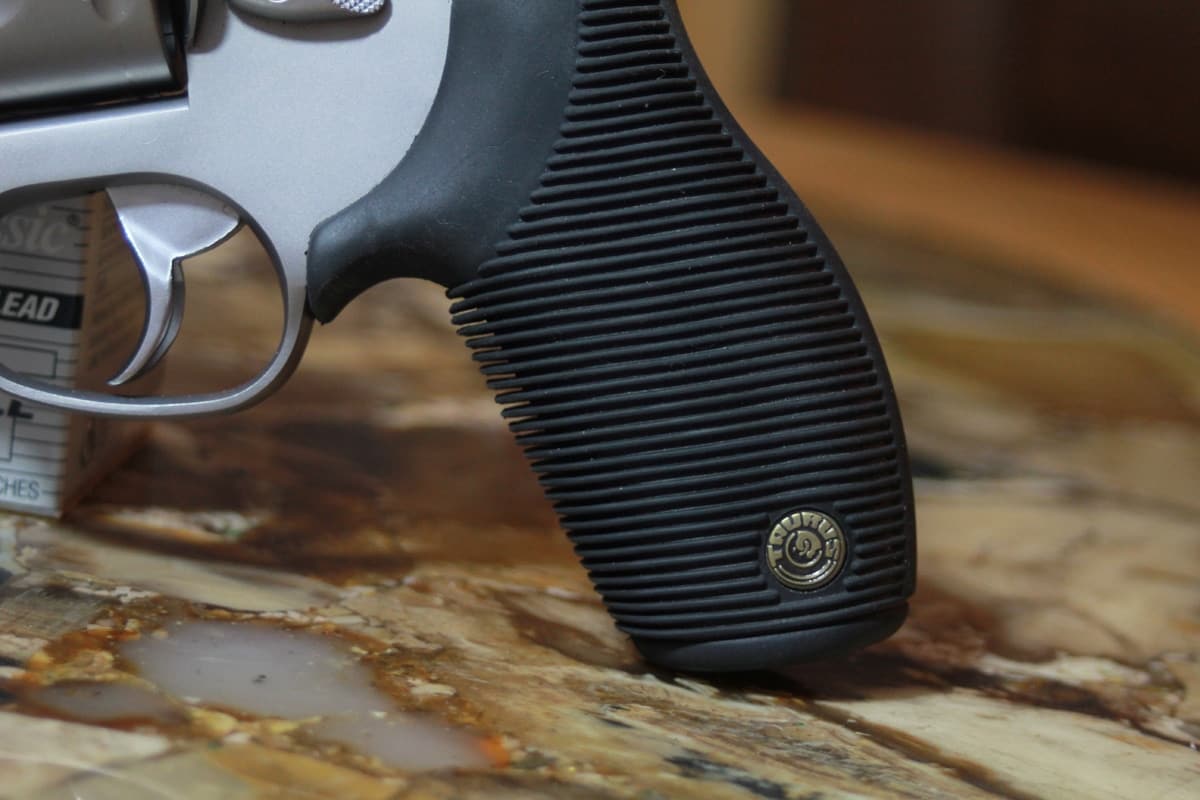 The revolver’s ability to spit out shot is doubly impressive. With a squishy, rubber grip, recoil with the Judge is way more manageable than expected and is actually fun to shoot. After unloading shells into a target, I replaced it and blinked twice at what I saw. Several of the .410 wads embedded in the tree — seven in all. I tried removing the wads on my own and with some effort, they finally came loose. I don’t know if Taurus had the idea of wads embedding themselves in targets in mind when they were formulating the concept of a .410 defensive revolver, but I will say if the wads took effort to be pulled loose out of a pine tree, I can’t even imagine what they would do to a human body in a self-defense situation, let alone if those rounds were buckshot. 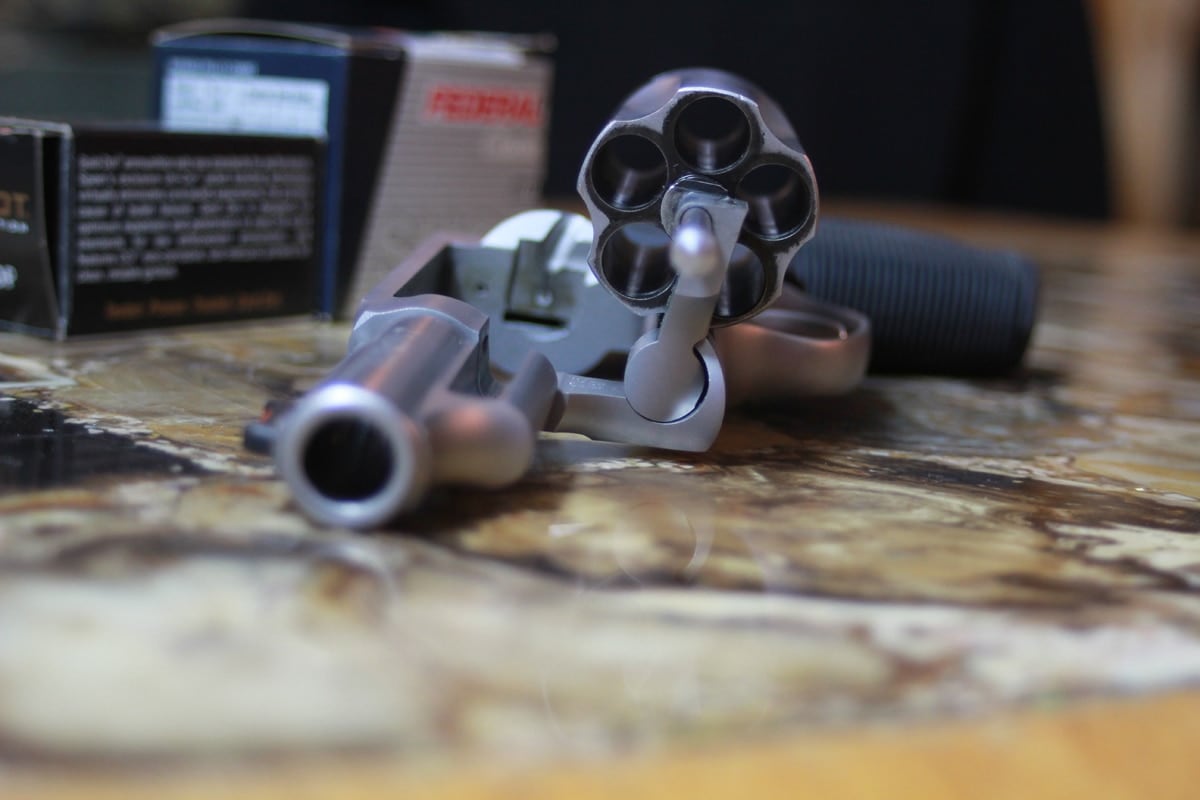 Switching to .45 Long Colt, again, recoil is very manageable. Not quite the same as shooting a Colt Single-Action Army, but still a blast putting rounds downrange.

Accuracy wise, the shooter will punch holes through paper to the best of their ability. For me it was slightly high, my dad and brother had more modest success. But in terms of reliability — absolutely no failures, malfunctions or misfires of any kind. The double action trigger is a bit heavy and would become unpleasant after heavy firing, but I can’t complain since the hammer pull is very crisp and polite, allowing for a light yet controlled single action pull.

Taurus has marketed the Judge as an ideal personal defense weapon meant to sit on the nightstand or in a car, and based on the quality time I’ve spent with it, it is my humble opinion that Taurus has accomplished what they set out to do.

Keeping in mind that most self-defense situations happen up close in mere seconds, I’d want the Judge loaded with .410 shot simply for a better chance of hitting my attacker. In other words, the Taurus Judge would additionally make a worthy addition to any gun collection — now all I’m waiting for now is a 12-gauge model.  The Taurus ‘Executioner,’ perhaps?