You may have noticed – I kinda have a thing for the .460 Rowland cartridge. Part of that is due to getting to shoot a Wilson Combat Hunter in .460 Rowland while testing the cartridge for Ballistics By The Inch. Getting a 230-grain bullet to over 1200 fps out of a 1911-style gun just impressed the hell out of me.

Wilson Combat has earned a very solid reputation for producing great custom guns. Their 1911-pattern handguns are highly respected, but also command a fairly hefty price. The Hunter in .460 Rowland is one such full-sized gun. 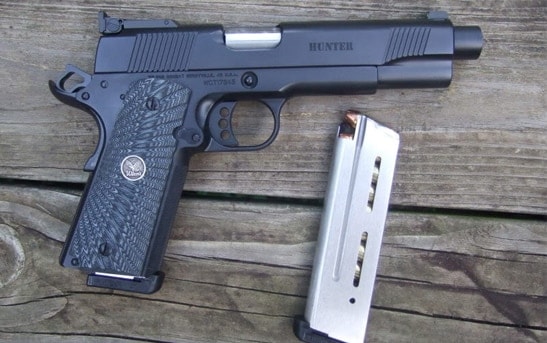 The one I got to try was a few years old, but hadn’t been shot much. I’d actually had a chance to put rounds through it a few years earlier and enjoyed the experience, but at the time I didn’t realize just how powerful the .460 Rowland round actually was. In truth, it felt mostly like shooting some hot +P .45 ACP rounds. Running it through the BBTI tests confirmed it though. And since then, I’ve had a chance to shoot it with a number of additional .460 Rowland loadings.

I like 1911s as a general rule and the Wilson Combat Hunter is a very nice take on the popular design. It has a 5.5-inch barrel, designed with the extra length because it is intended for actually hunting large game and some states require any handgun used for such purpose to have a barrel greater than 5 inches.

Unloaded, the gun weighs just a tad under 40 ounces – typical for the 1911. Because of the extra power, the gun has been beefed-up a bit with stronger springs and a standard shock buffer.

The fit and finish are exquisite – what you would expect from a high-end, custom gun. It’s not just that everything is nice and tight, but there is clear indication that all the little things have been well thought-out and executed.

The barrel ramp is fully supported. There’s a slight bevel to the magazine well – to make it easier to position and then load magazines. Nice checkering on the front strap and mainspring housing. Serrations on the trigger and hammer ensuring solid contact. Front serrations on the slide for a more positive grip when cycling the gun manually. The rear notch sight is fully adjustable. The trigger is likewise adjustable and is smooth as glass. It breaks crisply and cleanly.

Everything about the gun looks and feels solid. And I can’t recall a single glitch in shooting any ammunition, over three separate trips to the range (and four different people shooting the gun). It always loaded properly, fired properly, ejected properly – not a single problem especially since it hadn’t been through any kind of ‘break-in’ period.

Accuracy? Well, excellent. Wilson Combat guarantees 1 inch at 25 yards, and I have no reason to doubt that in the slightest. Certainly, the gun shot better than I do and the 3 inch or so groups I was getting at 25 yards were more a reflection of me than the gun (the Hunter now comes standard with Crimson Trace laser grips, for those who like that for low-light conditions).

For me, shooting a 1911 in .45 ACP has always meant very manageable recoil. Because of the low pressure of the round, it has felt more like a solid “push” than a fast “snap” such as you get from something like the .40 S&W. When you step up to +P .45 ACP rounds, that starts to change the character of the recoil more, but because of the size and weight of the gun, it is still quite manageable.

Well, the Wilson Combat Hunter in .460 Rowland does have more of that characteristic “snap” but it still isn’t bad. And you get a great deal more power over the .45 ACP. I don’t think that it is quite up to full .44 Magnum power, but it is starting to get into that range, with the Muzzle Energy surpassing 800 foot-pounds for some loadings. And if you’re of the “fat and slow” school, then there’s a load for that, with a 325 grain bullet moving about 825 fps – the standard velocity cited for the 230 grain .45 ACP round.

At just shy of a $4,000-base price, this isn’t the sort of gun that will be found in every safe. But for those who can afford that kind of expense, it’s an excellent choice.