During WWII, a number of countries developed lightweight, simply-constructed submachine guns. One of these was the Soviet PPS 43, which fired the 7.62x25mm Tokarev round.

Well, sometime shortly after the development of this SMG, the Finnish army got their hands on one, reversed-engineered it, and then chambered it for the 9x19mm cartridge and made it capable of using their Suomi KP/ 31 SMG magazines. (Curiously, the PPS-43 had been a simplified version of the Soviet PPS-41, which itself was a reverse-engineered Finnish Suomi KP/ 31). The Finns called this new gun the KP-44, and it proved very popular and quite functional. And since it proved both popular and functional, quite a few were produced over the years. Enough so that there are a fair number of the things around, as well as parts for the same.

As a result, any number of “kits” have been created using these parts as well as additional ones to make different configurations of the guns. Some of those configurations came with the need to get a Class III stamp and paperwork through the BATFE. Some didn’t. And some kits were assembled by small gun manufacturing shops with the appropriate changes made to make them civilian legal. One of these was a KP-44 pistol made by Wise Lite Arms and sold through Smith Manufacturing Group. I recently had a chance to shoot one of these KP-44 pistols.

To make it comply with BATFE regulations, it only needed some fairly minor changes. The most important of these was welding the foldout stock in the closed position, so it wouldn’t be considered a Short Barrel Rifle (SBR), and making it so that it was a semi-auto only firearm.

To accomplish this, the operating mechanism was changed from an open-bolt design (where the bolt strips off a round from the magazine, chambers it, and fires it, then blows back to the starting position as a function of recoil) to a closed-bolt design found on most modern semi-auto firearms. But other than that, the gun is largely all original parts from the KP-44.

When my friend who owns the KP-44 pistol took it out of the case, I thought that it looked a lot like an old Walther MP SMG from the 1960s. And honestly, it felt a lot like shooting the Walther in semi-auto mode because the KP-44 is small, compact and light – not to mention a lot of fun to shoot. 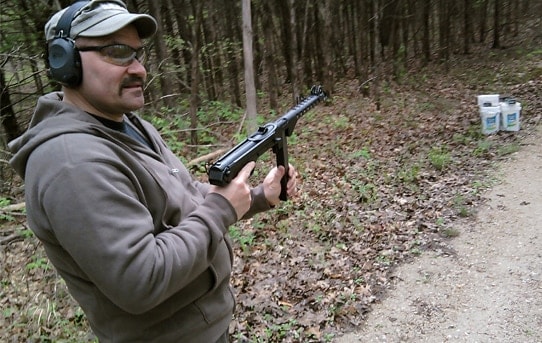 Even though it was made from mostly old parts, the gun itself was in pretty good condition. I think that Wise Lite Arms must have re-done the finish on all the metal parts because they seemed almost new, and the welds holding the shoulder stock in place were covered. And the wooden grips were fairly crude, but functional.

The magazine was probably WWII-era, and looked it, but it worked just fine. I think it was rated to hold 36 rounds, but we just stuffed 9mm rounds into it until it was too hard put anymore in.

It’s important to remember that this is a pistol, meaning there’s no front grip or fore-stock to hold onto. And if you think grabbing the receiver body will work, think again. That would actually put your fingers in the way of the operating mechanism. However, the magazine was solidly seated in the gun, and it was natural to hold onto it for additional stability when shooting.

The sights were simple, functional. Rear notch, front military-style post. The trigger was likewise simple, but not as rough nor as hard as I expected.

And the accuracy was better than I expected, easily as good as the actual carbines we also shot that day. We were just shooting casually at tin cans and 6-inch steel spinners, but it was easy to hit those at 25 yards. 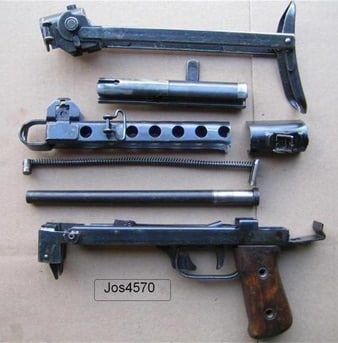 Recoil was minimal. The gun is fairly lightweight (perhaps four pounds). But there was still enough there to suck up the energy of shooting it.

Function was fine. We didn’t have any problems with either ball ammo or JHPs. It’s a pretty simple system, all in all, and there isn’t a whole lot that can go wrong with it.

What I really think…

Again, it reminded me of shooting the Walther MP, or my Kel-Tec Sub 2000 – though of course it was shorter than both of those guns.

The KP-44 isn’t the sort of gun you’ll find in every local gun shop. And if you do find one, there’s no saying that it was put together by Wise Lite Arms. But they’re out there, and if you find one with their name on it (or SMG’s), you’re probably looking at a decent quality gun. And if the price seems good, I’d be tempted to get one.

(Price is going to be hard to determine seeing as the only listing found online said $795, but if Guns.com were to guess probably between $500 and $800.)