Your hunting season over? Time for some spring cleaning... 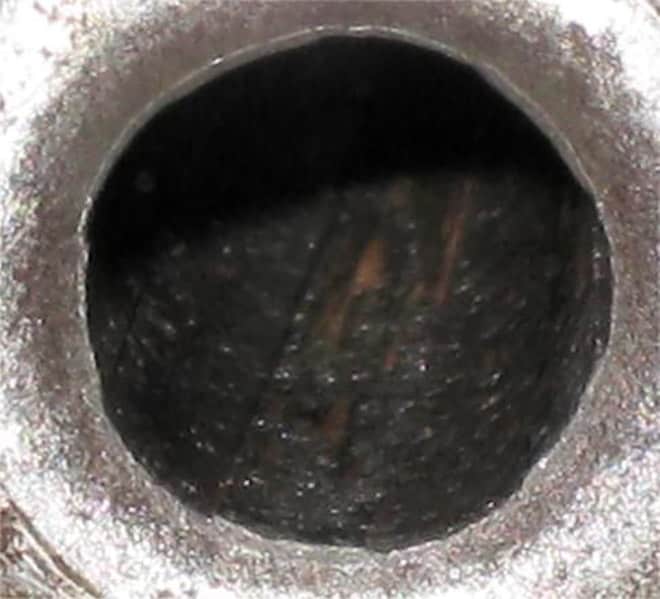 Pitting inside the barrel of a Traditions Panther .50 caliber, bought used. A dirty barrel like this can spell failure on your next hunt. (Photo: David LaPell)

With hunting seasons mostly over, it may be time to think about putting your treasured game-getters away until their moment comes again this fall. Keeping these guns clean is essential — no different than keeping any other tools in fine shape. Why? Because of something I see happen every year: guns come out of the cabinet with a pitted barrel, rusty or with much worse surprises in store.

The first gun (besides your squirrel guns) you may likely be using this fall is a muzzleloader. Here in New York we have both early and late seasons so if you tag out early you can sleep in during that last cold week after the regular season ends. Out and about with other hunters, I have noticed that muzzleloaders are usually the guns I find to be the dirtiest, not just because that’s their nature, but because some people seem to have never learned to take care of them. This is especially true of the newer inline guns.

I believe what often happens with these guns is that a hunter will fire off a shot or two and then think that the gun doesn’t need to be cleaned because they are using a black powder substitute instead of the real item. That can be a mistake that costs you a freezer full of venison.

I recall seeing a Traditions Panther .50 caliber once that the previous owner apparently never cleaned. There was some light rust spots on the outside of the barrel, but the inside was cherry red and the nipple was so corroded I had to swap it out with a new one because of how badly it was plugged. The store owner didn’t want to bother with it so for $50 I took it home and spent a whole afternoon scrubbing, cleaning and changing out the nipple. I got it to shoot again and it shot quite well — all over a little laziness.

All of the black powder substitutes out there, while not as corrosive as the real deal, will cause corrosion if you let them go. While you might not have to use soap and water like you see some of the old timers use, it does need to be cleaned after shooting.

I use Thompson Center’s black powder solvent to clean not only the barrel, but under the hammer and inside the breech after removing the nipple. I soak the nipple itself in the solvent and I try to take a Q-tip dipped in it to every little crevice. I then take Thompson Center Bore Butter and season the barrel. I finish it up by using some never seize lubricant on the threads of the nipple and good old fashioned gun oil to clean up the outside.

With a muzzleloader, rust is always on the move no matter how hard you try. I find it’s best to repeat the cleaning process two or three times before hunting season to keep the dreaded orange dust out of your gun, especially in humid climates. 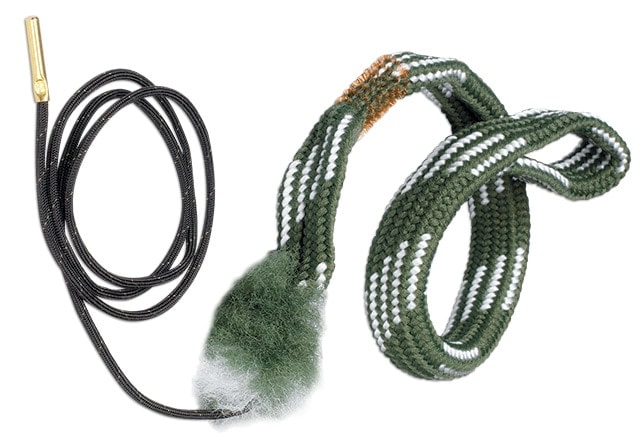 Hoppes Bore Snakes have led a revolution in easy barrel cleaning. Paired by caliber, they can clean a dirty gun in seconds with a few passes through the barrel. (Photo: David LaPell)

Thankfully, modern ammunition and refined firearm engineering methods mean cleaning your long guns is nowhere near as time consuming or critical as with traditional muzzleloading rifles.

If I take a rifle or shotgun out and end up shooting, the first thing I try to do when I get home is give it a perfunctory cleaning. This is a habit I have held for a long time and with the ease of modern gun cleaning products, it’s one you should consider as well if you don’t already. I have found that Hoppes Bore Snakes do a fine job of getting those tough stains out no matter what, and a quick pass takes seconds.

On the day the season ends, even if I have already cleaned the gun, I take it out and give my Bore Snake a further run through the barrel and then oil the stock and metal and put it away. This might seem a bit redundant but I have kept all my hunting long arms in fine condition by doing so. Additionally, during the hot days of summer when the temp starts to go way up, it doesn’t hurt to run a patch or two down the barrel with some oil on it to keep everything in line.

Hunting handguns pretty much follow the same routine, with some considerations for semi-automatic pistols (in which case, consult your owner’s manual).

Cleaning your guns after the season ends, no matter if it’s small or big game, is essential to keeping these tools in fine order for the next go round. It should be done before you sight them in and definitely before you to take them out in the woods. Let me put it this way: if you were a mechanic, you would oil your wrenches and if you were a carpenter you would keep your woodworking tools sharp and in excellent shape. As a proud hunter, your guns should be treated no differently. If you take care of them, they’ll take care of you.