Bad guys are cooler than good guys. It’s an unrefuted fact. COBRA commandos look way cooler than the generic soldiers of G.I. Joe and Stormtroopers are way more badass than bathrobe-wearing Jedi. No, I don’t believe in what they stand for, but they are snappy dressers with the best toys. As a child of the 1980s, I grew up seeing bad dudes rocking AK-47 rifles. If they were seriously bad, with the ultimate evil machine gun: the notorious AKS-47. 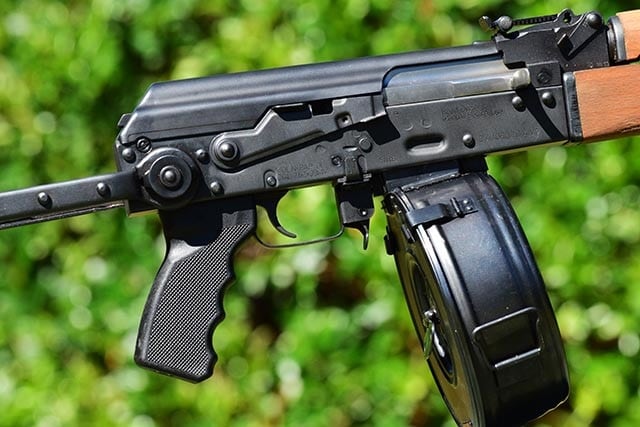 The N-PAP DF, like the standard N-PAP, features a receiver made from 50 percent thicker steel than a standard AKM rifle (Photo: Jim Grant)

Less accurate than its Western counterpart the M16, any kid who grew up during the Cold War knows that if someone has one of these, he’s playing for the wrong team. How could the rifle be a good guy weapon? The designers took the symbol of Soviet military might, the AK-47 and married it to the folding stock from the MP-40 Nazi sub machinegun. So when Century started importing new, factory-built under-folding stock AK rifles from Serbia, I knew I had to have one. But is the N-PAP DF like the Stormtrooper or COBRA soldier, prioritizing style over function?

The first thing any prospective buyer should know about both Serbian and Yugoslavian rifles, is that they use non-standard parts. Handguards, buttstock dust cover and gas tube are all unique to these rifles, and will not interchange with standard AKM rifles. Thankfully, the most important part, magazines, are completely interchangeable. This isn’t a big deal if a shooter doesn’t intend to modify their weapon, but it’s something to keep in mind when deciding between this and a standard-pattern AKM rifle. 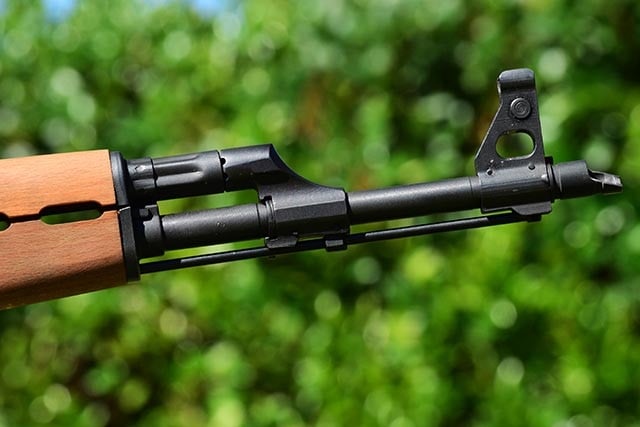 Other differences between AKM rifles and their Serbian look-alikes include the N-PAP’s non chrome lined barrel and stainless bolt carrier. Both parts are more susceptible to rust than standard AKM ones, so shooters looking to buy one should be extra vigilant when cleaning their rifles after range trips with older ammo. This is because surplus military rounds use primers that leave corrosive salts after they’ve been detonated. This was also the case on Yugoslavian AK rifles, but the N-PAP is not a true clone of the Yugo M70 series of rifles.

Like the Yugoslavian weapon it derives from, the N-PAP  includes a receiver that is 50 percent thicker than standard AK rifles, a bolt hold open notch cut into the safety selector lever and an extended handguard. It differs from its militaristic progenitor, in that it excludes several features in an effort to make it more import-friendly without sacrificing quality. For instance, the N-PAP DF does not ship with a bayonet lug, a gas-tube cutoff for launching rifle grenades or flip-up night sights. While the only excluded item that will be missed are the night sights, but realistically the ones that shipped on M70 rifles are over a decade old and has long their phosphorescent glow.  Additionally, the N-PAP DF also lacks the bulged front trunnion found on Yugoslavian M70 and Russian RPK light machine guns. 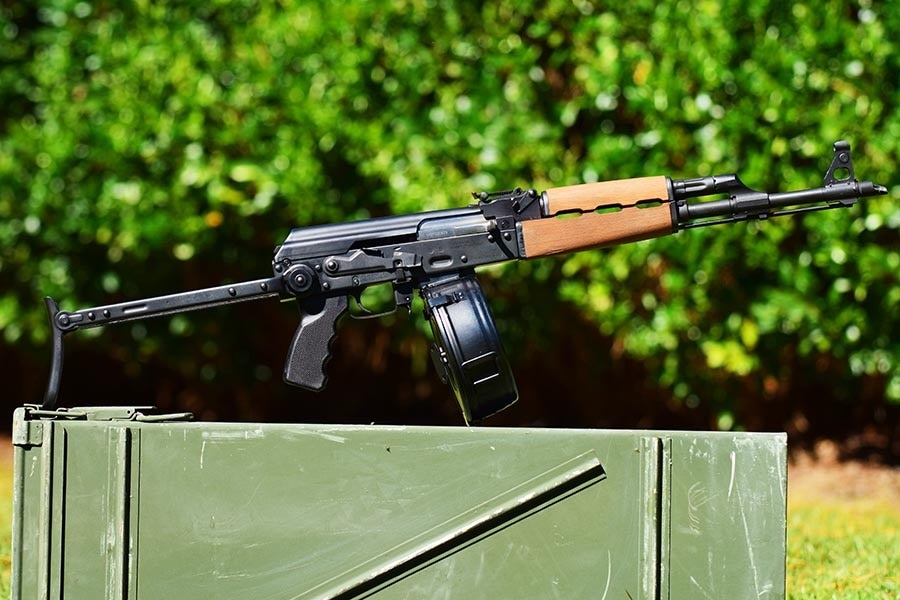 With all these subtractions, why would anyone buy an N-PAP over a traditional AKM rifle like an  AMD-65, Saiga or WASR? In the case of the Saiga rifle, their prices have risen precipitously since being banned. For the AMD and WASR, new buyers have no easy way to determine the build quality without shooting the weapon. The part kits they are constructed of may be mil-spec, but the final fitting, receiver and barrel are not and could be of questionable quality. The N-PAP series of rifles on the other hand, are built entirely in the Zastava arms factory in Serbia. When a shooter purchases an N-PAP, they are receiving a rifle built to the same or better quality standard than what Serbia issues its own troops. 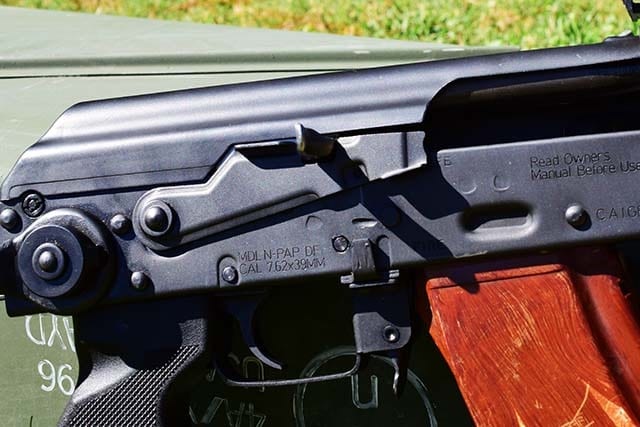 The selector switch has a notch that allows it to hold the bolt open. An uncommon feature on factory-built AKs (Photo: Jim Grant)

So how is this build quality? Leagues beyond the slew of WASR rifles that are regularly imported. The N-PAP rifles feature a hot-blued finish that is much more durable than those found on any of the aforementioned weapons, including the Russian Saiga. The furniture is made from Teak and appears to be finished with boiled linseed oil, thought it could also be a very thin polyurethane. The handguards are fitted very tightly to the weapon, experiencing little to no lateral movement, resist heat decently and are smooth to the touch without being slippery. The fit on the weapon is excellent for an AK, and very good even when compared to Western designs.

This quality doesn’t just feel good, it also contributes to the rifles accuracy, which is nearly on par with the highest quality AK pattern rifle made, the VEPR. Firing from a rest at 100 yards, the N-PAP DF produced five-round groups ranging from 2.5 to 4 inches. The rifle was tested with Klimovsk, Brown Bear Silver Bear and Red Army Standard ammunition. None of these ammo types resulting in any jams across a total of 500 rounds, and the Red Army ammo produced the best groups of the day, averaging three point two inches. 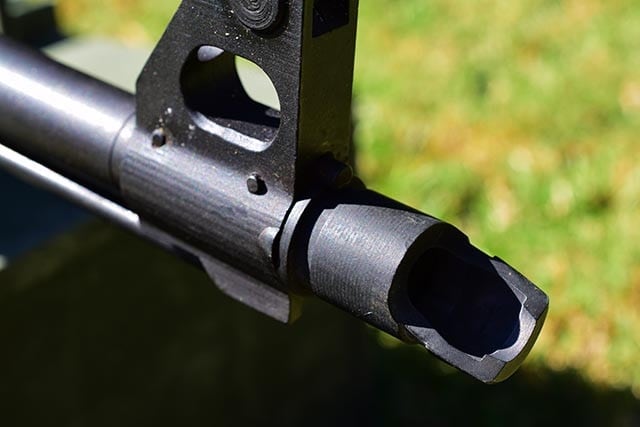 The muzzle ships with a rudimentary slant brake to aid in recoil reduction. (Photo: Jim Grant)

The N-PAP DF feels good in the hand thanks to its finger-grooved pistol grip, extended handguards and somewhat light safety lever. Shooting the weapon is another story. The N-PAP DF’s folding stock is based on the German MP-40 submachinegun, and is constructed of riveted, folded steel that comes to a horseshoe-shaped but. Many shooters, including myself, found this to be tremendously uncomfortable after extended firing sessions.

Strangely, across the 10 test shooters I employed, no pattern emerged that pinpointed what sort of person would or wouldn’t enjoy the stock. Just as many heavy-set shooters enjoyed the stock as those who deplored it. The same was said across gender, height and relative shooting experience. So shooters torn between the fixed stock N-PAP and the underfolding N-PAP DF should try to get some trigger time before committing to buy. 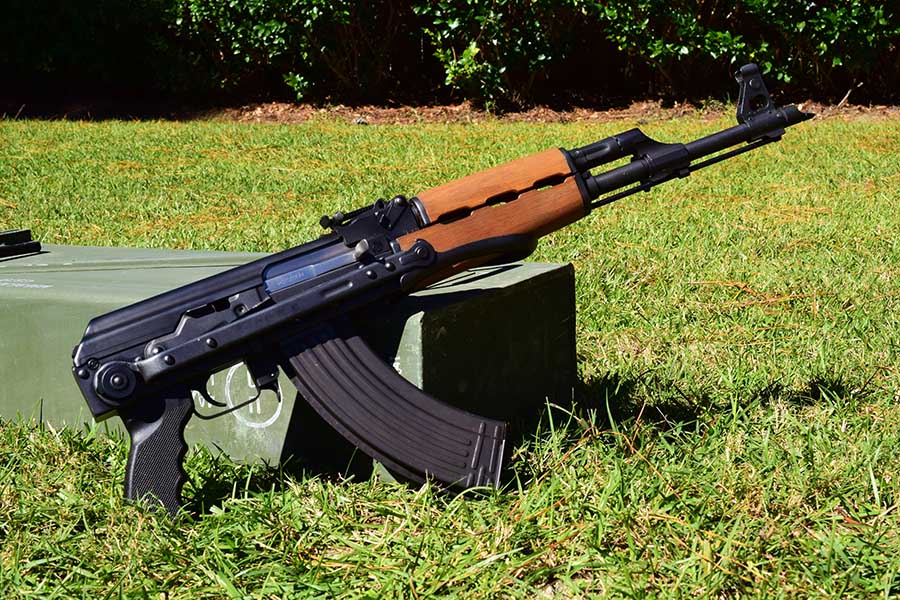 When folded, the N-PAP DF’s stock allow it to be more easily handled in cramped spaces, like the inside of an APC or IFV. (Photo: Jim Grant)

With an MSRP of $658.95 and street prices well below, the N-PAP DF offers shooters the most affordable way to buy an underfolding AK-pattern rifle without having to sacrifice quality. Though it doesn’t take all AKM after-market parts, the weapon does accept the most important one: magazines. First-time AK buyers looking for a quality, military-grade AK rifle under a thousand dollars should look no further than the N-PAP series of rifles.