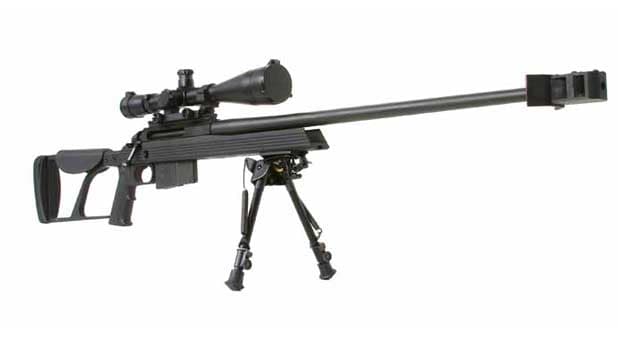 The Armalite AR-30 is a bolt-action tactical rifle chambered in .300 Win. Mag., 7.62 NATO, and .338 Lapua. It was released at the 2000 SHOT Show as a sniper rifle, though Armalite now recommends it for competitive shooting.

The rifle is essentially a stripped-down version of the Amarlite AR-50, meaning Armalite constructed it with less metal so it weighs considerably less. However, neither of the three calibers it’s available in are as large as a .50-caliber bullet, so it’s unnecessary for the extra density.

The AR-30 is bolt-action, so it fires one round at a time and is chambered by hand. The bolt has dual front locking lugs, a relatively simple yet durable design, that allows the bolt to fit tightly into the receiver. It also helps minimize cartridge case stretching, which is beneficial for those who want to reload the spent casings.

A Schilen standard single-stage trigger sets off the action with a short five-pound pull and it uses a detachable box magazine (the factory mag holds five rounds).

The AR-30 features a machined grip frame, removable buttstock, and bi-pod adapter. The bi-pod adapter, made of aluminum and steel, clamps to bottom of the railed handguard allowing the shooter mount a bi-pod.

The AR-30 is set up so a Picatinny rail can be attached. The rail allows easy mounting of optics or other accessories. The rifle has a synthetic stock finished in matte black.

The AR-30 also features a chrome moly barrel, which is an alloy containing chromium and molybdenum. The alloy is much more durable than standard 1020 steel with a chrome lining. This durability assists in extending life of the bore and improves the accuracy of the gun. The rifle is also equipped with what Armalite refers to as a “multi-flute recoil check,” which is a fancy way of saying muzzle break. The device reduces the rifle’s recoil to very moderate levels.

Armalite is an influential firearms manufacturer whose small arm designs have evolved into weapons currently in use today, like the M16 and M4, by militaries around the world. The company is currently based out of Geneseo, Illinois.