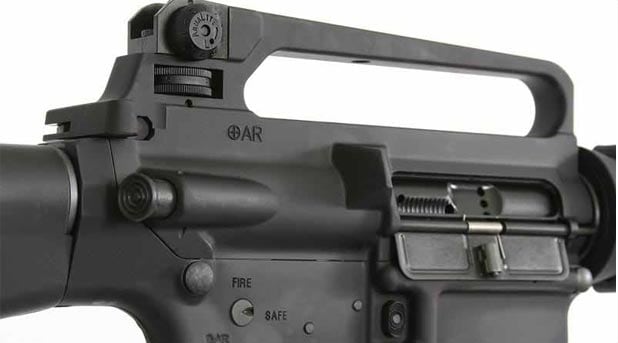 Armalite actually produced the M16 in its early years and the AR10 chambered in 7.62 NATO is pretty close to the original because the US military, at the time, considered 7.62 NATO its standard round.

Though, currently the standard US military round is the 5.56 NATO, law enforcement agencies and military forces in European, African and Central and South American countries use the AR10.

Armalite considers the AR10A2 an all-purpose rifle and recommends it for tactical use,
competitive and leisure shooting.

The AR10A2 uses a gas-operated system, so after the projectile exits the barrel the propellant gases are captured in a tube that cycles back to push the bolt back in turn delivers recoil. The delayed recoil ensures the combustion doesn’t disrupt the shooter’s accuracy.

Features include a forward assist, which is a useful device if a round doesn’t slide all the way in place inside the chamber. All the shooter has to do is tap a button located beside the trigger that controls an internal “assistant” which nudges the round forward.

There’s also an AR10 A2 Carbine version available, too. It is four-inches shorter than the standard and weighs one pound less.

Browse our online store for new and used Armalite firearms for sale.