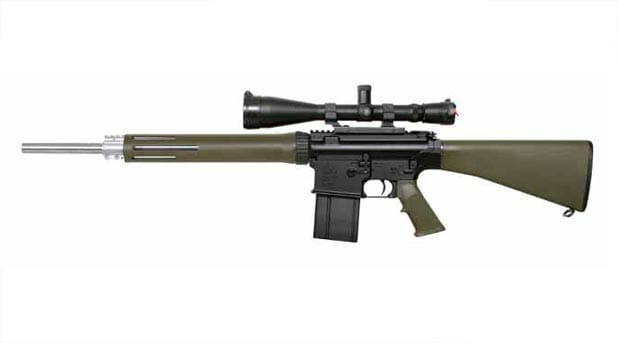 The Armalite AR10 Target is a semi-automatic target rifle chambered in .308 Win. or 7.62 NATO. The AR10T is an upgraded version of the AR10.

Two features in particular make it stand out. First, it has a national match trigger, which is a two-stage trigger that sets off the action with a 4.5- to five-pound pull. The second feature are the free-floating handguards that attach only to the receiver whereas on the AR10 A4 they attach to both the barrel and the receiver.

The free-floating handguards don’t add any stress to the barrel. Armalite recommends the Target for competitive and leisure shooting.

The Target uses a gas-operated system, so after the projectile exits the barrel the propellant gases are captured in a tube that cycles back to push the bolt back in turn deliver recoil. The delayed recoil ensures that the combustion doesn’t disrupt the shooter’s accuracy.

Features include a forward assist, which is a useful device if a round doesn’t slide all the way in place inside the chamber. All the shooter has to do is tap a button located beside the trigger that controls an internal “assistant” which nudges the round forward. The chrome-lined bore is corrosion resistant. And, although it doesn’t have any sights it does have a Picatinny rail for easy mounting for optics.

There’s also a smaller Carbine Target model available. It has a short 16″ barrel and it weighs about two pounds less.