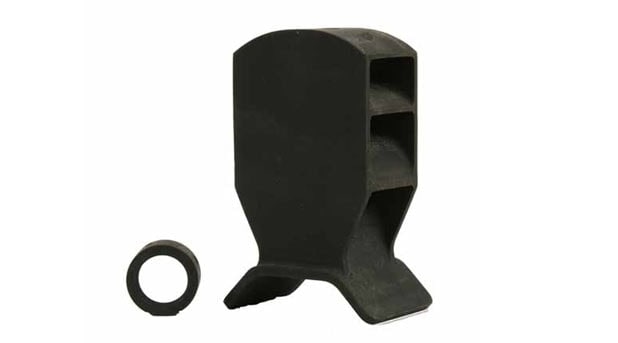 The Armalite AR50A1 is a bolt-action single-shot rifle chambered for .50 BMG. The AR50A1 is comparable to the Barrett M99, but has fewer features.

However, the AR50 is about $1100 less and those missing features, such as a bi-pod and Picatinny rail, can be purchased for around $300. Armalite recommends the AR50A1 for precision shooting.

The AR50A1 is very heavy at around 33 pounds, but that isn’t necessarily a bad thing considering it fires .50 caliber cartridges. The added
weight helps reduce recoil.

Features include a large fluted muzzle brake that, along with the weight, helps reduce muzzle climb when a shot is fired. The muzzle brake’s rearward ports divert propellant gases and since those gases expel off to the sides instead of cycling back, the shooter feels less recoil – less recoil increases accuracy.

Other features include a single-stage trigger that sets off the action with a short five-pound pull. And, it has a free-floated barrel, so as the barrel heats and swells it won’t press against the stock.

Browse our online store for new and used Armalite firearms for sale.