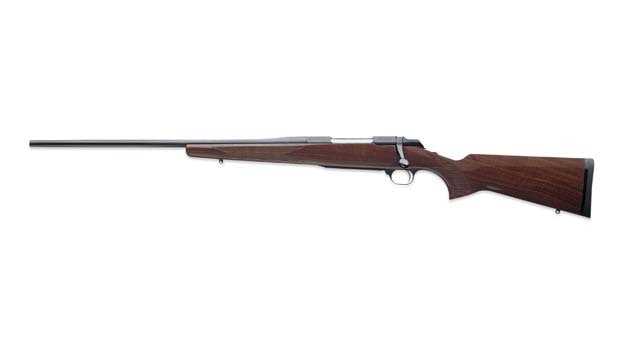 The Browning A-Bolt Hunter, Left-Hand is a bolt-action hunting rifle chambered in .300 WSM, .270 WSM, .325 WSM, 7mm WSM and .223 Rem. The A-Bolt, Left-Hand is identical to the best-selling standard model, but, of course, is designed for left-handed shooters.

The A-Bolt’s action is known for its smooth reloading capabilities. It has three locking lugs that secure it in place and provide it with a short 60-degree bolt throw.

Features include a high-gloss walnut stock with a straight comb. The barrel is relatively long compared to other A-Bolt models at 26″ and free-floats, so the stock won’t interfere with the barrel’s action. On the end of the barrel is a crown, which helps maintain barrel harmonics so the rifle doesn’t vibrate too much and throw off the round’s trajectory.

It uses Browning’s Top Tang Safety, which places the safety on the back of the pistol grip or where the action-hand’s thumb naturally falls. The feature also locks and unlocks the bolt. And it has an adjustable four-pound trigger.

Browse new and used A-Bolt rifles for sale in our online store.