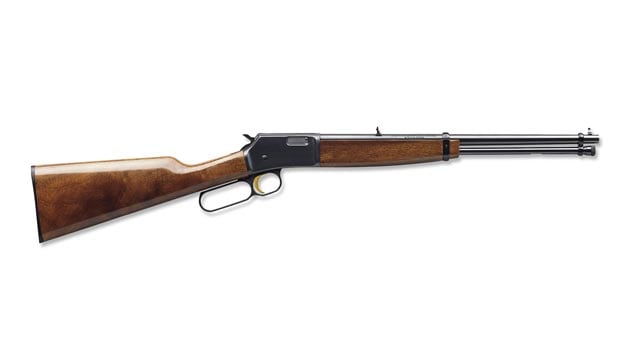 The Browning BL-22 Micro Midas is a lever-action rifle chambered in .22 Short, .22 Long and .22 LR. It is one of six guns available in the company’s BL-22 line.  The Micro Midas sets itself apart from the rest of Browning rifle family by having the longest barrel at 16.25″, meant to increase accuracy. It is nearly 3″ longer than that of the BL-22 FLD Grade I and Grade II models. Browning recommends the rifle for hunting.

The BL-22 Micro Midas features an American walnut stock with a gloss finish and a straight grip. It’s compact 12″ length of pull makes it ideal for smaller shooters. The Micro Midas is also the lightest BL-22 rifle, weighing in at 4.75 lbs.

The rifle also has a a free locking device for safe storage. The BL-22 Micro Midas features a steel receiver with a silver nitride finish. It is grooved for scope mounts and has a raised bead front sight and a folding leaf rear sight, which is adjustable for wind and elevation. The 20″ blued barrel has a recessed crown meant to preserve accuracy. The trigger has a pull of about five lbs. On Grade II models, the trigger is gold.