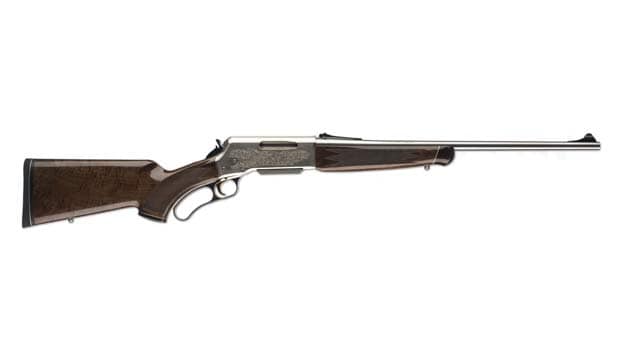 The Browning BLR White Gold Medallion is a lever-action rifle chambered in seven calibers. It is one of nine variants of the BLR offered by Browning.

The BRL is distinct for its detachable magazine, which allows for pointed tip bullets such as the .308 Win. that would not fire through the tubular magazine commonly found in lever-action rifles. Browning recommends the BLR White Gold Medallion for hunting.

The BLR White Gold Medallion features aircraft-grade aluminum receiver with a nickel finish and a high-relief engraving. The receiver is also drilled and tapped for scope mounts. The polished stainless steel barrel varies from 20″ to 22″ based on the caliber.

The BLR’s stock has a checkered pistol grip and forearm with a Rosewood fore-end cap. The rifle’s geared lever and bolt are designed to work with high-pressure magnum rounds. The rifle has adjustable sights and is drilled and tapped for mounting optics.

Browse our online store for new and used Browning rifles for sale.