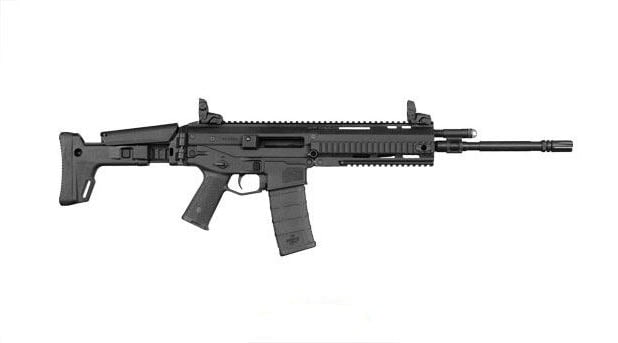 The Bushmaster Adaptive Combat Rifle is a semi-automatic tactical rifle chambered in .223 Rem. or 5.56 NATO and 6.8mm Rem. SPC.

The ACR was designed to basically reinvent the M16. How it’s different is its magazine release, safety mechanism, bolt catch and release are all ambidextrous. It is a versatile weapon able to change caliber without tools or advanced modification. Just simply switch the barrel and bolt face. Unlike the M16, its charging handle is on the side rather than behind the bolt.

The ACR uses a piston driven gas system that directs gas onto a piston, which drives the bolt back, whereas other gas operated systems direct gas into a tube on the bolt.

Features include a full-length Picatinny rail system so shooters can easily mount scopes, sights, lights, or lasers. It has Magpul front and rear flip sights that are adjustable for elevation and windage. And, it also has an adjustable butt stock with rubber recoil pad.