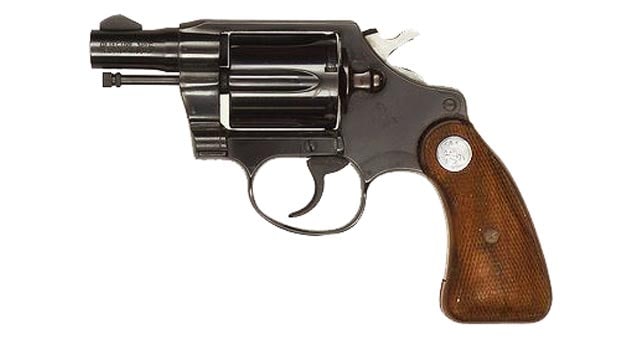 The Colt Cobra is a medium-frame revolver chambered in .38 Special, .32 New Police and .22 LR.

The Cobra was introduced in 1950 and what was unique about it was its lightweight aluminum alloy frame and short barrel. Since its introduction there have been a handful of variants produced and the major differences between them are either caliber or material.

The Aircrewman, which was designed for the US Air Force. How it was different is it has a gold Air Force insignia in replace of the Colt insignia on the checkered wood grips and the cylinder was made of aluminum alloy as well. And because aluminum is lighter than steel, it isn’t known to be as strong. The Aircrewman was only manufactured for two years.

The Courier was chambered in .22 LR and .32 Colt New Police.

The Agent was the economical version of the Cobra and featured a less glamorous finish and smaller grips.

The Viper had a 4″ barrel and was chambered in .38 Special, but it sold poorly the year it was produced, so Colt discontinued it.

The most notable use of the Colt Cobra was when Jack Ruby, a nightclub operator, shot and murdered Lee Harvey Oswald, the apparent sniper who assassinated John F. Kennedy, as Oswald was being transported from the city jail to the county jail in Dallas, Texas.

The Cobra was discontinued in 1981.

Find new and used Colt Cobras for sale in our online store.