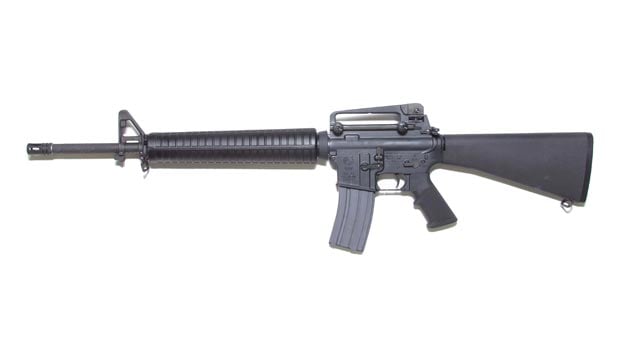 The Colt M16 is an assault rifle chambered in 5.56 NATO. The M16 has been the standard issue rifle of the US military since 1969 and since then many allied militaries have also adopted it. It uses a gas-operated firing system, so the recoil is delayed until the round exits the barrel.

The first addition, the M16A1, had a full-auto option, triangular hand guards and a three-prong flash suppressor.

Years later the US military decided it would rather troops take well-aimed shots instead of spending 30 rounds at a time, so the M16 was updated to the A2 model. Features include a burst option, even though most troops set it and train with it on semi-auto, hand guards were rounded, modified the flash suppressor and added a forward assist that when pressed ensures the round is fully chambered.

Most recently the US military is transition to the A4 model, which, again, has similar features to the A2 except it has a removable carrying handle and a Picatinny rail for easy mounting of scopes or sights.