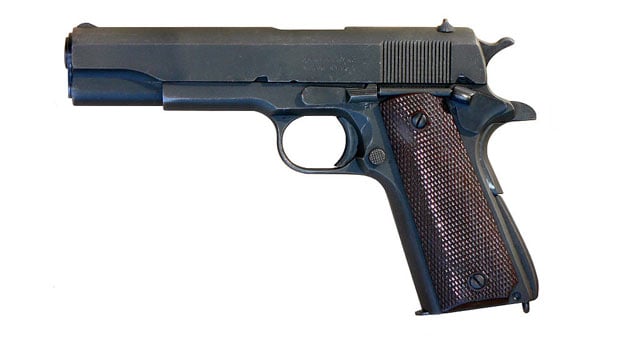 The Colt M1911A1 is a semi-automatic large-frame pistol chambered in .45 ACP or .38 Super. The 1911 has a long history with the US military and, in some ways, became the archetype for pistols today because of its simple design that has remained relatively unchanged since its introduction in 1911.

One feature that makes it so popular is its light recoil, especially for a .45. The recoil is absorbed by its heavy frame that weighs around 2.5 pounds. And, interestingly enough, the 1911 is recoil operated. The expanding gases that push the projectile out also forces the slide back and by doing so ejects the casing and chambers another round.

It has a hammer, but has a single-action only trigger that sets off the action with a short pull. It has two safety mechanisms. A grip safety that rests within the dovetailed curve below the hammer. The grip safety is automatically engaged when not in use, so it cannot fire unless the trigger is actually pulled. This means no accidental discharges if dropped. The second safety is a manual safety that turns on and off with a flip of a switch.

Although Colt is credited with creating the 1911 because it had the government contract, it does have numerous manufacturers. The M1911A1 remained the standard issued pistol until it was replaced in 1985 by the M9 made by Beretta. However, it is still in service within special military units and law enforcement.