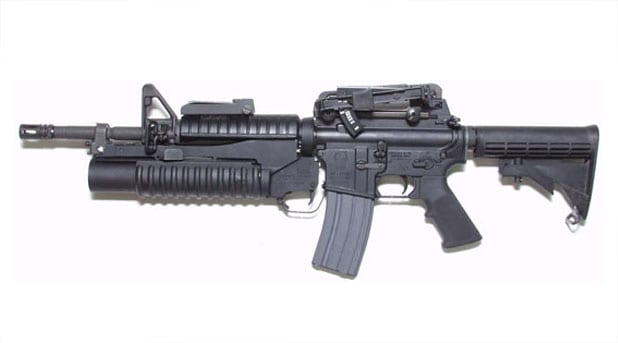 The Colt M203 is a grenade launcher attachment that is chambered in 40mm. Meant to be attached to the M4 Carbine, the M16A2, or A4 Rifles, the single-shot, breech-loaded weapon is also capable of firing 5.56mm rifle ammunition. The M203 can be operated as its own weapon as well thanks to a self-cocking firing mechanism, which includes a barrel latch,
trigger and positive safety lever on the receiver.

The M203 is one of nine Colt firearms designed specifically for law enforcement.

The M203 features a barrel which ranges from 9″ to 12″ and has an effective range of 400 meters. The steel-made attachment weighs 2.5 lbs and features a blued finish. Additional ammunition that works with the M203 includes M406 High Explosive, M433 HE Armor Piercing, and M576 Buckshot.

Colt is a famed American gun manufacturer founded in 1836. The company is best known for its revolvers and pistols, but also produces a variety of civilian and military gun designs used all over the world.