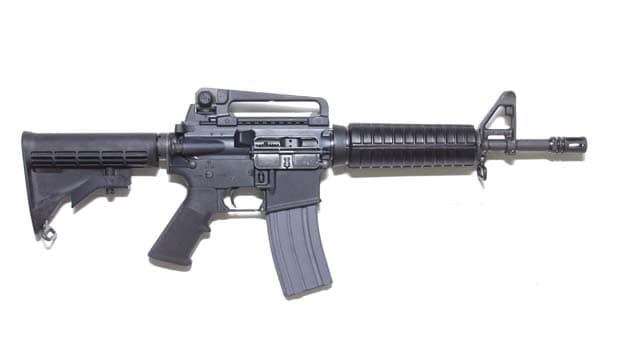 The Colt M4 carbine is a selective fire weapon chambered in 5.56 NATO. It is a scaled-down version of the M16A2 assault rifle, with a shorter barrel and telescoping butt stock.

Originally produced by Colt beginning in 1994, the M4 was meant to replace the M3 submachine gun, some M9 pistols and M16 rifles. A vast majority of its parts are interchangeable with those of the M16A2, but the M4 is lighter and smaller, characteristics that make it a superior weapon for close-quarter combat.

Known for its maneuverability and versatility, the M4 carbine employs a gas operated feeding system in which pressurized gas released from the firing of an individual round is cycled through a tube and used to drive the bolt rearward to both eject the spent casing and the chamber a new round. In a rotating bolt design, the bolt is cycled manually or with the use of captured pressure from the fired cartridge, locking into place between firings with the use of lugs. The M4 is capable of firing up to 950 rounds per minute.

In 2007, the M4 was tested against several other combat weapons including the FN SCAR, the HK XM8 and the HK416. Ten of each rifle were fired 6,000 times each in extreme dust conditions.

The M4 suffered the highest incidence of malfunction with 882 stoppages. The XM8 had the fewest stoppages with only 127. The FN SCAR suffered 226 stoppages.

Taking into account the issues encountered with the M4, the army took steps to develop a cold hammer-forged barrel and redesigned magazine for the M4.

In 2009 the U.S. Army purchased exclusive ownership of the M4 design, so no manufacturer can use the nomenclature “M4.”