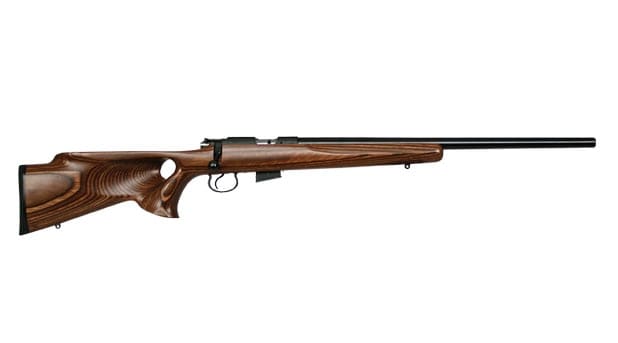 The CZ 452 Thumbhole Varmint is a bolt-action rifle chambered in .17 HMR and .22 LR. The Varmint is similar to the 452 American with a few key differences. The thumbhole stock adds to the gun’s general maneuverability, while the heavy barrel intends to reduce recoil and increase accuracy. Like the American, the guns is not equipped with open sights.

The Thumbhole Varmint has a cold hammer-forged barrel and a trigger that is adjustable for weight of pull, just like all other 452 models. CZ recommends the rifle for small game hunting.

The Thumbhole Varmint features a straight stock is Turkish walnut with a heavier for-end to support the barrel. The thumbhole stock is also laminated. The rifle’s heavy barrel is 20.9″ long.

The receiver has 11 mm r 3/8″ dovetail grooves for telescopic sight mounting, depending on the caliber in use. The gun has an overall length of 38.8″ and a total weight of 7.6 lbs. The Thumbhole Varmint has a detachable magazine with a capacity of five.

Česká zbrojovka translates as “Czech Army”, so it comes as no surprise then that CZ firearms has a long history of supplying weapons to militaries around the globe. The CZ name can be found on a variety of handguns, small bore and big bore rifles, military rifles and submachine guns.

Browse new and used CZ 452 models in our online store.