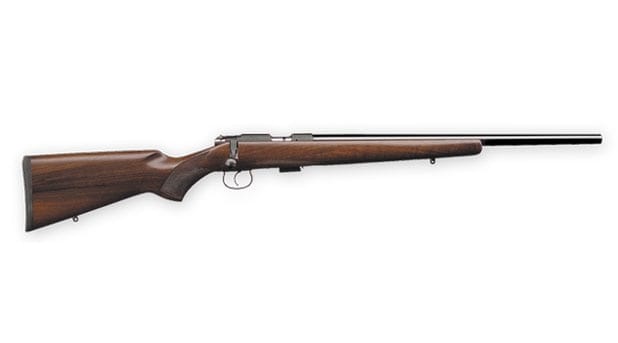 The CZ 453 Varmint is a bolt-action rifle chambered in .17 HMR and .22 LR. The rifle is meant for varmint hunting, which includes rodents (rabbits, squirrels, prairie dogs), predators (foxes, wolves, coyotes) and other invasive species (starlings). The 453 Varmint is very similar to the American in specs and appearance, but features a shorter and heavier barrel.

A lighter weight version of the CZ Varmint rifle with a thumbhole stock for more manageable recoil control is also available in the 452 Thumbhole Varmint.

The 453 Varmint features a detachable 10-round magazine and uses a manual firing pin block as a safety. The Varmint features a 20.9″ heavy barrel finished in blue. Equipped with a straight Turkish walnut stock, the Varmint also features a heavier fore-end to
support the barrel. Like the American, the 453 Varmint doesn’t come with open sights, but the receiver features 11 mm (for
.22 LR shooters) or 3/8″ (for .17 HMR shooters) dovetail grooves for sight or scope mounting.