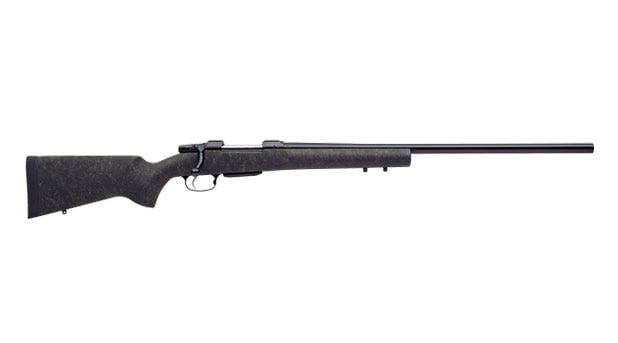 The CZ 550 Varmint is a bolt-action rifle chambered in .22-250 Rem. and .308 Win. It is distinct among the CZ 550 series for having a heavy barrel, which is meant to reduce recoil and therefore add accuracy. The gun comes with walnut, laminate and Kevlar stock variations, each equipped with a four-round detachable magazine.

As with any varmint rifle, CZ recommends the 550 Varmint for hunting small game such as coyotes, wolves, squirrels, and rabbits.

The 550 Varmint features 25.6″ hammer-forged blued barrel. Like all rifles in the CZ 550 series, the Varmint has a square bridge receiver, which is also blued. The various stock options change the weight of the gun, with the Kevlar stock being the heaviest and the wooden walnut stock being the lightest. The gun does not feature sights, but has integrated 19mm scope bases cut into the receiver. The rifle has an adjustable single-set trigger. The safety system is composed of a two position manual safety, a firing pin block and a bolt lock.