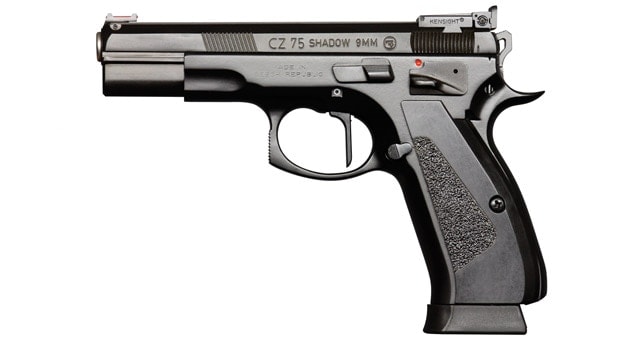 The CZ 75 is a pervasive handgun used by more governments, militaries, police, and security forces worldwide than any other pistol. Originally developed in 1975, the CZ 75 has given way to a number of variants. Because the manufacturer did not originally secure global patent protection for its CZ 75 design, a plethora of copies and variants have been offered by other global arms companies.

The CZ 75 Shadow features all-steel construction and rubber grips. The 75 Shadow includes a barrel length of 4.7″, and an overall length of 8.1″, and utilizes a cold hammer forged barrel. During hammer forging, a tool is carefully passed through the bore to carve the rifled grooves; this process increases durability and precision.

At the 2012 SHOT Show, the CZ 75 Shadow was introduced with a long slide with a dual tone finish, and a heavy bull barrel. It’s called the Shadow CTS LS-P.

Another new gun at 2012 SHOT was the CZ Shadow T-SA. It’s a competition gun with a custom trigger, which is noticeably flat. The trigger is single-action only and it lacks a firing pin block. CZ says removing the block allows for a better target trigger pull. The second unique feature is that it has adjustable rear sights and a fiber optic front.