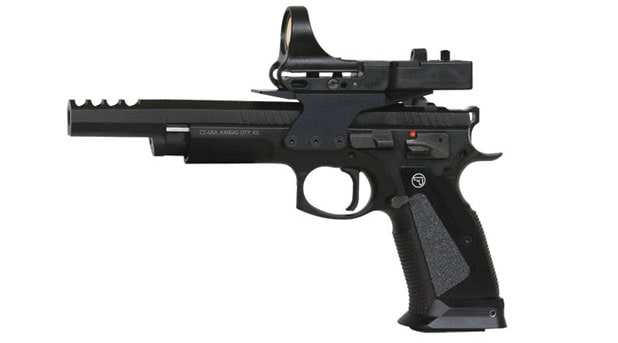 The CZ 75 TS Czechmate is a large frame semi-automatic pistol chambered in 9mm Luger.  It is produced by CZ-USA, a Kansas City based subsidiary of the Czech arms manufacturer Česká zbrojovka Uherský Brod.

The 75 TS Czechmate is a single-action, competition-grade variant of the CZ 75.

It is a pervasive handgun used by more governments, militaries, police, and security forces worldwide than any other pistol. Originally developed in 1975, the CZ 75 has given way to a number of variants. Because the manufacturer did not originally secure global patent protection for its CZ 75 design, a plethora of copies and variants have been offered by other global arms companies.

The Czechmate is specially designed for competitive shooting, and includes all parts necessary to compete in the IPSC Open and Limited divisions. It features all-steel construction, a black polycoat finish, and aluminum grips, and also features a barrel length of 4.7″, and an overall length of 8.1″.

It utilizes a cold hammer forged barrel, meaning a tool is carefully passed through the bore to carve the rifled grooves – a process that increases durability and precision. Additional features include a red dot sight, an aluminum magazine well, three 20-round magazines, one 26-round magazine, two slide stops with slide lock, four slide stop pins, and a spare threaded barrel serialized to match the gun. The Czechmate also features a beavertail grip and competition hammer.

The 75 TS Czechmate is designed for competitive shooting.